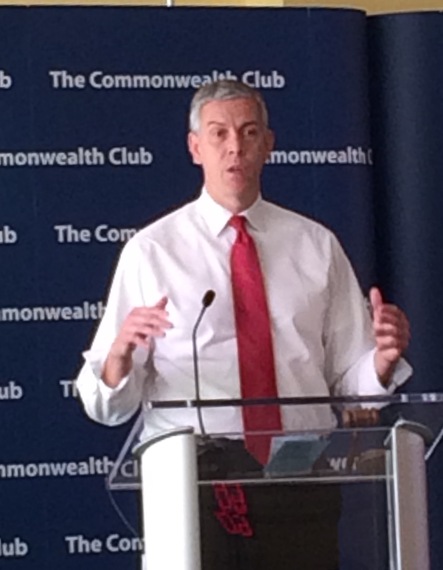 Arne Duncan sounds like a man who is ready to get out of Washington.

At a recent Commonwealth Club of California program moderated by EdSource editor-at-large John Fensterwald, Duncan spoke briefly about educational gains made during his seven-year term as U.S. Secretary of Education -- but repeatedly and at length about the inequities and injustices that remain across the country. His frustration is palpable.

All those debates about Common Core, testing, over-testing? Sideline arguments. "All we can do at the federal level," Duncan says, "is fight for equity, excellence and innovation. Take politics out of it. Figure out how to get better faster. The school-to-prison pipeline is real; suspensions and expulsions lead to crime." And don't even get Arne Duncan started on gun violence.

"The arc of the moral universe is long," the Secretary quoted Martin Luther King Jr. as saying, "but it bends toward justice."

Duncan clearly believes justice is not happening. "It doesn't bend by itself," he says, "or fast enough. The fight is not just about education. It's about increasing social mobility, about keeping good jobs in our economy. From the standpoint of social justice, it's about economics, and about keeping kids alive."

Where is the arc not bending? "With early childhood education. The average child living in poverty starts kindergarten one year behind." With gun violence, which Duncan repeatedly spoke of as closely tied to schools. "There have been more gun deaths since 1970 than in all of our wars combined. And there are too many instances in which the quality of education depends on where you live."

Listing three top priorities he believes must be addressed, Duncan cites early childhood education as number one. He sees no reason why it can't be done. "In the Netherlands, every four-year-old is in kindergarten, and they are working toward extending early childhood education to three-year-olds." Second: "Great teachers matter. In South Korea, teachers are 'Nation Builders.' A teacher in North Carolina is giving blood to help pay the bills." (Speaking of injustice and inequity.) And third: "How do we build demand for great schools, great teachers particularly in poor communities? How do we make it a badge of honor for teachers and principals to go where the need is greatest?"

Duncan cites the fact that in Massachusetts, the nation's top state for education, 30 percent of all high school graduates take remedial classes to get into college. The percentage goes far higher in other states. "Do we want to keep doing that or not? And it is unbelievable to me that we don't take action to end gun violence."

Asked what he'd like to have as his legacy, Duncan fired back, "It's not about me. We have a long way to go, and we must accelerate the pace of change."

With that, Duncan stepped down from the stage. One gets the very strong impression -- hearing him also say that being Secretary of Education was never something he aspired to, but he took the job because of his great admiration for Barack Obama -- that he is more than happy to have stepped down from the national stage and headed back home to Chicago.