Two –- count ‘em -- two Hercules movies will be released in 2014. The first one, “The Legend of Hercules,” stars Kellan Lutz as the son of Zeus and opens in theaters this coming weekend. The second, “Hercules,” starring The Rock (and directed by Brett Ratner), arrives in July. Barring some unforeseen turn of events, however, neither will have the cultural impact of an earlier Hercules film: a low-cost (just $300,000) 1969 feature called “Hercules in New York.”

Forty-five years later, "Hercules in New York" is a cult favorite. This has everything to do with its 20-year-old, first-time star: a man billed as “Arnold Strong," who is known today by the name of Arnold Schwarzenegger.

The plot of "Hercules in New York" is, well ... the title pretty much sums up all you need to know: Hercules is in New York City and hijinks ensue. Watching the film today provides an interesting early look at a guy we’d get to know a great deal about over the subsequent decades. Schwarzenegger is massive, bulky, and his English-language skills are a lot worse than what we're used to from Schwarzenegger. Frankly, he’s not very good. (So not good, that at one point the producers decided to re-dub all of his dialogue; in more recent versions, Arnold’s original dialogue is back.) Regardless, there’s a boyish charm that’s fascinating … and he's just trying so much that it's hard to fault the poor guy.

Also making his first debut with "Hercules in New York" was director Arthur Allan Seidelman. He was just 30 when he was hired to direct “Hercules in New York” –- for a salary of $1,000 a week -– which was almost entirely filmed in Central Park.

Honestly, when I first emailed the now 76-year-old director -- whose credits now span over 50 movies (his next is "Six Dance Lessons in Six Weeks," starring Gena Rowlands and Jacki Weaver) -- I didn’t know quite how this request would be met. (Contrary to popular opinion, not everyone likes talking about their first project. Let’s compare it to if someone called you right now and asked for an interview about a photo that you posed for in seventh grade.) Seidelman's email response read, “It would seem an appropriate time to do so."

Ahead, 14 remembrances and anecdotes about "Hercules in New York."

On meeting Arnold Schwarzenegger for the first time: 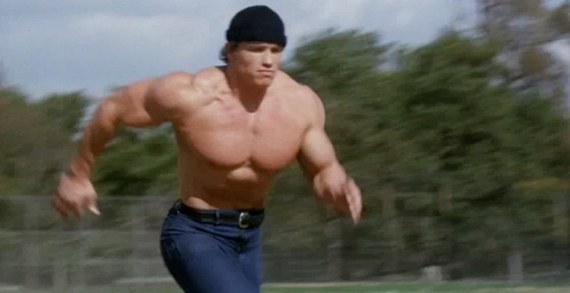 “The first time I met Arnold, I had breakfast with him at a coffee shop up on 72nd and Columbus. He was incredibly charming, as he has remained. He’s a very engaging personality. And that’s what these guys are up against in the new ‘Hercules.’ He’s just an engaging personality. Entirely open, affable, charming -– even with his then very broken English. He was huge. I spent the first three weeks talking to his right arm. His right arm was as big as a person. He was a lot to look at. Beyond that, he was intelligent, sophisticated, did not take himself too seriously.”

On why Arnold Schwarzenegger was moving to the United States:

“I asked him why, what was his motivation. He said, ‘I want to make money.’ But he said it with a smile and charm.”

On Schwarzenegger’s interactions with Americans:

“He was immediately engaging with any female who came within a 50-feet radius.”

“He was very serious about his work. There was no bullshit. He came to work every day and wanted to do it well and do it right. You know, no excuses. He would just do anything that you asked him to do and try his damnedest to do it and do it well."

On the origin of "Hercules in New York":

“The funding was provided by Joe Weider, who was the king of muscle-building programs. He was the guy who put the ‘Are you a skinny kid who gets sand kicked in his face?' ads in magazines … A lovely, lovely man. He was Arnold’s sponsor.”

On Schwarzenegger being shirtless for most of the movie: 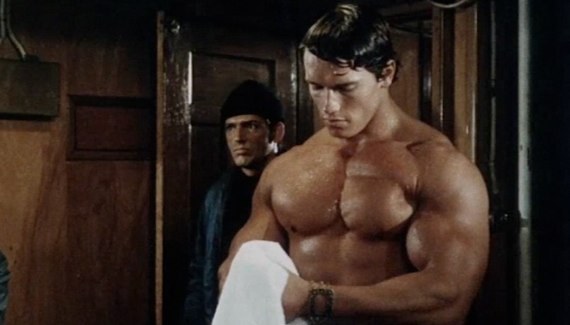 On working with no special effects: 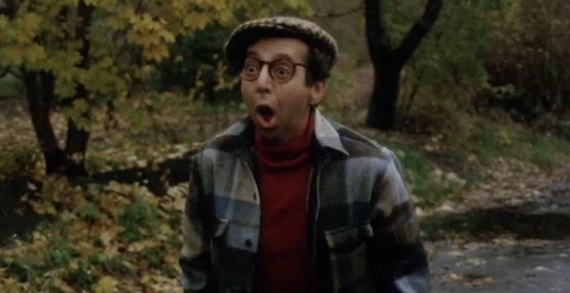 “I used [veteran comic actor] Arnold Stang [his reactions] whenever I needed to convey the amazing feats that Schwarzenegger just did. Stang was a sweetheart."

On a scene in which Schwarzenegger overturns a cab, which looks like a special effect:

“That was a cab with all of its insides taken out. It’s just a frame.”

On Schwarzenegger’s on-screen fight with a man in a bear suit: 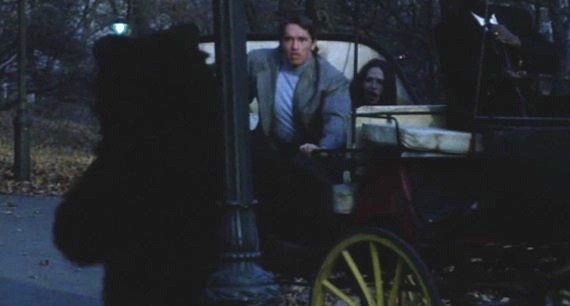 “Intentionally obvious ... You’ve got to remember, this movie was intended as a spoof ... So I decided to do the bear sequence 'silly,' I’ll have to call it."

On his favorite sequence:

“The sequence that amazes me is the chariot ride down through Times Square. I remember doing that just at sunrise, very early in the morning. I don’t know if you could do that now. I’m amazed that we got that sequence.”

On Schwarzenegger’s dialogue being dubbed over in early versions of the film:

“That was a surprise to me. The first release was with Arnold’s voice. The film has made a lot of money for a lot of people; it’s gone through a lot of ownership hands. And whoever bought it at that point decided that Arnold’s voice needed to be replaced. So, they changed his name to Arnold Strong and dubbed him -– and it didn’t work as well! Part of Arnold’s charm was lost in the process. I had nothing to do with it.”

Did he think Schwarzenegger had a future in movies?:

“No [laughs]. I would not have predicted either an action star or governor. He really worked hard. Yeah, if someone would have stopped and asked me, I certainly might have said, ‘With the right material, he could be fun on screen.” But, an actor? You would be hard-pressed to think of him as a serious actor in any way. Or doing things like ‘Twins’ or ‘Kindergarten Cop’ –- stuff that’s just not sex -- that, I would have been hard-pressed to conceive of. But the fact that he was charming and was willing to bust his ass to get it right, that was right there in front of you.”

On the legacy of "Hercules in New York":

“The legacy of the movie is Arnold Schwarzenegger.”

If he’s hesitant to discuss “Hercules in New York”:

“I always find it amusing when I talk at college or acting school and the person introduces me with some of my more recent films -– and some kid will inevitably raise his or her hand and say, ‘You directed “Hercules in New York”!’ There was a period of time when I was doing -– how should I say it? –- more serious material, and had gotten, hopefully, better at it. Then, one day, I’m in my office and I got a call from Arnold [around 1998] and he said, ‘Zeidelman,’ which is the way he still refers to me, ‘do you have a poster of our movie?’ Actually, I had two in my garage. He said, ‘I want to put one up in my office.’ And I said, ‘Done!’ I had it delivered to him and I said, ‘Fuck it, if he’s going to put it up in his office, I’m going to put it up in my office!’"