Some argue that perception is everything. Recent news suggests that just by wearing Google Glass, you can be accused of committing a crime.

On October 30, 2013 Google Glass Explorer, Cecilia Abadie , was cited for speeding and for driving while using Google Glass by a law enforcement officer in California. The Glass related citation was for violating California's Vehicle Code Section 27602, which states that "A person shall not drive a motor vehicle if a television receiver, a video monitor, or a television or video screen, or any other similar means of visually displaying a television broadcast or video signal that produces entertainment or business applications, is operating and is located in the motor vehicle at a point forward of the back of the driver's seat, or is operating and the monitor, screen, or display is visible to the driver while driving the motor vehicle." 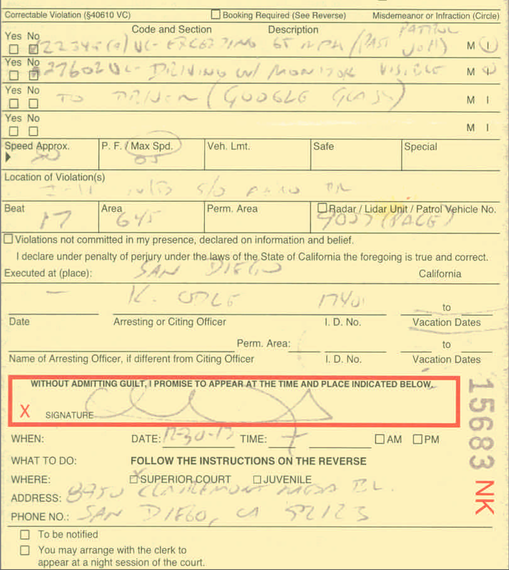 On January 16. 2013 Ms. Abadie was found not guilty when "Commissioner John Blair threw out both charges, stating there wasn't enough evidence to prove beyond a reasonable doubt that the Google Glass was turned on at the time. It is only illegal to wear the device while driving if it is operational." (Cnn.com)

The fact of the matter is Google Glass is a digital device that has the capability of recording video/audio. It can also display information to the users in a moments notice (think text message).

So moving forward, the precedent has been set that if a someone is wearing Google Glass they can be accused of committing a crime. Just like anyone else walking down the street. And just like anyone else, the United States court system will afford the opportunity to those accused of wrongdoing the opportunity to defend themselves. If Google Glass is the digital device that holds the answers to whether or not the crime was committed -- you should immediately seek a competent digital forensic examiner to help you with your case.

In order for law enforcement (or anyone for that matter) to prove that someone was "Driving while using Google Glass" or for "Recording the movie at a theater while wearing Google Glass" they should consider the following questions:

A) Was Google Glass "Active"? -- Unless fully powered down, Google Glass is on and awaiting commands / instructions.
B) If Google Glass was active, what was it doing? Was glass recording video? Displaying information to the user? Showing them a text message? Depending on the claim of wrongdoing, data from either Google or Google Glass must be properly preserved and reviewed by those that are qualified to do so.

Digital Forensics to the Rescue

Google Glass is a wearable computer that can be activated via a few ways:
1) Pointing your head up (similar to shaking your head "yes")
2) Tapping the side of glass
3) Touching the button (pictures/video)
4) Winking your eye

All of the above referenced actions are recorded and logged within the Google Glass hardware. Using the proper methodology and techniques, a competent digital forensic examiner can extract/view these logs to confirm if Glass was operational or not during a given timeframe. Also -- not to complicate matters -- but when the Google Glass "GDK - Glass Development Kit" becomes available, developers can customize the above list and change how Glass natively operates.

Under my direction, students at Champlain College are actively engaged in Google Glass Forensics research. They are looking into how to properly preserve and extract out relevant information which could be used to confirm refute what Glass was doing during a given timeframe. I presented on Google Glass Forensics at the PFIC 2013 conference in Snowbird, Utah in November 2013 - Here is a link to my conference slides that explains some of the research into uncovering the important artifacts from Glass.

So could I prove if Cecilia or the movie patron was using Google Glass illegally?

Yes -- Google Glass is just another data source to consider in an investigation. The data which resides on Google Glass is temporary, but in either case, if Glass had been properly preserved and analyzed,it would have revealed exactly what the user was/was not doing with it.

In May 2014, I hope to be presenting additional research into Google Glass at this year's CEIC Conference in Las Vegas .

Here are some questions I hope to engage my readers with:

Jonathan Rajewski is the Director of Senator Patrick Leahy Center for Digital Investigation and Assistant Professor of Computer & Digital Forensics at Champlain College in Burlington, Vermont, a private institution that offers bachelor's and master's degrees in professionally-focused programs balanced by an interdisciplinary core curriculum.