There are only three episodes left in the debut season of The CW's "Arrow" and The Huffington Post has the first look at a new ad that teases what's to come.

The poster features vigilante Oliver (Stephen Amell) and his duplicitous mom Moira (Susanna Thompson) with the text "Savagery is a family trait." Looks like things are about to get even more brutal in Starling City.

The Huffington Post recently talked to star Emily Bett Rickards about what's ahead in the final three episodes, and the actress promised that this week's installment will give us more insight into the fate of Moira's missing husband, Walter (Colin Salmon), previewing that "the audience will be really happy with where it leads." As for the final two episodes, expect to see our heroes encounter plenty of conflict with John Barrowman in both his Malcolm Merlyn and Dark Archer guises, because Episode 22 is going to be "huge," but the finale is going to be "enormous."

Check out the new "Arrow" ad featuring Oliver and Moira Queen and read the episode descriptions below to find out more, then return to HuffPost on Wednesday for our interview with showrunner Marc Guggenheim. 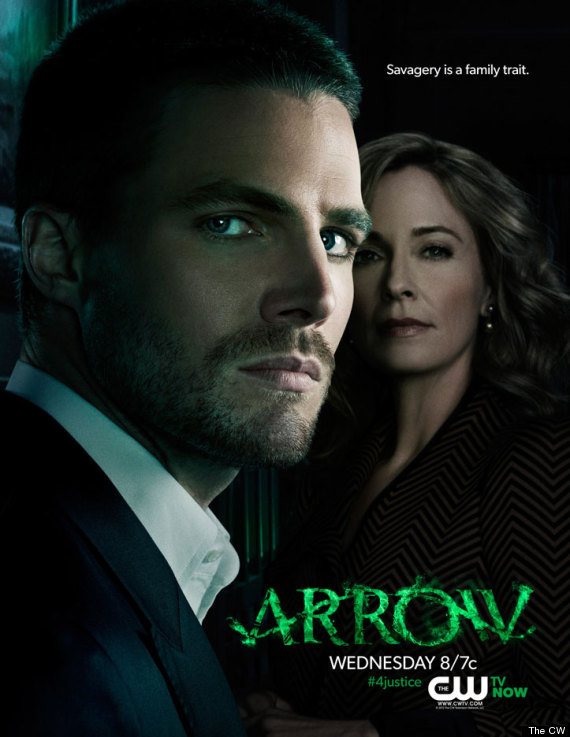 WITH A LEAD ON WALTER'S WHEREABOUTS, OLIVER GAMBLES ON FELICITY IN THE FIELD -- Finding it difficult to mend fences with Tommy (Colin Donnell) and Diggle (David Ramsey), Oliver (Stephen Amell) instead focuses on crossing another name off the list. While digging through a crooked accountant's laptop, Felicity (guest star Emily Bett Rickards) discovers a transaction that could help Oliver find Walter. To reconfirm the lead, Oliver gambles that Felicity can be counted on in the field for the first time. In a flashback, Malcolm (guest star John Barrowman) reveals to Robert Queen (guest star Jamey Sheridan) and Frank Chen (guest star Chin Han) painful details surrounding his wife's murder, and how that shaped his plans for the Glades. Meanwhile, Tommy (Colin Donnell) stuns Laurel (Katie Cassidy) with the truth.

HEROES ARE FORGED AND SACRIFICES MADE IN THIS EPIC SEASON FINALE -- Oliver (Stephen Amell) and Diggle (David Ramsey) race to stop the Dark Archer (John Barrowman) from unleashing his vengeance on The Glades. However, they run into a roadblock after Detective Lance (Paul Blackthorne) picks up Felicity for questioning. Tommy (Colin Donnell) and Oliver's already tumultuous relationship takes a turn for the worse after Oliver makes a confession about Laurel (Katie Cassidy). After hearing of the danger in The Glades, Thea (Willa Holland) races to find Roy (Colton Haynes), inadvertently putting herself directly in the line of fire for Malcolm's (John Barrowman) devious plan. On the island, Oliver, Slade (Manu Bennett) and Shado (guest star Celina Jade) are locked in a life-or-death struggle against Fyers (guest star Sebastian Dunn) as his missiles lock on a full Ferris Air jetliner.