History and current examples show that it can. By itself art cannot change everything, but its effect can be profound. From the Great Depression to present day, art has been a powerful catalyst for advocacy, for building solidarity, and for preserving a history often suppressed in the mainstream. 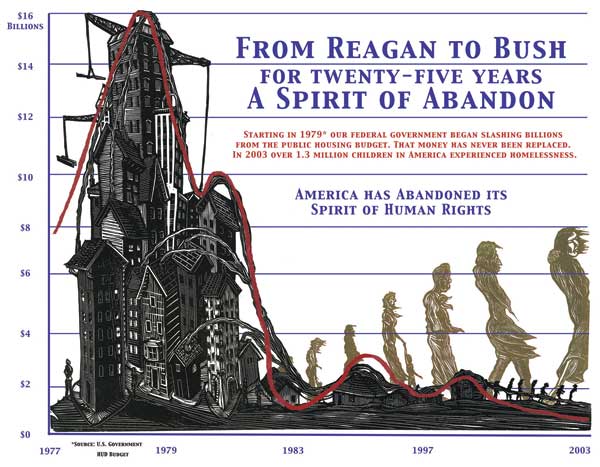 In the 1930s, even the federal government treated artists as workers. Through President Franklin Roosevelt's New Deal programs, artists were employed painting murals, taking photographs, and creating posters, lithographs and woodcuts. Today a poor artist might be offered "life skills training" and job counseling...but certainly not asked, as they were by New Deal programs, to make art at a living wage, with no restrictions on what was produced and no goal of marketability.

The Great Depression was the first time in U.S. history that a widespread movement of artists began addressing politics and using their art to influence society. Artists organized exhibitions on social and political themes such as poverty, lack of affordable housing, anti-lynching, anti-fascism, and workers' strikes. They organized conferences and unionized. They contributed to leftist publications like the Daily Worker, New Masses, and Art Front which emphasized artwork as a regular part of their content.

Artists in San Francisco supported the dockworkers when they went on strike against low wages, long hours and terrible working conditions. Many artists such as Victor Arnautoff, Adelyne Cross Eriksson and Louise Gilbert commemorated the events leading to the 1934 General Strike, while artists like Pele deLappe worked painting signs and cartooning from the moment the dockworkers went on strike.

In 1935, the National Association for the Advancement of Colored People (NAACP) organized an exhibition in New York City, drawing attention to lynching and to encourage passage of a federal law banning it. The Communist Party through the John Reed Club organized an alternative show to the NAACP's to emphasize a more revolutionary approach to fighting what they saw as the class basis of lynching. It included 43 pieces by Hugo Gellert, William Gropper, Louis Lozowick and others.

The times fostered a huge upswing in artists organizing for political objectives. In 1936, the American Artists' Congress formed as part of the Popular Front of a united Left against fascism. It was responsible for bringing Picasso's painting Guernica to New York, drawing attention to rising fascism in Europe.

While artists of the 1930s may not have stopped fascism or eliminated lynching, their work became a powerful tool to raise attention and plant seeds for future struggles. One powerful image can lay waste to a thousand racist, classist political slogans. When artists brought their skills and tools to the struggle for social justice, their work became a vital organizing tool.

End of the 1930s Experiment in Democratic Art

A more reactionary art world attitude was encapsulated by Abstract Expressionist Arshile Gorky who famously dismissed the powerful political art of the 1930s as "poor art for poor people" (1936). The political Right's hostility and the advent of World War II effectively put a end to government-supported arts, and during the post war era, political art withered away. An improved economy, changing art world trends, a revived commercial art market, political fatigue, and even a sense of political art's futility have been offered as reasons for the demise of political art.

However, among the most sinister reasons were the anti-Communist witch hunts of the Cold War era, which intimidated many leftists and discouraged a new generation from making political art. Many lost jobs, faced deportation or had their passports revoked on suspicion of Communist sympathies.

One example of right-wing bullying is Rockwell Kent, one of the most well known artists of the 1930s. A Communist sympathizer, Kent had his passport revoked by the U.S. State Department; he challenged the State Department's authority to revoke passports based on political association and in 1958 the Supreme Court ruled in Kent's favor on free speech grounds. But the underlying message to artists with leftist leanings was clear.

In the late 1960s political art began to make a comeback, addressing the political issues of those times. Artists and artist groups took activist roles, focusing on U.S. intervention in Central America and nuclear disarmament among numerous other issues. One area artists began to be increasingly involved in was poverty and homelessness.

After Ronald Reagan rode to power on a tide of conservative politics in 1979, poverty and homelessness rivaling the Great Depression became visible in cities across the U.S. The federal government set a new goal of dismantling safety net programs that had originated in the 1930s; public housing was defunded, mental health programs decimated, and emergency homeless shelters began opening across the country. By the late 1980s, activists were organizing and artists were responding to the crisis.

In response to homelessness, street newspapers emerged to give voice to the experiences of increasingly marginalized people, often using art to dramatize the words. San Francisco's Street Sheet, the oldest continuously published newspaper about homelessness in the US (1989), and Oakland's Street Spirit (1996), published by the American Friends Service Committee, have always used paintings, cartoons, woodcuts, screenprints and drawings to address economic justice and homelessness.

The San Francisco Print Collective (SFPC) was founded in 2000 by a group of artists aiming to use graphic arts to support social justice organizing. SFPC's first campaigns focused on gentrification in San Francisco's Mission District. Displacement of poor people again became a rallying cry for artists. SFPC uses screenprint posters, banners and murals created in collaboration with organizations including the Coalition on Homelessness and the Mission Anti-displacement Coalition.

In 2006 (update 2010), Western Regional Advocacy Project (WRAP) published Without Housing: Decades of Federal Housing Cutbacks, Massive Homelessness and Policy Failures. Its wide circulation (over 40,000 downloads) is due in part to its use of imagery that visually portrays statistical evidence. Images can carry the meaning behind the message in a way that numbers never can.

WRAP is an example of an organization that brings artists into the activist realm. It's a mutually beneficial union -- artistic imagery can help educate and build emotional commitment in both artists and the public.

Another example that joins artists and activists is an exhibition curated by Art Hazelwood, Hobos to Street People: Artists' Responses to Homelessness from the New Deal to the Present; currently touring museums in California and Colorado. A book based on the show has been published by Freedom Voices press.

Art never affects the world in a vacuum. It exists as a part of culture. Political art standing against repressive forces in society is part of the culture of change. Political art affects the real world as part of the force that keeps the human spirit alive. It keeps the flame of justice burning. It keeps memory alive. It moves with the struggles and moves the struggles forward.

Art Hazelwood contributed to this article and created the artwork shown for WRAP's Without Housing report.