Last time, I told you about a chain of events triggered by running into artist Dorian Vallejo at Steven Assael's drawing show at Forum Gallery. Today I'd like to continue my incomplete portrait of the art scene in New York at the end of 2013 - incomplete even as to my own little corner of it. But still, better than no account at all.

The holidays were nearly upon us, and I went to the New York Academy of Art's Christmas party, called Deck the Walls (because they have art by students and faculty on the walls). I've gotten invited to these things a few years in a row now. I think they invite people who donate art to their fundraiser auctions, which I do, because I like the art that Academy graduates are making, so whatever they're teaching over there, I'd like them to continue to have a chance to teach it.

The parties happen in the main room of their building on Franklin Street, in Tribeca, and are invariably packed and difficult to navigate. What I like to do is alternate between finding somebody I know and talking with them, and finding the bartender and obtaining a drink. At this particular party, I mostly spoke with two people I'm very happy to know.

One is Michelle Doll. I nominate Doll for the John Shaft Award for Keeping It Together: she got an MFA from the Academy, paints beautifully, and dresses fabulously. She's done all this while raising her son alone. Like Dorian Vallejo, and Claudia Hajian, she is an incredibly sweet individual. Here's one of her paintings: 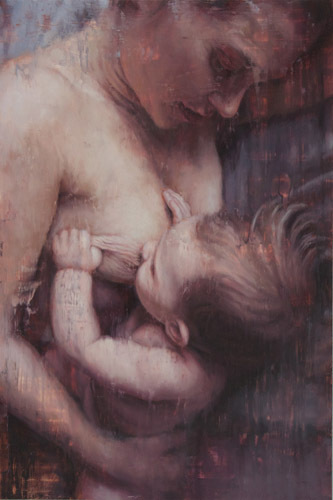 Considering it again, it's a thing apart from the rendering I saw the first time that speaks to me now. This time, it's the warm-toned abrasions or marks on the surface. These run through the work, indiscriminate of the object they overlie. They serve to unify the composition formally, and thus the mother and child thematically. They are the undertow that sweeps the two of them in together, preserving them during this interval as one flesh.

The other person I spoke with quite a bit was Lisa Lebofsky. Lebofsky is a painter who has done something I've considered but never done, for all that I would like to and admire her having pulled it off. I am, like her, attracted to the colder regions of the Earth. Unlike me, she went deep into the lethal, endless cold, and dragged images out of that beautiful, hostile land for her art: 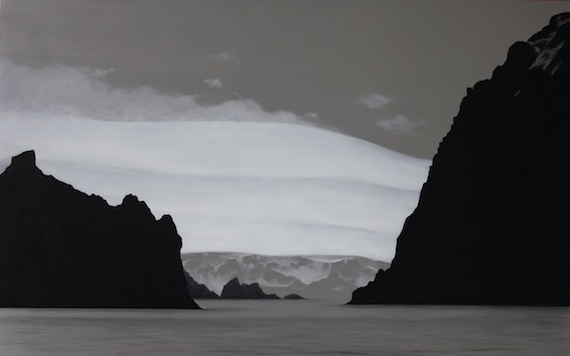 I am awed by this.

I don't know Lebofsky well, actually, and a lot of our conversation involved getting into sync. Neither of us could remember whether, or how many times, we'd met. She knows my writing and painting, and I know her work -- in fact, I've been in her studio. As for hanging out, though, it was unclear.

I've been in her studio because a friend of hers showed it off to me. I guess we kind of broke in, you're not really supposed to go in somebody's studio when they're not around. Lebofsky's friend is Bonnie DeWitt, whom I think of as the angel of the Lower East Side.

DeWitt is a painter and the director of the oddly-located Kraine Gallery. As a painter, she has a cheerfully perverse sensibility, like an early Renaissance narrative painter, or a German fairy-tale writer: 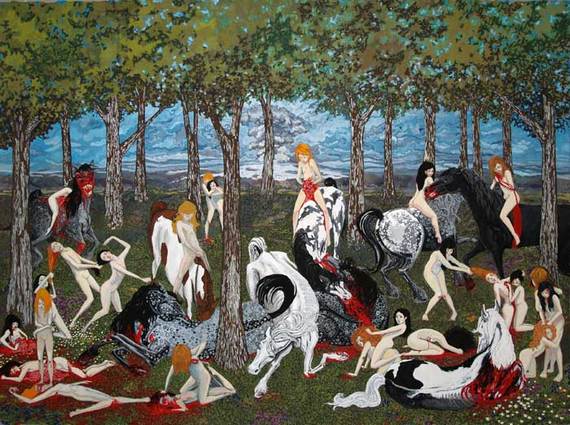 I actually don't know her artwork extensively: She has foregrounded her curation in my encounters with her. DeWitt is a tiny little twinkly pixie with red hair and a black leather jacket, Faye Dunaway cheekbones and a startlingly deep, dry voice. If you've looked at network maps at all, you'll have seen the famous nodes -- points with large numbers of network connections. In social networks, these nodes are people whom everyone knows, even though the members of this "everyone" may not know one another. DeWitt is a natural node. She knows and adores all the artists in a certain sector, and is reciprocally known and adored.

When I think of punk rock, I think of DeWitt. I think very highly of punk rock, but I should emphasize that my actual contact with it in the world is minimal. I have constructed my own punk rock in my head, taking some of the trappings of the real thing and fashioning the thing I deduced and needed. My personal punk rock is a combination of intense oneselfness, combined with a fuck-you attitude toward authority, and a bracingly nihilistic edge, a sense that it would be better for it all to burn down rather than to keep on going as it is. In this sense, DeWitt is punk rock.

She approximately haunts the Lower East Side, in which I include the East Village. Much of this zone is still poor enough for artists to inhabit, and it is infested with studios and little galleries, including my own, Dacia Gallery. Many of these artists are the outcasts of the art world - they are the high-rendering figurative painters. Ranging from the deeply expressionist to the tightly academic, these painters grapple in their work with the same contemporary cultural issues as more mainstream art world players. But because of their helpless and unswayable adherence to representation in their work, they have been consigned to the ecological niche that gave rise to punk rock (well, punk rock as I imagine it) in the first place: financially hobbled and socially outcast.

In such conditions, a punk attitude naturally results. Among the artists I've met in this neighborhood, there is a warren-like, off-grid feeling of community, and an edge of point-blank starvation, and above all a totally natural sense of selfhood. These are people who cannot be other than themselves, and they've got their poverty, and the indifference or scorn of the mainstream, to prove it. To this talented, alienated cohort, DeWitt addresses an attitude of boundless, broad-winged love; and to the rest of the world, the flaming sword.

Hence, the angel of the Lower East Side.

The Bottom of Chrystie Street

Sadly, DeWitt wasn't at Deck the Walls. I had a fair amount to drink, but I had a second thing I needed to get to the same evening, so I ventured out into the winter cold in my suit jacket (who wants to take a coat and carry it all evening?). I had to get to The Lodge Gallery, on Chrystie Street, to see a drawing in "TGF Sports," a group show. The drawing was by the marvelous Jean-Pierre Roy.

Chrystie is a ways east of the Academy, so I had some walking to do. Unlike driving drunk, it seems you can mostly only hurt yourself by walking drunk. So I feel little compunction about praising the practice. I like walking around Manhattan very much, and I especially like walking around Manhattan while tipsy, and if possible, alone, at night, underdressed, in the winter. The textures of surfaces seem coarser, the lights more colorful, the towers more majestic. Individual people are more distinct from one another, and store windows endlessly fascinating. The light spirit of New York, of plans and their fruition -- the glamor of the city -- shimmers on everything under these conditions. One feels a feeling of being at the start of things, of excitement and high hopes.

In such an open mood, you discover new things. What I discovered is that at least some of those peculiarly cheap Chinese bus lines one hears so much about have their depots at the bottom of Chrystie Street. Did you know that? I didn't know that. I could have hightailed it down to Raleigh that night, although I didn't.

My advice about getting blitzed and strolling around a city at night might not be good advice for you. You might not be a 6'1" man. Or, you might not have the good fortune to react to moderate inebriation by experiencing a sense of universal affection and goodwill.

I made it to The Lodge, and saw Roy's spellbinding drawing, one of his highly detailed envisionings of himself occupying dreamily unlikely situations; in this instance, a quotation from Rambo III -- two of Roy, bandanna'd, playing the Afghan sport of buzkashi, which is like polo but with a headless goat, bien sûr. 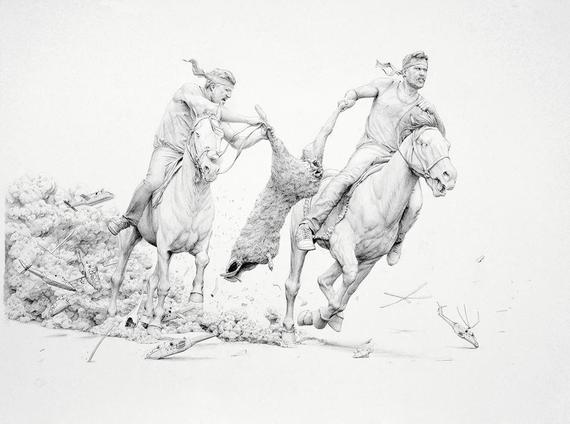 Jean-Pierre Roy, May god deliver us from the venom of the cobra, the teeth of the tiger and from 80's American cinema, 2013, 22"x30", graphite on paper

I only saw Roy for a minute, which is too bad, because I like him very much. He's one of the few people I know who makes me feel a little short and insubstantial. He is an enormous bear of a man, sincere and outgoing, enthusiastic about his teaching and painstaking in his strange, ambitious work.

Instead, I spent most of my time at the opening chatting with Noah Becker. Becker and I have been interviewing one another here at Huffington. We are both figurative painters, but our approaches are very different. 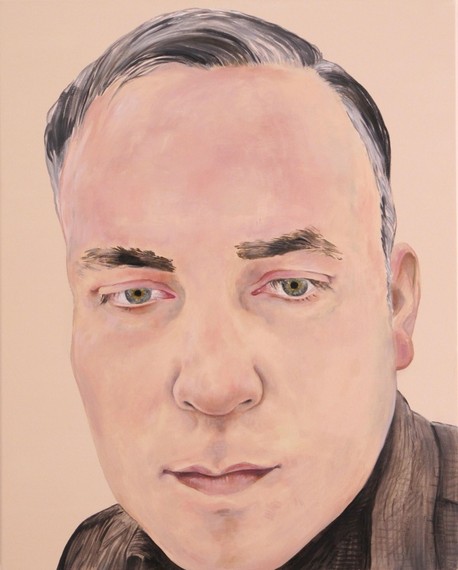 In reproduction, Becker's work is nearly inscrutable -- flat of affect, icily moderne, stripped of context and implication. He founded Whitehot Magazine and plays jazz saxophone. His answers to interview questions are frustratingly tangential. As one feels in encountering an image of his work, I felt I could deduce almost nothing about him personally. He seemed intimidatingly cool. Before I met him, I was a little frightened of meeting him.

I first saw his work in person at his solo show at The Lodge. It turns out that his paint, like mine, is thinly applied. There are hesitations and lacunae in it. You can see through it in passages to the faint ink scribbles of his underdrawings. The colors, which seem so blank on a screen, vary subtly in the flesh, a variation which betrays a diffident affection for paint and for sight.

Similarly, he is himself more rounded and human in person. To my enormous relief, it turned out that when I met him, I liked him, and the reverse seemed true as well. His encyclopedic interest and knowledge of art and the art world is modified by a quirkiness and self-doubt which make it possible to converse with him. 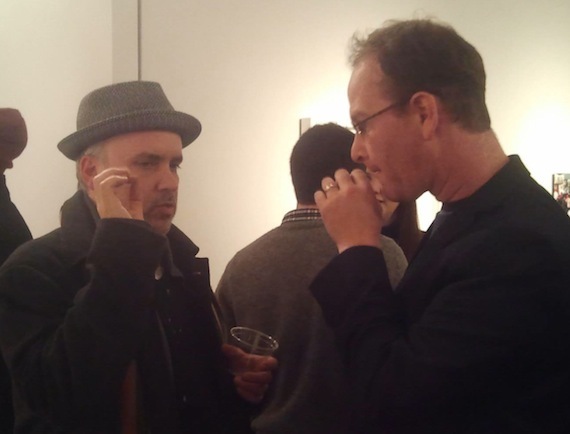 The Lodge Gallery, the night in question.

Fascinating historical note: it was this picture which convinced me
to keep my hair buzzed to no more than 1/4" in length from now on.

I have nothing interesting to report about our conversation at the Lodge. It was mostly in regards to the ins and outs of e-publishing. He wanted to hear about the technical factors I experienced e-publishing the first novella-sized chunk of Railroad to Zanzibar, my epic historical fantasy novel.

Which, incidentally, is linked right below the end of this piece. It's 99c and I think you ought to order a copy, because I have put so much effort into writing divertingly on art for you all this time and you'd like to support me, right? -- and also it's the start of an amazing story, in my humble opinion.

The third and final part of this series very shortly. In the meantime, happy new year to you.

ALL ARTWORK COURTESY OF THE ARTISTS