Thanks to a 2013 "Our Town" grant announced last week by the National Endowment for the Arts (NEA), one might envy Brownsville as the place to be for public art and a sense of community. This good news counters what is usually reported about about the quaintly named Brooklyn neighborhood, which has the country's greatest public housing density, and the unfortunate claims to New York City's highest death rate from diabetes, and highest number of shootings in 2012.

But on July 17, 2013, Brownsville stood out for being the only New York City location to receive one of 59 national NEA grants that fund projects that "engage the arts to help shape the social, physical, and economic character of communities." The federal agency selected the project "Transform/Restore Brownsville" from among 254 eligible applications. It's the brainchild of Groundswell Community Mural Project, which since 1996, has used mural art as a tool for social change in more than 400 locations across New York City, bringing artists, youth and community organizations together. The Brooklyn-based nonprofit has partnered with the NYC Department of Probation and Brownsville's Pitkin Avenue Business Improvement District (BID) for the $100,000 grant, which is well above the $50,000 median grant awarded.

The two-year plan for "Transform/Restore Brownsville" has professional artists working with youths, among them 40 youths on probation, to create murals on five vandalized sites within the Pitkin Avenue BID, which runs 10 blocks between Howard Avenue and Mother Gaston Boulevard.

This isn't just about painting attractive public art; the process also includes conducting interviews and surveys with community members to identify Brownsville's "hidden strengths," which will then be represented in the murals. Not only do area residents and shoppers see community pride on the walls, but youth gain new skills for their resume. Amy Sanaman, Groundswell's founder and executive director, says a project typically requires 190 hours from each participant, which she points out is more time than an entire year of high school English class. "Half of the project is research, design, and getting it approved. In the process, there are kids who discover they would like careers in arts, animation, advertising. There are others who want to go into politics or community organizing. There are all kinds of skills they are exposed to, including the math it takes to transfer a design to a wall."

The "Restore" in "Transform/Restore Brownsville" isn't about historic preservation or returning to a particular era. It refers to the "Restore to Justice" approach in probation, which allows people who have committed crimes to give back to the community they've harmed.

According to the NYC Department of Probation, one in 12 Brownsville men between the ages of 15 and 24 are in prison. Working with Groundswell is just one of the options Brownsville youth---young men and women---can choose as part of their probation for offenses that can range from stealing cars to hopping a turnstile. Probation Commissioner Vincent Schiraldi clearly sees Groundswell's benefit to the community and also to participating youth.

"This helps young people square the ledger," Schiraldi explained. "One of the young men said to me, 'I felt I owed something. And now I'm even.' It's not only amends, they're better people for it at the end. That's an important part of restorative justice. You also have a new skill set and are a more marketable person. We've been trying to take community service from being a meaningless, rote activity to something that adds value."

That value is especially evident to merchants in the Pitkin Avenue BID, which like Groundswell and the Probation department, is contributing funds and services to the project on top of the NEA grant. Daniel Murphy, the BID's executive director said, "I have a great board of directors that understand the integral nature of joining the commercial district to the neighborhood. We're part of it, not separate from it. Arts bring folks from down the street to the avenue."

Asked whether some merchants balk at supporting a project that might include youth who are labeled as trouble, Murphy answered, "For the most part, the merchants like the program because it's energy and activity. Business people like that. The pay-off is long term."

Like other national agencies, the National Endowment for the Arts felt the first inauspicious blow of the 2014 budgeting process this week. On Tuesday, a U.S House of Representatives subcommittee submitted legislation that would cut the agency's funding in half to $75 million. The funds for "Transform/Restore Brownsville" are secure.

The Our Town grant program, in its third year, demonstrates that arts funding isn't limited to stages, studios or museums, but also goes to activities that improve public spaces, increasing one's sense of safety within one's own neighborhood. Commissioner Schiraldi acknowledges that art is a bridge between people in New York. "We've partnered with Carnegie Hall, Paint Straight, Artistic Noise. The New York art community is incredible and do not stick their noses up in the air at criminals. They're actively working with people. They are fantastic." 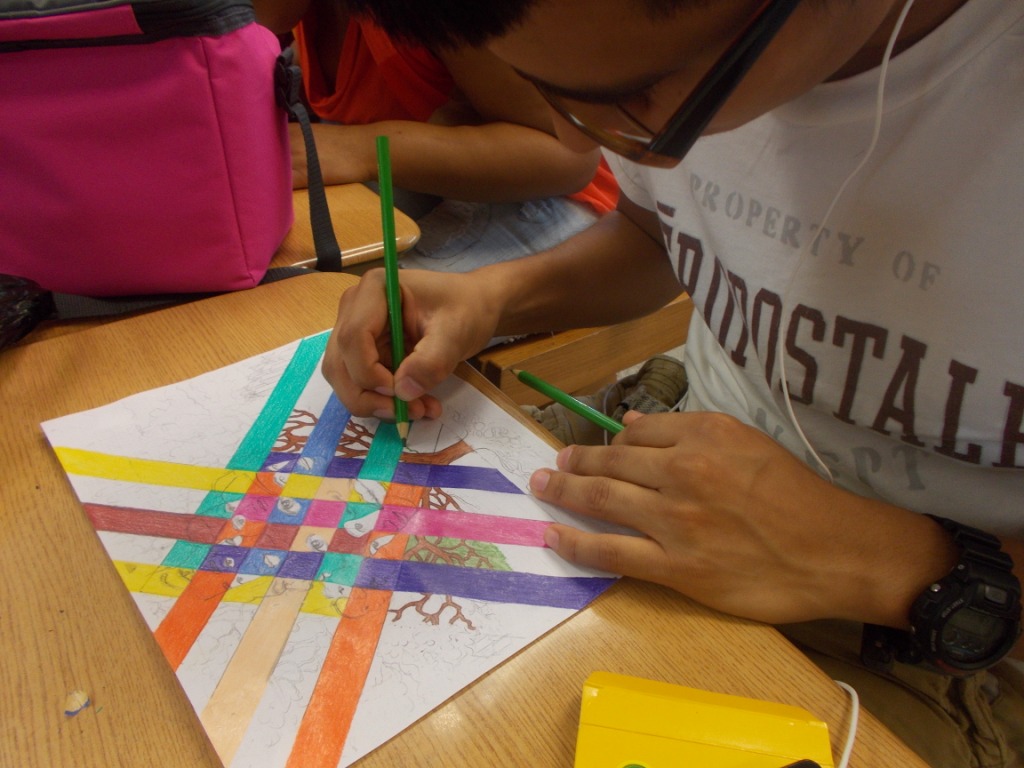 Youth are working with Groundswell right now, designing a mural to go outside the Lane Bryant store at 1550 Pitkin Avenue. This one is a partnership with the NYC DOT, Pitkin Avenue BID, and the Brownsville Community Justice Center. To be completed this summer, the mural is a sign of five more to come.