For her series, 'The Pig That Therefore I Am', Korean-American artist Miru Kim curled up next to swine in hog farms, her naked flesh pressed up against pink animal skin. This week for Art Basel, Kim is recreating the experience on a smaller scale at Primary Projects. Yesterday through Saturday, the 30-year-old artist will spend 104 consecutive hours with pigs in a makeshift pen at the front of the gallery. Here's the livestream video of her performance, I Like Pigs and Pigs Like Me.

Before she entered the pen yesterday, Kim, a self-admitted germaphobe, told the Huffington Post that getting down in the hog farm muck wasn't easy. “It's a very concentrated industrial environment, so the level of smell is toxic. I get into a mental zone when I am doing a shoot. After I'm done, however, if I can't get the smell off my feet, it's very disturbing.”

She was inspired to do the series after reading French philosopher Michel Serres's book Five Senses: A Philosophy of Mingled Bodies, which explores the characteristics of skin. Kim continues, “Skin is not only an envelope protecting the inner body, or a membrane that allows exchange between exterior and interior of the body. It also serves as a mingling point between the outer world and inner self, and between body and soul. In the close-up photos of skin, I appeal to the idea that all living beings are essentially alike." After several pig dissections as a pre-med student at Columbia, the New York-based artist was struck by how physiologically similar pigs are to humans. As she told Cool Hunting, “Pig eyes are remarkable. I find them more human-like than domestic pets like cats and dogs. Eye contact with them was shocking and mysterious, because their looks were so strange and yet so familiar.”

The daughter of one of Korea's most well-known philosophers, Kim's art is infused with existential dilemmas tracing back to Jacques Derrida, René Descartes and the Bible. For her Miami project, the title, 'I Like Pigs and Pigs Like Me', is derived from Derrida's 'The Animal That Therefore I Am'.

She told the Huffington Post, “Derrida critiques the relegation of animal life that has occurred since Descartes's distinction of man as a superior rational being separate from all other living species. This relates to the Western tradition of separating soul and body as dualistic entities, and that animals lack the soul, therefore they are to be dominated by humans.

Christians have always justified man's dominion over every other living being by quoting the Bible. I tend to gravitate toward the Buddhist perspective that all living beings are connected in a circular way via life force or qi. When I mingle with pigs, I feel my existence more then ever, and Cogito ergo sum is faulty in that case. It's not that 'I think, therefore I am,' but rather, 'I am, therefore I feel.'"

Ultimately, Kim hopes her live performance piece in Miami will convey what the photo series couldn't: “I want people to feel the process of my body mingling with pigs, the sense of touch that is harder to grasp in the final photographs.” See Kim and her pigs in the front window of Primary Project through Saturday. She'll be down in the hay day and night. 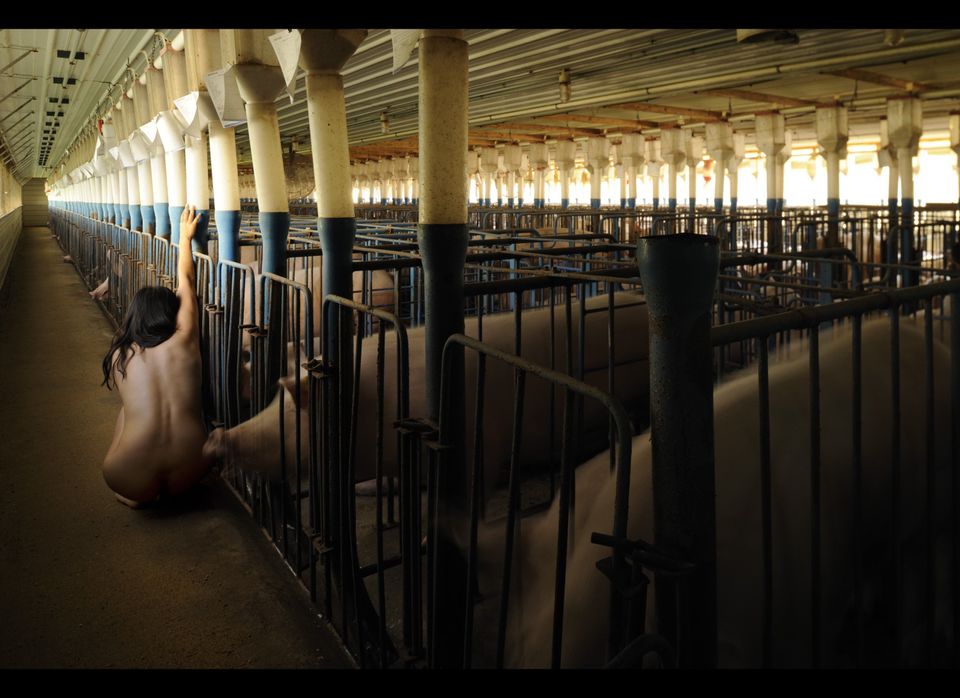