Good news, art world. Art Basel Miami Beach has come to a close and your various social media feeds will soon return to their normal states. You can exhale now.

The past week came with sunshine, booze, celebrities, hotels, hangovers, tiny food on long skewers, dirty looks, slinky ensembles, unforgivable fedoras, and, of course, the art. We've compiled a list of the 11 artists whose work stood out amongst the hundreds on view. Artists from around the world and across the board in genre and medium. Artists whose work was even greater a treat than a much-needed espresso after a day of fair hopping. Here they are -- the 11 artists heating up Miami Beach this winter. Keep an eye on them in the art-centric year to come. 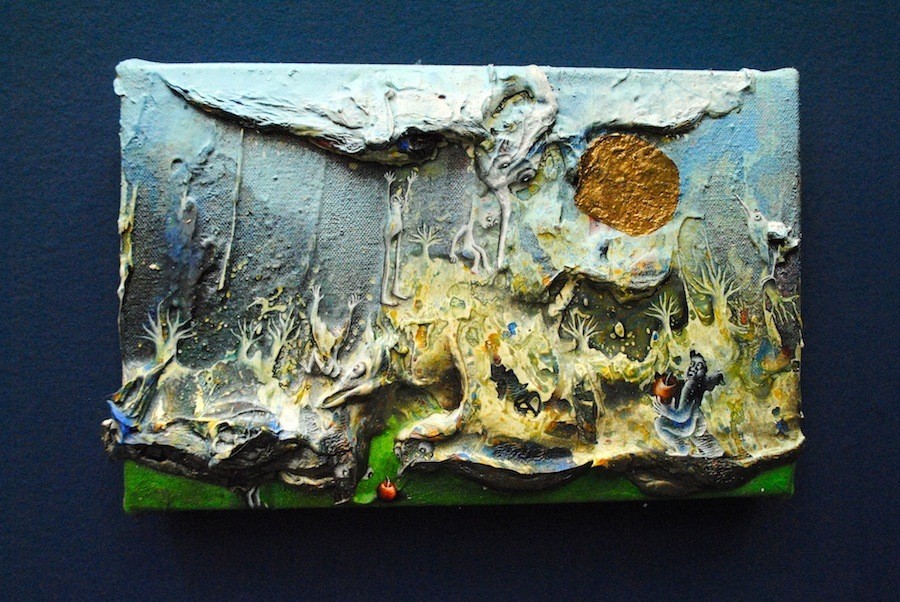 The French artist's brand of dizzying surrealism combines the dread of Hieronymus Bosch with the playfulness of Kenny Scharf. The multimedia hallucinations seem to grow out of the materials that made them, only to eventually lose momentum and melt back into a dripping dream state. 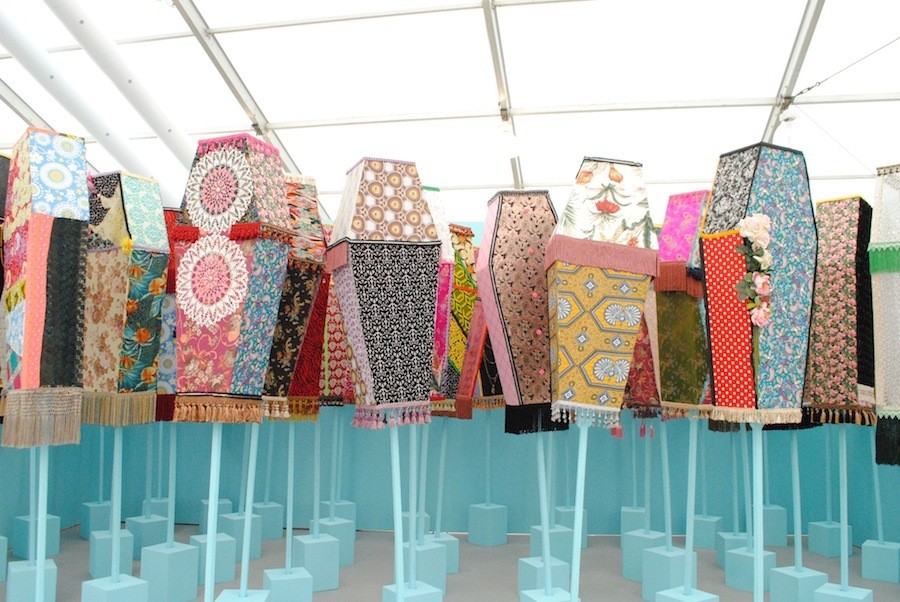 Monique Meloche Gallery was filled with this Jamaican artist's brilliantly patterned coffins, adorned with fringe, beads, flowers and lace. The Patterson Project, made in Kingston, Jamaica in April 2014, couple a fanciful first impression with a macabre aftertaste. 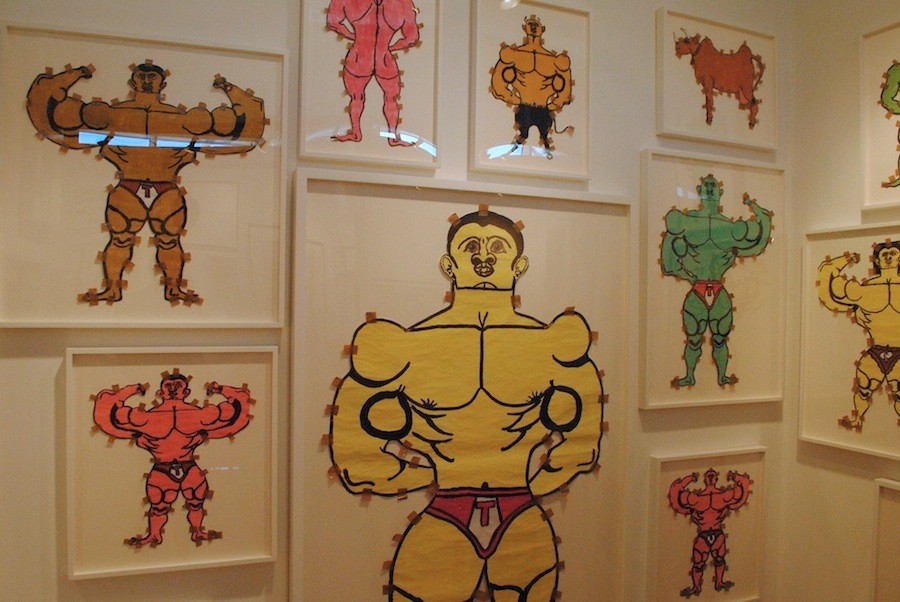 Pedroso, based in Cuba, was born with severe hearing loss and thus has spent most of her life communicating through non-traditional methods. She visually expresses herself using a repeated pattern of brightly colored figures, at once hyper-macho and occasionally androgynous. The nude forms, resembling pro-wrestlers or mythical demons, are cut-out and installed on the wall of her family’s home with the help of meticulously applied tape. 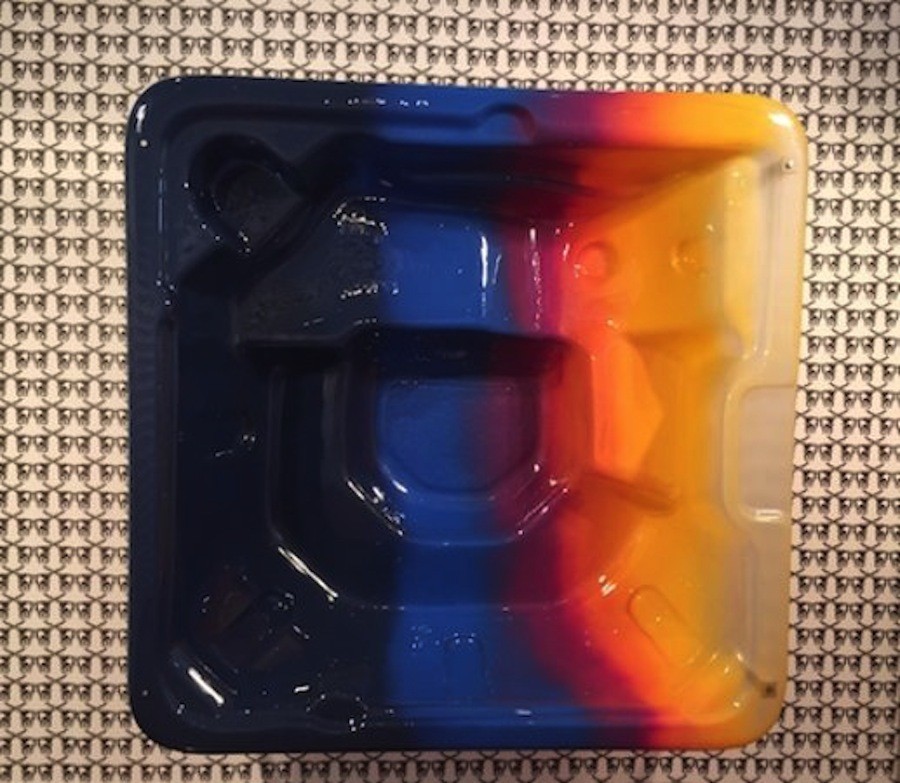 The Los Angeles-born artist captured the luxurious spirit of Miami with this rainbow jacuzzi at the entrance of NADA. Only the piece wasn't originally an indulgent party toy; it was created by California’s Candido Jacuzzi in the 1940s to combat rheumatoid arthritis. Tajima painted the polychromatic pool with enamel, adding a psychedelic touch to the mounted plastic bath. 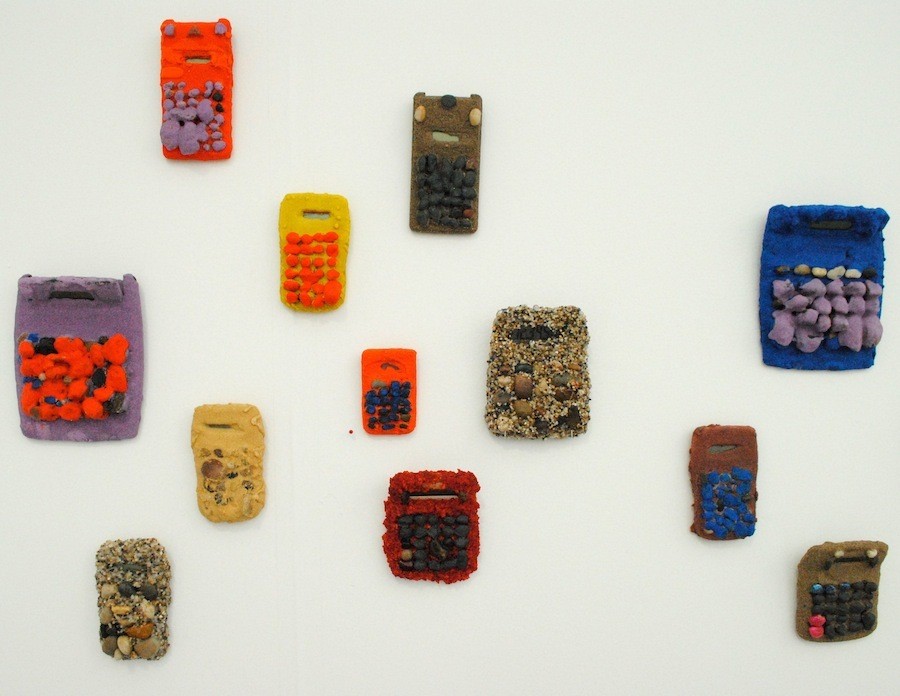 Belott's calculator creatures gathered crowds at both Untitled and NADA, turning defunct consumer goods into glowing fossils from the future. The mathematical aids, dipped in various hues of sand and rock, looked especially magnetic when juxtaposed with the many calculators adorning the dealers' desks. Our personal favorite was encrusted in Doritos crumbs. 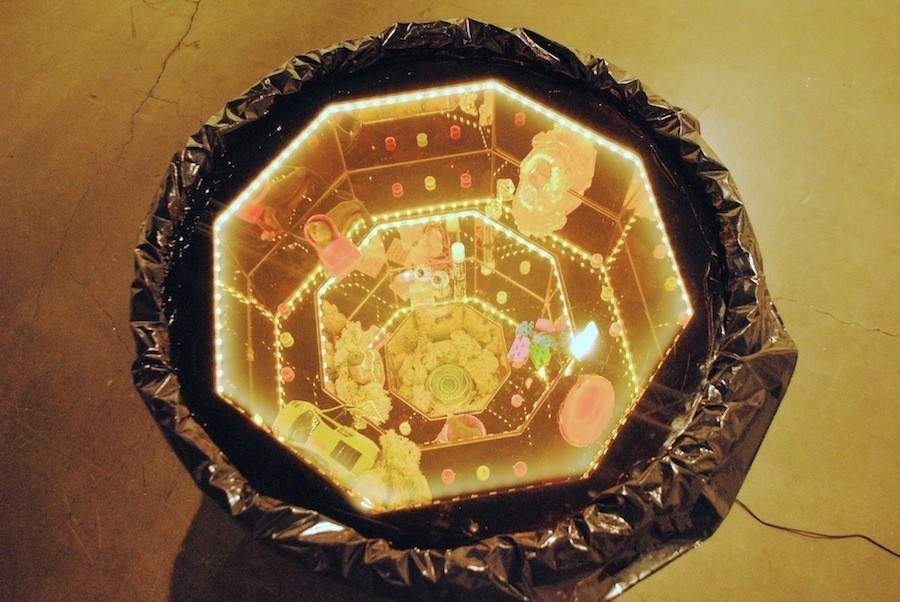 Kurian transforms garbage cans into kaleidoscopic portals, combining discarded junk and cultural gems in his neon-tinged mirrored wormholes. "I was thinking about the weird purgatory of overflowing trashcans," the Baltimore-born artist told GQ. "Like, they're receptacles, but they're also pedestals, and then they sort of became plates. I think with a lot of my pieces there's a lot of plating in a sense, like there's something culinary. With this one, it became a kind of fucked up banquet." 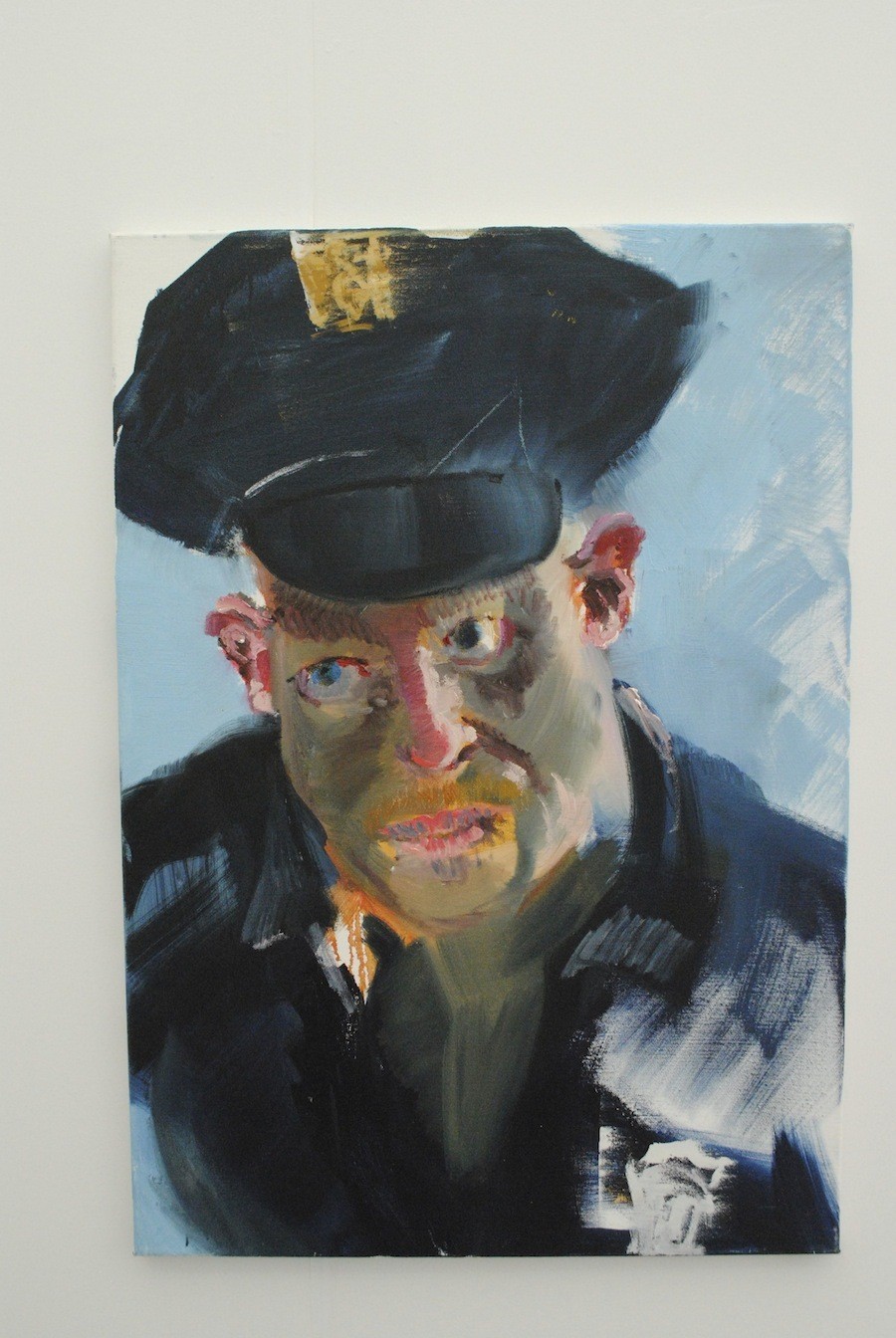 The famed German painter's striking portraits were all over Galerie Thomas Fuchs' booth at Untitled. This 2005 portrait of a New York cop in uniform combined mundane machismo with an otherworldly brutality that felt especially relevant given recent events. The roughly rendered portrait reveals the many impressions -- ruthlessness, vulnerability, fear, humanity -- that can simultaneously dwell in the human face. 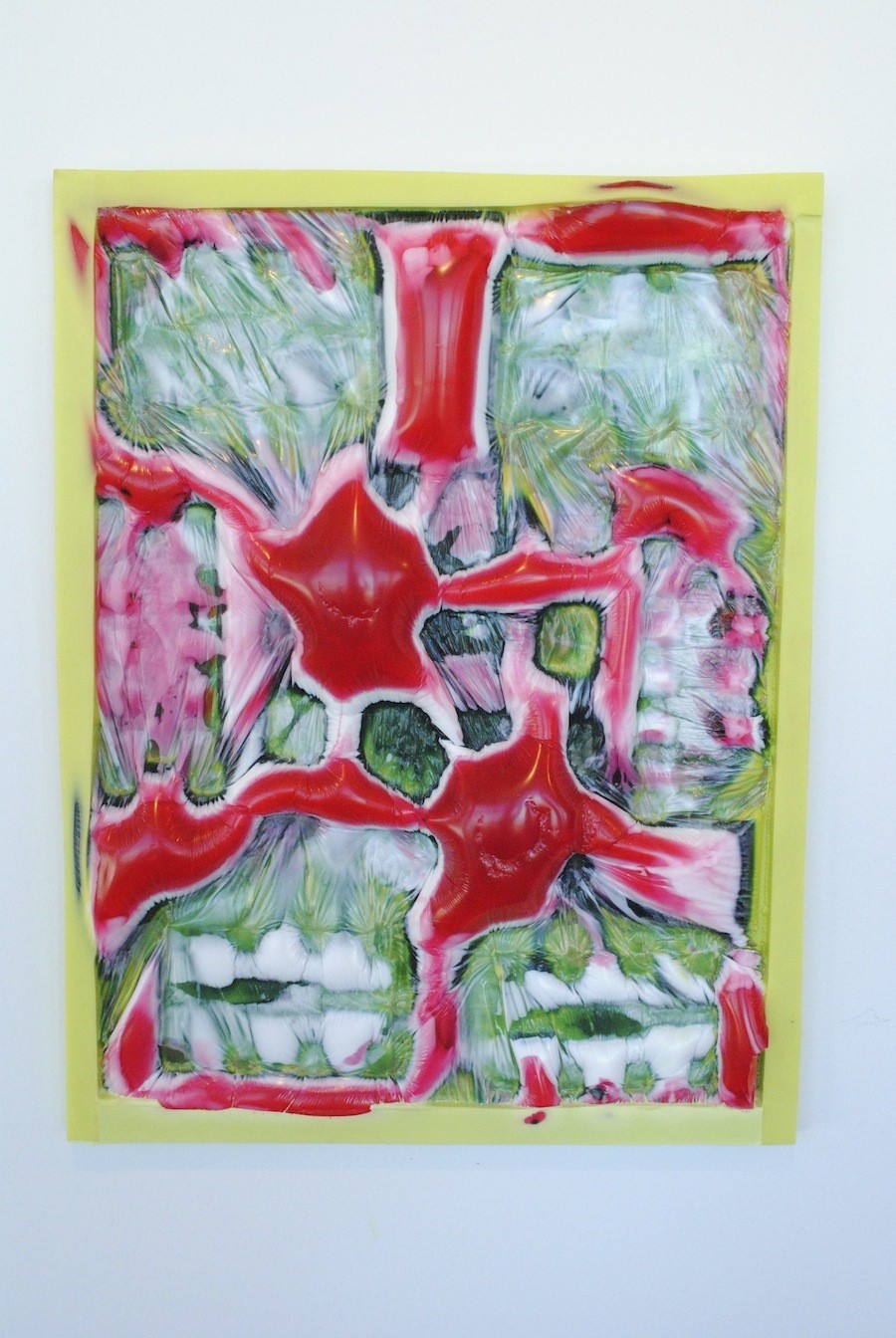 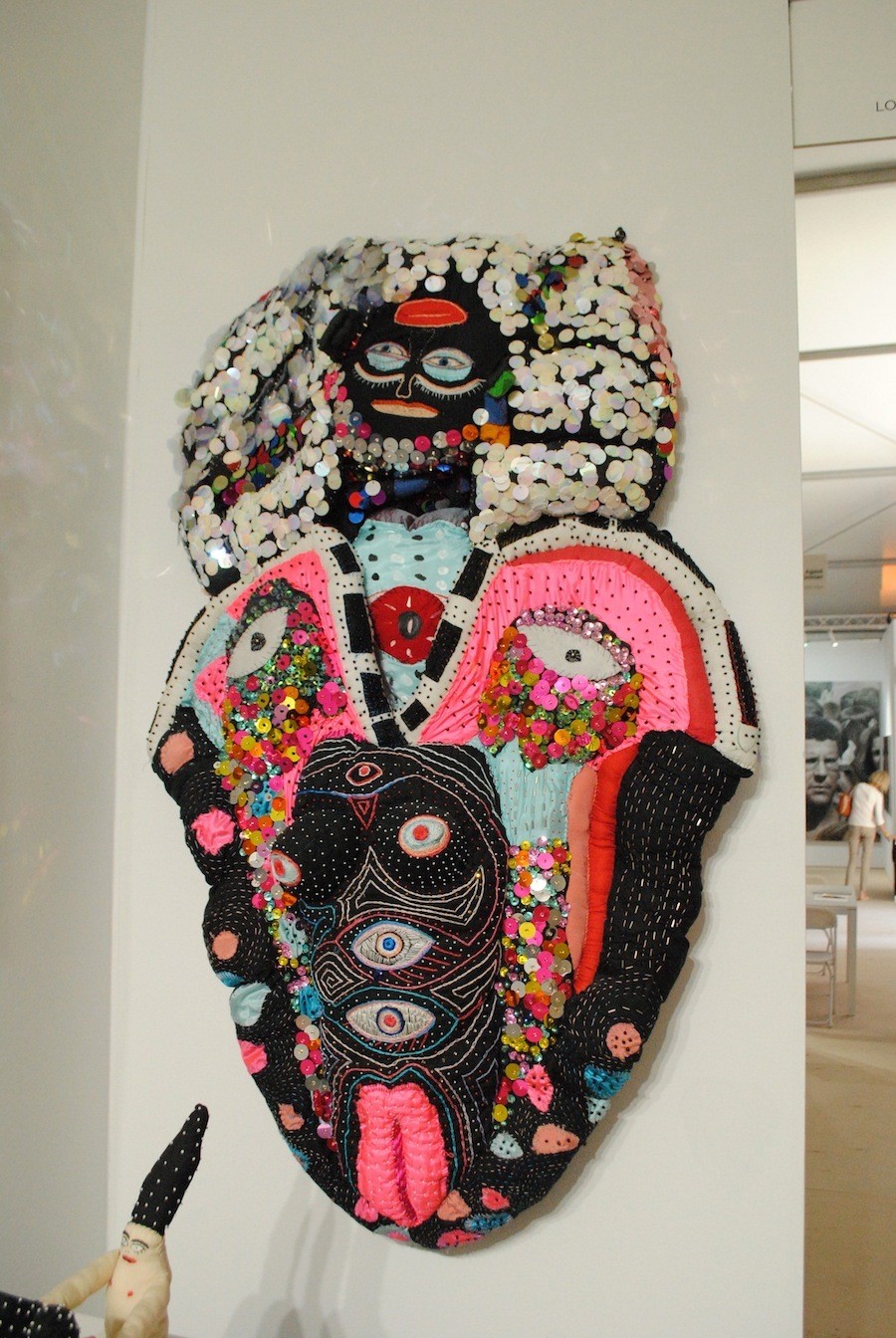 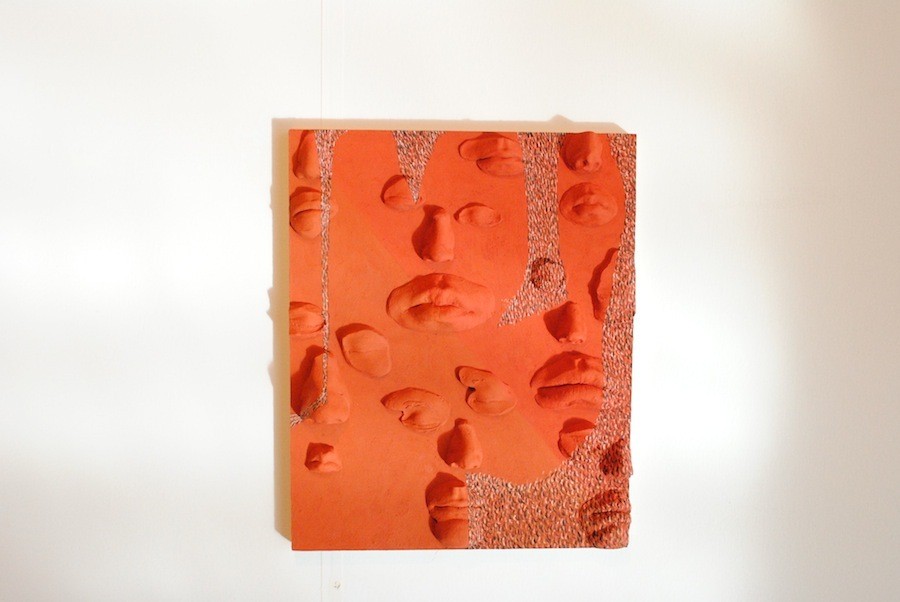 Kim, raised between Korea, Myanmar, and the United States, uses her friends' facial features as elements in her work, just as important as paint or canvas. The kaleidoscopic portraits resemble figures emerging from a colored pool or melting into a square of quicksand. The face parts quickly disintegrate from recognizable features into illegible scraps, like Picasso meets Mr. Potato Head. 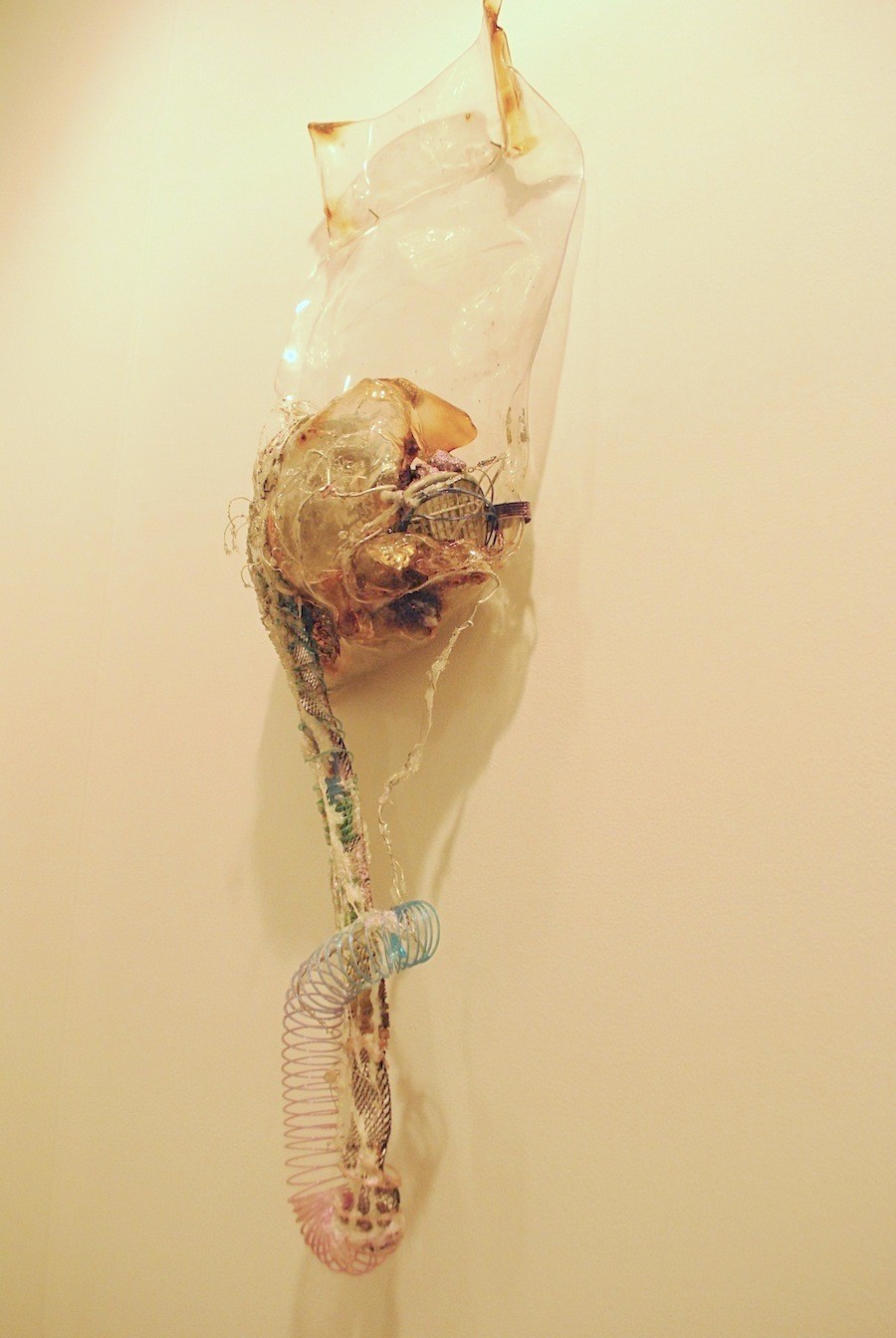 The Latvian artist crafts forms that defy categorization and understanding, appearing at once corporeal and plasticine, like the drooping innards of an alien or jellyfish. The works incorporate various cultural crumbs and residue, including a rainbow slinky and slot-machine ribbons, all encased in an ethereal and eerie clear acrylic gel.