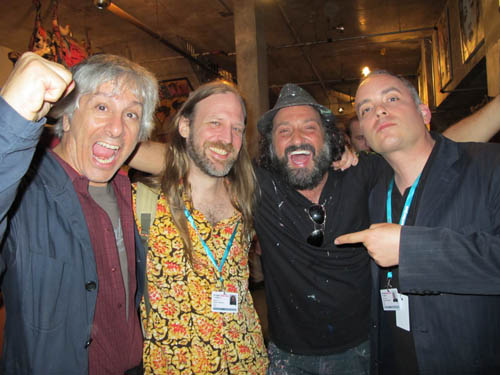 Dan Graham was sitting in first class as I boarded my flight to Art Basel Miami week. It was at this point that I realized this was not any ordinary week ahead. I found my seat next and settled in expecting there to be some kind of movie screen on the seat in front of me. On airplanes they have this catalog called "Sky Mall", it's a book that tells you how to buy useless items like a "Snuggie" and "Siamese Snuggie" fleece blanket designed for two. I also noticed the "Chanukah Xmas Tree Topper", a Star of David that fits on the top of a Christmas Tree and is apparently "a must for inter-faith marriages". Sky Mall is a great time kill, when you are at 37,000 ft. en-route to Art Basel Miami Beach with no movie on the plane.

My Miami editor Shana Beth Mason picked me up at the airport and we headed to her lavish apartment on the thirty second floor of a building overlooking the city. Joe Heaps Nelson was also on his way to Miami about to arrive later that day. Shana and I headed to Scope to run an errand while they were still setting up the fair, then into Art Miami for a peek at the installation of works there. After this we headed over to Primary Projects to prepare for the Whitehot Magazine Autumn reception.

The Whitehot party was great, really well attended and free vodka for everyone. Miru Kim's installation was being set up, it was an empty room at that point with dirt and hay. This room would eventually be the location of Miru naked surrounded by live pigs. A few days later we went back to Primary Projects and Kim was in the pen gently eating oats with the pigs. The Miami police department had gathered after several people witnessing the nudity associated with the piece had called the cops. Thankfully the cops were being ok, so we left shortly after this. After the party Lee Ranaldo contacted me, he was just arriving at midnight. Lee would perform at the new Frank Gehry performance space for the Art Basel 10th anniversary party the next day. The after party on the roof featured crocodile meat and also gave me a chance to hang out with Jazz-Minh Moore and Reggie Watts.

A series of other parties would happen during the week. Dasha Zhukova's beach party was fun mostly due to me arriving with Lee Ranaldo and Francesa Von Hapsburg who had just sailed across the Atlantic in her yacht. Photog Todd Eberle was there with painter Carlyle Stewart and Art Basel director Marc Speigler. It was rather cold on the beach and I saw Owen Wilson walk by us with his usual "aw shucks" face glowing in the Miami night. It was as if Wilson was covered in fairy dust, he had something glowing about him. Various other celebs were spotted around town like Mr. Brainwash, P Diddy, Damien Hirst and a host of others. I was excited to see Christian Slater at Art Basel and Jane Seymour at Pulse Art Fair.

Pulse was quite good this year and it was the first time I visited the Ice Palace venue since NADA left the building to relocate to the Deauville Beach Resort. NADA was also exceptional this year, the work on display was serious and not flashy, or geared towards sales as overtly as say the work in Art Miami. Claire Oliver was the best booth in Art Miami featuring an Andrew Erdos walk in booth installation and Andy Denzler's dramatic out of focus figurative works. Scope was also exceptional this year and the booth by Daria Brit Shapiro was nearly sold out by the time we got back to the fair.

Later in the week we attended the Mara Hoffman bikini launch at the Modrian hotel, which featured work by Spencer Tunick, whose work was integrated into the design of Hoffman's bikinis. The PS1 party featured a Kim Kardashian look alike contest - it was clear who the winner would be from the beginning. Ryan Trecartin was being honoured at this party and Trecartin and Klaus Biesenbach acted as part of the panel awarding the $1000 to the best fake Kardashian.

I was growing weary due to all the late nights and found a day to sleep in. Once my energy was back I got on the plane to New York. Sky Mall was not my only reading material this time, but I did see something about a computer mouse shaped like your favorite miniature car. I bought Malcolm Gladwell's Blink in the airport store. At first this book seemed like a lame follow up to The Tipping Point. The chapter I was reading on the plane was explaining how hockey players born in the months of January, February or March are most common in professional hockey.

We met lots of celebrities and saw a lot of art as usual at Basel this year. Everyone in Miami was well aware of Whitehot Magazine, which was quite exciting. Many told me they have been avid Whitehot readers for five years or more, or announced to me that I changed the history of art in London England, which was also shocking but a welcome comment from a stranger.

Attending Art Basel is a bit like reading "Sky Mall" with its gadgets and trinkets. Basel also gives armchair social media art lovers a chance to get some sun and some exercise and actually see the art they are talking about in person. Within the big blur of shows each year in Miami, something hits you that you never forget such as a Guston, Picasso, Pollock, Warhol or a work by a newer artist who may transcend gimmickry and become one of the new monoliths of contemporary art.

Now I'm back in New York preparing for a group show I am in at Launch F18 Gallery on Saturday December 10th in Tribeca.

See you around campus!