They say that art is the great international communicator no matter what language you speak. Art also is a symbol of free expression, and has represented the United States in its embassies and consulates around the world by putting our "best foot forward" in the spirit of creativity and cooperation among nations and showcasing some of America's most respected contemporary artists. On the night of November 30, 2012, some of the most recognizable names in the art world traveled to our nation's capital to celebrate the 50th anniversary of the U. S. Department of State's Art in Embassies program, which was held in the National Portrait Gallery at the Smithsonian American Art Museum. The gala was sponsored by the State Department and Secretary of State Hillary Clinton, who despite having a full plate of international diplomatic obligations and related crises, still found time to attend and appreciate the swirling dances with performers decked out in costumes conceived by Nick Cave, as well as the iconic art designs and collaborations produced by David Stark. Secretary of State Clinton spoke:

For over half a century, Art in Embassies has been working to place American art in our embassies and consulates around the world. And today, there are more than 10,000 works hanging or standing or being exhibited in some way, depending upon the medium, in more than 200 overseas missions. That obviously could not happen without an enormous amount of support. And in fact, over the last fifty years, more than 20,000 individual and institutional partners have contributed to this effort.

David Stark, Rhode Island School of Design whiz kid, sparked guests' imaginations with the integration of colorful artworks inspired by Art in Embassies' mission to promote the "intersection of people through visual arts." An homage to everyday artistic fundamentals and inspiration, the evening featured several art installations, including live musical and dance performances, along with mixed media presentations by the attending award winning artists. Designs by Stark featured a 20-foot tall pyramid created from 1.5 million Crayola crayons, which were donated by sponsors to art organizations for school children directly after the event, and a birthday "cake" formed from 300 cans of Benjamin Moore paint, measuring 16 feet in diameter and replete with giant candles.

The following artists were honorees: Jeff Koons, Cai Guo-Qiang, Kiki Smith, Shazia Sikander and Carrie Mae Weems. Jason Moran and Jenny Holzer did perform at the party but they were not honorees. Nancy Pelosi, House minority leader, and a host of congressmen graced the room, along with other diplomats, such as British Ambassador Sir Peter Westmacott with wife Lady Susan, Mexican Ambassador Arturo Sarukhan with wife Veronica Valencia-Sarukhan, and Congressman-elect John Delaney (D-Md.). Also in attendance were Art in Embassies contributors Beth Dozoretz, director, and Virginia Shore, chief curator, as well as MSNBC anchor Chris Matthews, host of NBC's Meet the Press David Gregory, and Howard Fineman, editorial director for the Huffington Post.

During the evening, the main event circled around the astounding collaboration that was showcased between Nick Cave and Washington's Duke Ellington School of the Arts Radical Elite Showband and the Kankouran West African Dance Company. This sight surely caught the attention of the approximately 500 guests, including Secretary Clinton, who observed the presentations from a private observation post while 10 Kankouran dancers performed in Mr. Cave's sound suits to the music of the Showband, which was comprised of nearly 50 instrumentalists ages 14 to 18.

The slideshow offers a peek into the exciting night that transpired in historic downtown Washington, where artists, designers, gallery curators, socialites, politicians, journalists, art lovers and embassy supporters all came together to celebrate the amazing achievement of placing great works of art in embassies throughout the world.

For more information on the Art in Embassies program, please visit: http://art.state.gov/ 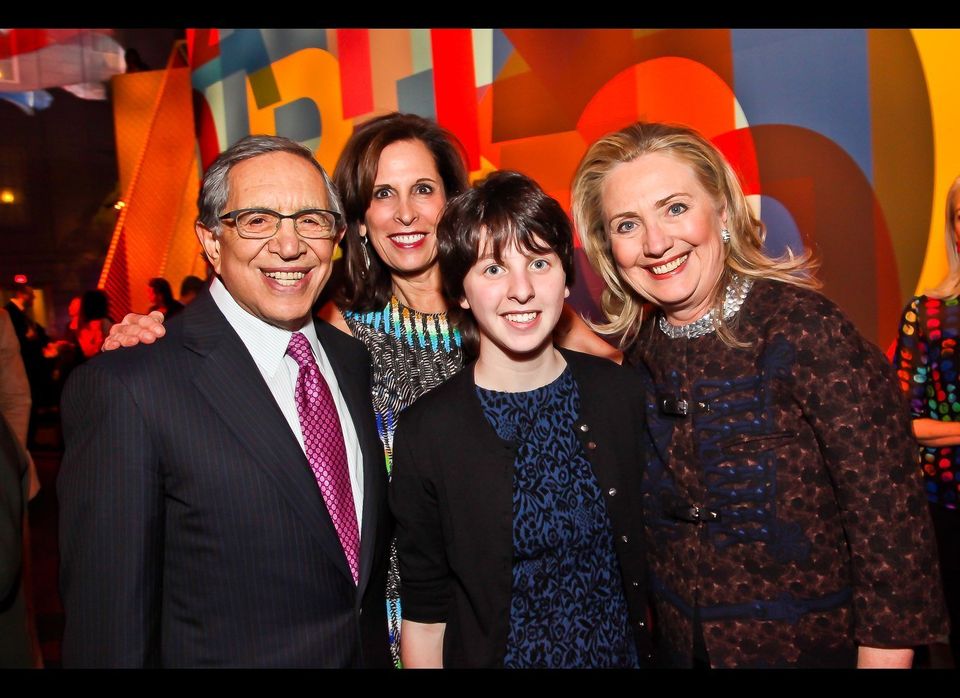