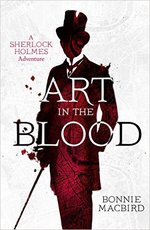 Bonnie MacBird 'found' Art in the Blood - A Sherlock Holmes Adventure, as a manuscript hidden in a forgotten tome of Victorian medical lore, and has brought us another adventure of Sir Arthur Conan Doyle's great consulting detective Sherlock Holmes, as narrated by his companion, Dr. John Watson. As MacBird quotes Nicholas Meyer, who also 'discovered' several Holmes manuscripts, "We can never get enough!"

I admit it. I am a Sherlock Holmes fan. I love the stories, the films - both old and new - even the television shows Sherlock and Elementary. Anything to do with Holmes, I like it. How could I not? My uncle read Holmes' adventures to me at bedtime. Our local police museum had a small exhibit on Holmes and A Study in Scarlet, because in his first outing, Sherlock communicates with the police in Cleveland, Ohio. When I was a teenager let loose in London, one of the first places I visited was 221B Baker Street, which is where the Sherlock Holmes Museum can be found.

Yes, Sherlock Holmes is the best. My only problem was that there wasn't more of him or what there was, didn't meet my exacting standards.

In Art in the Blood, a fast-paced, page-turner, MacBird has captured the tone and style of Sir Arthur Conan Doyle's immortal sleuth perfectly. This book has everything - a missing child, rival detectives, stolen art and, of course, murders.

Set in 1888, in the wake of the "Jack the Ripper" murders, the publication of A Study in Scarlet in 1887, and after Watson's marriage to Mary Morstan, Holmes receives a coded message doused in perfume asking for his assistance in consulting. As he and Watson depart for Paris to meet with Emmeline La Victoire in order to find her son, Emil, their mission intersects with a request from Holmes' brother Mycroft to stop the illegal importation of the Marseilles Nike into a private art collection.

In short, all roads lead to the Earl of Pellingham, Emil's father through a tryst with Emmeline, and the owner of a fabulous art collection. Mycroft knows that Earl is an art thief, but his reputation as a collector and humanitarian, and his extreme wealth have made him above the law and able to pilfer the world's greatest treasures to hide away in his own collection. Since Emil lives with him, and is now missing, Holmes and Watson suspect he is responsible for that as well.

This is only the beginning of a case that has Holmes and Watson pursuing twists and unexpected turns, leading to a nefarious secret that makes all the other crimes committed pale in comparison. The labyrinthine plotting is logical and exciting with plenty of clues to follow as MacBird brings about the inexorable conclusion. What is intriguing is that this is an early Holmes. He is thirty-five, almost at the start of his career, and not quite perfect. He is complex, observant, and still plagued by his personal demons. Despite his chilly exterior, Holmes' deep-seated emotions occasionally come to the surface, especially while dealing with the case of the missing child. Watson, while maintaining his secondary position in the dyad, nevertheless is more assertive and perceptive than he is narrating the original tales. Their relationship resembles the more modern interpretations as depicted in Sherlock and the newer film characterizations.

The other characters in Art in the Blood are also well-defined. Through dialog and description, MacBird engages the reader in understanding the peripheral characters. Strothers, an American and father to the Earl's wife, the Earl himself, Emmeline La Victoire, and Vidocq, the rival detective, are all carefully developed and their dialog reflects their origins and socioeconomic status. MacBird's sense of scenery also brings the late Victorian era to life. The descriptions have a cinematic quality, which is not surprising since she was the screenwriter for the original Tron, and has won three Emmy awards for documentary writing/producing, eleven Cine Golden Eagles for scripted and documentary work, and many other credits. Her ability to evoke a scene in a few short descriptive phrases, even within a Victorian narration, moves the story along and keeps the action front and center.

I have always held that life with Holmes is a bit like walking across a suspension bridge that hangs from ropes over a jungle chasm. The adrenaline may be invigorating, but one never knows what lies beneath and one is constantly in danger of losing one's footing." - Dr. John Watson, Art in the Blood

Watson's assessment of this turbulent life is reflected throughout the story until the exciting and satisfactory dénouement. Throughout the book, the stolid doctor follows the lead of his more volatile and brilliant friend, through both his deductions as well as some very serious errors. It was most interesting to observe the rivalry between detectives as both seek the child and the statue, with the ever-hyper Holmes vying with the self-assured and duplicitous Vidocq for the attention of the client, Emmeline. I have to say, it was more than satisfying to read how Watson felled Vidocq with a roundhouse punch upon being introduced. Vidocq had earlier shoved him down the stairs at the Louvre in his pursuit of Holmes. It is touches like this that both humanizes Watson and endears this book even more.

As the novel races towards its inevitable conclusion, you will wish it was longer, and you will be hopeful for a sequel soon. Art in the Blood is an excellent adventure for both Holmes fans and anyone who enjoys a rousing, good story.

If you can, try to connect up and see her. Maybe she'll let slip if she found any other manuscripts!