The hydrangeas still bloomed when Mario Alberico opened his back door in November 2013 and took what he thought could very well be his last walk outside. He was facing a fifth emergency surgery in three years, and extensive necrosis in his bones left very little hope that doctors could save his left hip.

With each step, Mario imprinted in his memory the sensations of walking and feeling the ground under his feet. Once inside the house again, he called his wife, Claudia, into the family room and asked her to dance with him. "I wanted to experience these things one more time," he recalls. "How many people get that gift?"

To Mario, it's all a gift--or as he says "strange blessings"--from surviving Ewing's sarcoma as an 18-year-old, but becoming disabled some 30 years later due to severe damage caused by radiation and experimental cancer treatment, to not losing his left hip in that 2013 surgery. Add to his gratitude list his deep faith; the love and support of his wife, their three children, and extended family; having had a successful business career capped by becoming a partner at Accenture from which he retired due to disability in 2009; and being an artist--always an artist.

"It doesn't have to be either/or--it's both/and," Mario says of his life as an artist that was once integrated into a fast-paced business career and now is balanced with his precarious health. (As of this writing, he is about to undergo another hip operation.)

As a role model, Mario powerfully demonstrates "both/and" for all of us who struggle with balance and sometimes with permission to pursue art while dealing with the reality of a day job and family obligations. Instead of choosing the tyranny of "either/or," embracing "both/and" prioritizes purpose and passion. It is not one over the other; rather it is one in, through, around, between, within, and because of the other.

For 50 years, from the time he drew faces on his pillowcase as a five-year-old--the seventh of nine children of Emelia and Julius Alberico on Chicago's South Side--Mario knew he was an artist. In junior high and high school, beloved teachers inspired him to see that art was a way of looking at and experiencing the world.

Artistic expression became conjoined with spiritual exploration when Mario was 17 and an unexplained pain his back led to a dire diagnosis--leukemic infection of the bone. Facing his mortality at such a young age, Mario sought answers--not "why me," but "what now."

"I went out on my front lawn of my house to talk to God," Mario recalls. "I said, 'I know I am supposed to die from this, but I believe I'm not.'" When Mario asked what he should do with his life after cancer, he "heard": "Glorify Me in the world through your work."

And so Mario's journey was shaped, spanning his signature series of crosses and trees, including his Stations of the Cross installation entitled "Just an Old-Fashioned Lynching" that combines abstract sketches of the crucifixion with the struggle for human rights. (see his Gallery 119 ) New digital works express riotous natural beauty that is often brief and never sentimental. His art has been featured in gallery shows in New York and in Chicago, most recently the juried exhibition this month for the Rehabilitation Institute of Chicago's 13th Annual "Art in Motion" (Mario was a finalist).

A favorite work is the transformative blossoming of a magnolia tree against a vivid spring sky captured digitally as Mario recuperated from yet another surgery and explored new media because he could no longer stand for hours at his easel to work in oils. Rather than mourn, Mario embraced this new definition of both/and to meld what he calls "material and immaterial media"--oils, collage, assemblage, mixed media, drawing, paper, canvas, and two dozen digital tools.

Expansion of his artistic repertoire, while necessitated by his health, is another one of those strange blessings that Mario defines as "the paradox of creation through suffering." Here is resilience defined. "It doesn't eliminate the challenges or the work and time involved," Mario says. "But it makes it a life of fulfillment and abundance." 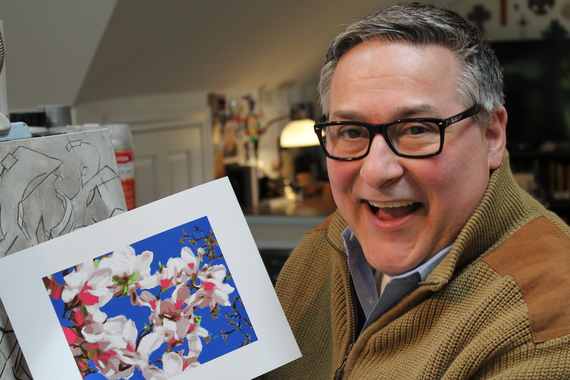