Someone once said to Salvador Dali "You've gone too far." Dali replied, "But that's the only place I have ever wanted to go." This is something the controversial and often misunderstood artist Steven Johnson Leyba, lives by. Leyba is no stranger to pushing limits artistically; at times he and his art make some people uncomfortable and others enthralled.

In 1997, Leyba was asked to perform at Jack Davis' birthday party. Davis was a political consultant at this time in San Francisco, responsible for getting two consecutive city mayors elected. Davis was then hired by the 49ers to assist them in getting votes for legislation, granting them a new 49ers stadium. Leyba decided to showcase "The Apache Whisky Rite," at this event, which used ritual to illustrate how alcohol was used to oppress and control Native Americans in this country. This ritual consisted of a pentagram being carved into Leyba's back, Leyba being urinated on, as well as drinking urine and blood. Leyba then began to place curses on politicians, the mayor and even the 49ers. Leyba believes the 49ers' recent Superbowl loss is proof that the curse still stands.

Leyba has native American roots and he was also the last ordained Satanic priest by Anton LeVay; ritual is a large component of his art. As Leyba explained: "I had a captive political audience that I could communicate with and show my distaste for our government. More funding goes to sports than art in schools, because it is considered more important for kids."

When I found out that Leyba would be performing in San Francisco in early May, I made sure to be there. Leyba's newest piece of performance art is called Project #9. Leyba collaborated with Marly Preston, a talented composer who performs all of the music for this artistic endeavor. I attended a private dinner with Leyba and Preston, two days prior to them performing the show, where we discussed, art, politics and Project #9.

During dinner there was a table displaying all of Leyba's books, as well as a coloring book for adults, that Leyba created. Leyba is a writer, painter, as well as performance artist. Leyba doesn't just use paint for his PAINtings, as he refers to them; he uses his own blood, urine, semen and excrement on most of his art. To Leyba, using those fluids is a vital form of expression. 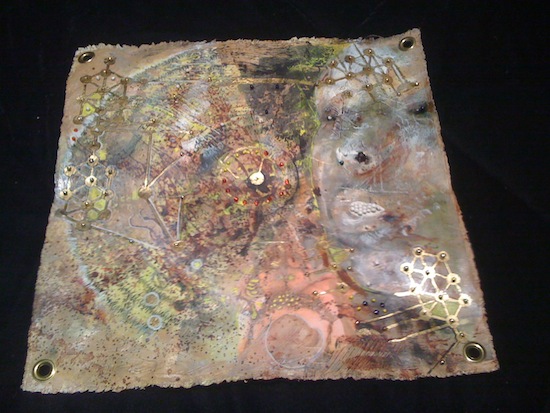 "To me, giving blood is more real than praying, "...here is what I give to the Universe and here's what I want." I put blood on it, because it fattens the collage of the image, it pushes back the realism and my technique in painting is lost and found, it's layered," says Leyba

I was able to view a variety of these PAINtings, that would also be on display during the Project #9 performance. Leyba's art is vibrant and alive. He uses color, texture, fabric as well as other adornments to compliment his art. From the portraits he paints of people, which he calls "Sex Goblins," to the Monsanto book (a book of canvases in which Leyba addresses genetically created food, questioning Monsanto and it's tactics surrounding modifying the food we eat in this country, without informing us of what we are really consuming) every person at this dinner was captivated. Each piece has so much detail, you continue to go back to it -- you do not want to miss any part of the creation. 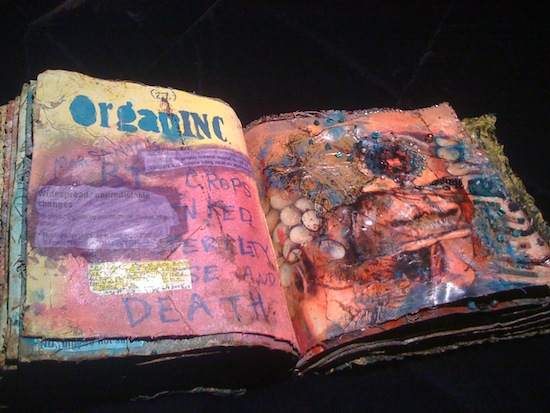 Preston and Leyba met on My Space of all places: "We weren't sure if our collaboration would work at first, because we are so different, but after talking, we realized we agreed on a lot of the same core issues, which was surprising. Our intent was to force people to decide what they believe, what they think about these issues. We wanted to go against the whole script, because everything is binary and black and white. We want to force people to really think about their politics and decide what they stand for," says Preston

Project #9 causes people to analyze what they believe, in terms of politics and the problems we are facing in the world: "Why should the world government and corporations decide everything? It's the age of transnational corporations. I want to communicate to the world, and I want people to engage. I find most artists especially in the U.S., are very conservative, so they don't choose topics like sexuality and politics. I want people to embrace everything and not be afraid to have real discussions." says Leyba 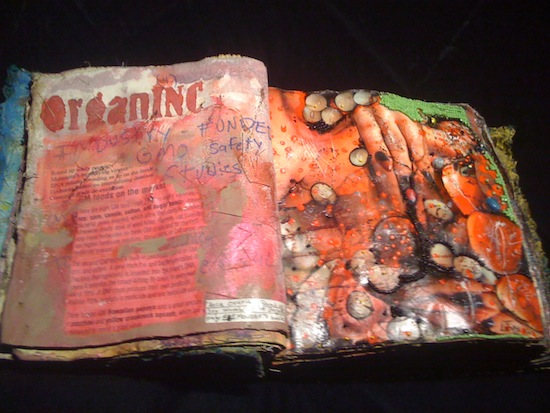 It is Preston and Leyba's contention, that most people seem content to be complacent, to allow government and media to define their politics, without thinking for themselves. If Project #9 sounds angry to you, it's because it's meant to be. Leyba and Preston are evaluating all the problems that most people don't think about everyday. "I believe that Malcom X said it best, "Those who make peaceful revolution impossible make violent revolution inevitable, and I think that is what Project #9 is about," says Preston.

Project #9 was hosted at the Center for Sex & Culture earlier this month. Leyba opened the show with scathing remarks toward San Francisco, in regards to its flakiness and lack of culture. Using ritual to continue the show, he presided over the Coyotal High Priestess ceremony. He chose Daurian Faust as his subject on this night. Faust is a well known Bay Area Burlesque dancer and training to wrestle professionally. This ritual was performed through music, dance, as well as the adornment of Faust's body, with a specific pattern signifying the rites meaning.

Afterwards, the music began as Leyba and Preston took the stage. Preston clearly has a classical music background -- the stylings are present in the composition of Project #9. Along with the music was Leyba's spoken word, there was a large screen behind him, featuring film footage and graphics that were chosen to accompany each track. Project #9 is a critical thinking piece, discussing important issues like water scarcity and the politics of everyday issues. The music is beautiful and the message is powerful. While some people may be critical of how Leyba and Preston communicate to the world, at the end of the day Marley and Preston don't long to be popular, as much as they want to be heard.

Leyba and Preston took this show on the road, traveling to Portland, San Franciso and finally, Los Angeles to perform Project #9. If you would like to know more about Project #9 click here. If you are interested in Leyba's PAINtings, they are still on display at the Hyena gallery in Los Angeles.