I sometimes refer to myself as the bloopers explorer, because my blooper reel is always longer than my actual footage. Two years ago, on my first morning in the Serengeti bush, I was awakened by a lot of rustling and grunts. Upon realizing it was wild activity that needed to be documented on my Canon 1DX, I ran out in a rush, still in my pajamas, to capture life in the now. It was near 5:30 a.m., and I wasn't caffeinated. I simply picked up my equipment and bolted out with the enthusiasm of a toddler chasing an ice cream truck. I turned the corner around the bushes in haste only to stop four feet short of a tall and regal adult giraffe. As I gathered my wits to photograph him in all his glory, I couldn't help but think to myself, "Gosh, this is like Walking With Dinosaurs meets Out of Africa." 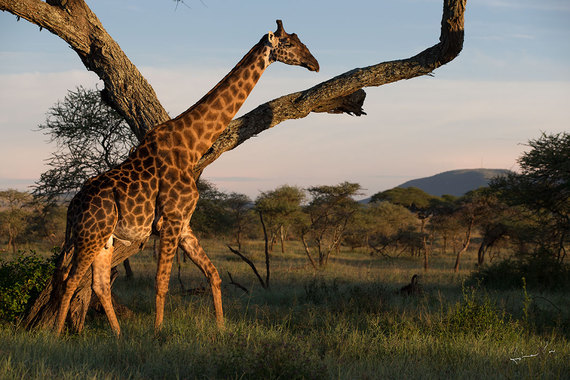 Cautious giant by Asher Jay, He walks to connect the heavens to the ground I fumble on.

When I lifted the camera to my eye, all I could see was black. I had taken the lens cap off already, so it wasn't that this time. Then it dawned on me: I had on a telephoto 100-400 millimeter lens, and it was pitch dark because I was peering into his flared nostrils. I yelped and reprimanded myself for not planning for the morning shots better. But I was determined to make the most of this gear fail.

The only thing I could do at this juncture was to step backward, one baby step at a time, without startling the subject. I had to manually override the snafu. As I started stepping back, left, pause, right, pause, left, pause, right, pause, left ...and during the entire length of this stealth backwards amble I was utterly focused on the giraffe in front me through my viewfinder. It wasn't until the placement of my right foot landed me in a warm, plush and unfamiliar space that I began to question my peripheral vision. I felt my head sink into something. I quickly realized that I had walked into the crotch of another giraffe. I look up. Lo and behold, it was a well endowed male giraffe. He wasn't too happy about this encounter. He had been munching away trouble free, off an acacia tree, until this bizarre incident transpired. Startled by the intimate nature of our first meeting, he tensed his legs up. This only got my head further stuck between his hindquarters. I stood there thinking, 'Heck, of all the ways to die as a new National Geographic explorer, this was probably the dumbest. Seriously. Walking into the butt of a giraffe and getting kicked in the face for it? Believe we've hit a new low Holmes.'

In the meantime, this tall drink of water had begun processing his next move, after all his personal space and freedom were both at stake. He unexpectedly unclenched his nether regions, which returned the blood to my brain, then he stepped over me, walked a few feet forward, spun around, and gave me the most judgmental look any giraffe has ever shot a human. The rest of the morning he kept two very wary eyes on me while pretending to eat leaves.

Lesson Learned: Never back up into a giraffe's rear end. It isn't safe. I did not prevail because of survival guide training; it was dumb luck. I am grateful to that poor, perplexed giraffe who simply did not have the psychological bandwidth to process my brand of stupid that early in the day, because he could have done a whole lot worse to me.

The reason I narrate this story is because as a storyteller if you aren't careful, you can be cast in stories you don't plan for. But I also say it to underscore this truth: it takes going into a giraffe crotch every now and then to uncover a story worth telling. Had I not invaded his personal space and had I not left the wrong lens on my 1DX body that day, I would have never acquired these images. 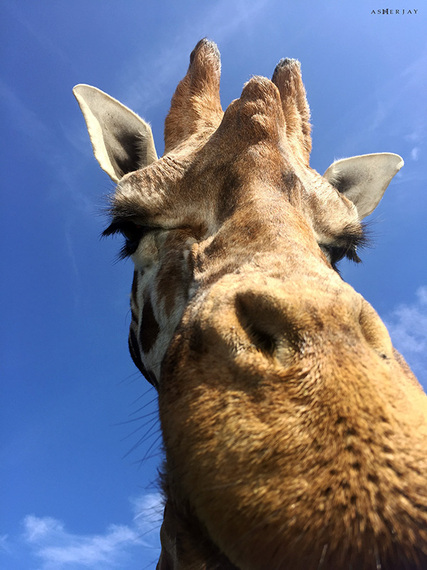 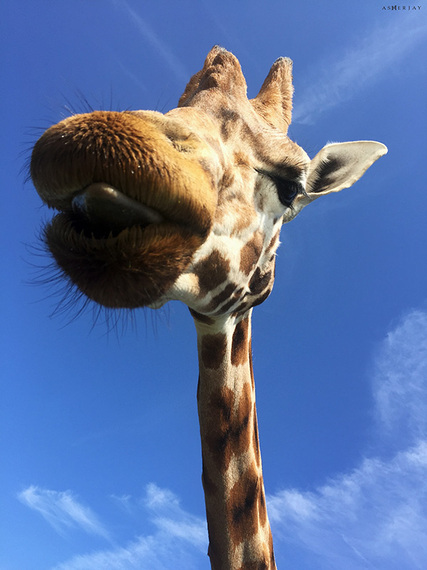 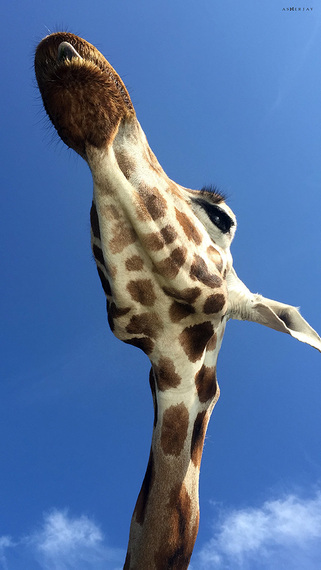 A story is like a main course, it is meant for consumption, it aims to satiate and like every entree it should have a recipe with the right proportion of specifically curated ingredients, mixed together in a sequence that best expresses an authentic and lasting sensory experience. Each of the spices in it need to find expression individually and cumulatively, and it should not be overworked such that the textures fail to come alive. The key is to balance the composition while ensuring the piece's true character and essence don't get obfuscated. So I began analyzing how I rationally stitch a visual or written narrative together, and how I make it fun, entertaining, emotionally evocative or compelling, and I came up with a queue of motions I go through to get to the desired end result:

Keep your story simple, the more complex your narrative arc becomes the less effortless it is to lure your audience into the reality you are building. A story is about sensory immersion, for which it needs to be articulated in an accessible vocabulary and relate content that is meaningful to the receiving parties.

People always tell you to write what you know, because that is the only way you can retain integrity, and authenticity. Humans are social creatures, and they can detect when something feels false or incongruous. It's why the little hairs on the back of our neck prick up in the company of a sociopath or psychopath, they do not smile with their eyes and whole face just with their lips. Do not tell a story whose smile stops at it's mouth, people will know you are full of $#!^ and a farce.

To generate a story that is engaging, is to transport your rapt audience into the very cockles of the reality you are creating. You need to seduce your audience into the world you have fabricated and make the imaginary realm or alternate moment of space and time more real to their senses than the one they are physically occupying. To make your anecdote interactive is to involve your audience, and appeal to them to be your collaborators, to give feedback, participate in real time and take ownership of the sharing exercise. This can happen either the old school way, through theater, art collectives and pantomime or the new age way, through social media and virtual reality. In order to make what you are selling believable the story needs to become an extension of the receiver's identity, which will persuade them to internalize it. This will ensure that they will recall it forever, making the entire journey or process memorable. 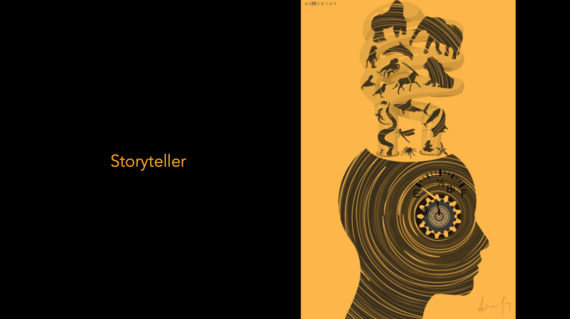 For any of this to happen, the story must contain the following five ingredients -- an easily discernible protagonist, a clear and bold vision, a distinct and intelligible message, a cohesive and comprehensible chronological sequence of events and it must leave a mark. The protagonist can be a product, a person or even an idea, and the mark is more likely to stand the test of time if it is of an emotional nature. Whether the mark and message registers in the hearts and minds of the audience is invariably determined by the medium and method of its delivery. All of these ingredients is what a story needs to envelope a mind, heart and soul in the make believe, in the magical, in the fantastical and extraordinary. This is what it takes to move someone on a physical and emotional level.

The next and final part of this series will delve into how stories affect people, and why stories change us.