Every once in a while events in the art world and events in the "real" world mesh in a particularly fortuitous way. This is the case of the conjunction of Living as Form -- an art exhibit taking place in the abandoned space of the old Essex Market on the Lower East Side, sponsored by Creative Time -- with the Occupy Wall Street movement now taking place further South and West in Lower Manhattan.

The simultaneity of these two events was not planned, but Creative Time curator Nato Thompson is as inspired by "The Occupation of Wall Street Across Time and Space." as will be any viewer of Living as Form who is also taking an active part or interest in Occupy Wall Street.

The exhibition offers a combination of visual experience one might encounter in a college student union, a dorm, a BFA student show, and a Whitney Biennial. If you are looking for visual pleasure to offer itself up to you at first or second glance in most cases you will be disappointed. This show is part of a twenty-year direction of contemporary art away from traditional media and object-based art works towards installation, social platforms, participatory social engagement and collaboratives. Creative Time curator Nato Thompson has made it pretty clear that he is more interested in social engagement even than in "participatory art": that is, if given a choice between art and social engagement, he'll go with social engagement.

As a painter with a strong interest in political activism, I think painting and other traditional art objects can provide experience that is more than just a passive relation to commodity: a private engagement with an art work even if it not a political art work can also transmit courage and a renewed sense of the value of interiority that too has political meaning. Nevertheless I enjoyed Living as Form on the terms set by a variety of types of work included in the show. Living as Form presents the work of over 100 artists, art collaboratives, curatorial, and educational projects, I will just focus here on a few works that relate in their content and form to what Occupy Wall Street is as a popular uprising and as it has accrued some types of images and form to it. 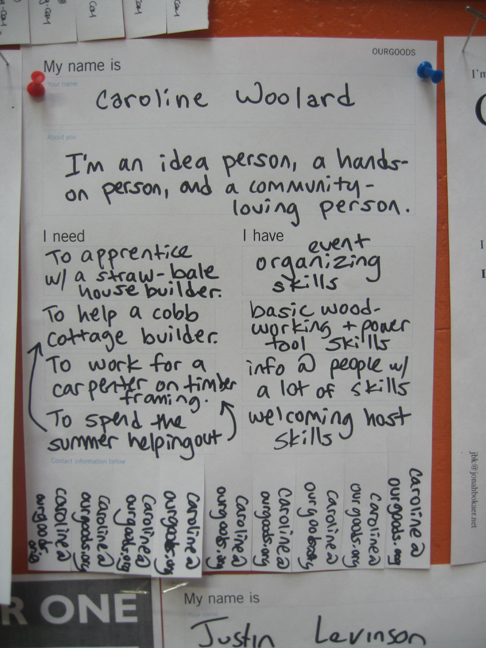 One display in the show is organized by Our Goods.org, "a barter network for the creative community." The walls of one booth are covered with a series of personal ads of the type you see on public bulletin boards. Here artists list their needs and the services they can offer in return, in a positivistic variant on one of the most haunting types of image circulating on the web in recent weeks via Occupy Wall Street: photos online at "We Are the 99%" of people holding up handwritten signs and notes to their computer's camera, testifying to the impact of their lives of student debt, recent foreclosure, unemployment. 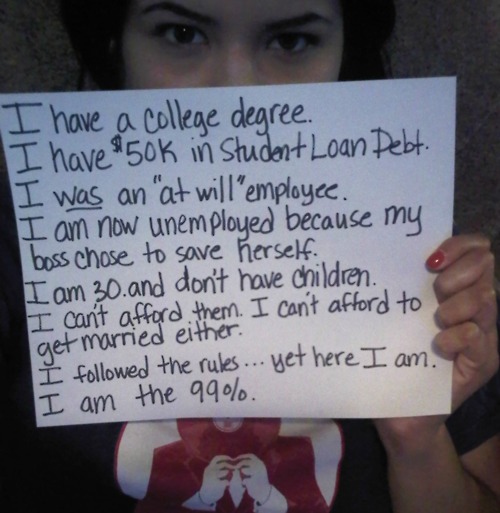 Perhaps these images are the art of our time more than art seen in mainstream galleries, maybe even more than much socially engaged art -in the sense of an image typology that will speak to history. On the other hand the barter or exchange economy that is encouraged by Our Goods is part of the Millennial generation's vision of social change, less reliant on traditional economic or governmental structures, like Occupy Wall Street a de-centered society of self-government and fair exchange of services facilitated by social media. 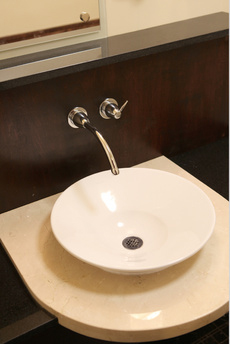 Another very different kind of socially engaged artistic intervention into lived urban space that has garnered a lot of media attention is Superflex's copy of the executives' restroom in the New York JPMorgan Chase headquarters installed inside the Olympic Restaurant in the same building as the exhibition with its entrance on 115 Delancey Street. It's got a black marble floor and elegantly designed sink bowl and faucet--I was expecting some more gold-plated appointments--what's great is that this a permanent improvement to the modest local diner. 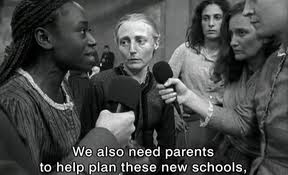 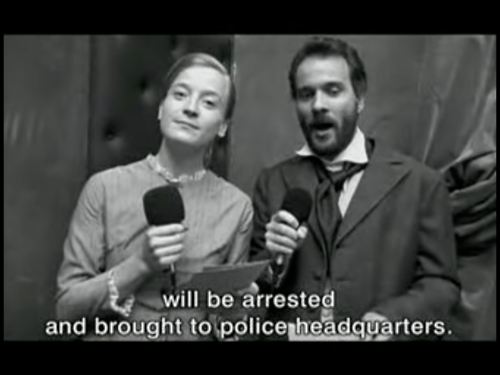 Of the many other works of interest in the show, Peter Watkins' five hour movie La Commune (1999) really stands out as totally timely for the popular occupations of public spaces around the world in the hopes of political change. It is a black and white movie detailing the events of the populist insurrection of the Paris in the spring of 1871. The film presents this historical event using the format of live television news coverage, or as if this was a black and white documentary actually filmed during the Commune. It is so successful in this form that I caught myself beginning to write about it as if it were a real record, rather than a recreation inflected with contemporary political tropes: in the short section I watched at Living As Form, young working class demonstrators respond to the news interviewer shoving a mike in their face by saying how thrilled they are, how they hope things are going to finally change for them, then the interviewers turn to a crowd of bourgeois Parisians come to see the demonstration. "They have no plan," sniffs one guy, "they're outside agitators," says another! Sound familiar? Of course the script is written from the point of view of present day political scripts, but it is quite plausible that this would have been true then. From what I could tell from short viewing and some research this film is a great work of art that I hope to see in full. It would be great if there were a revival showing now during the Occupy Wall Street autumn. Meanwhile you can see it at Living as Form.