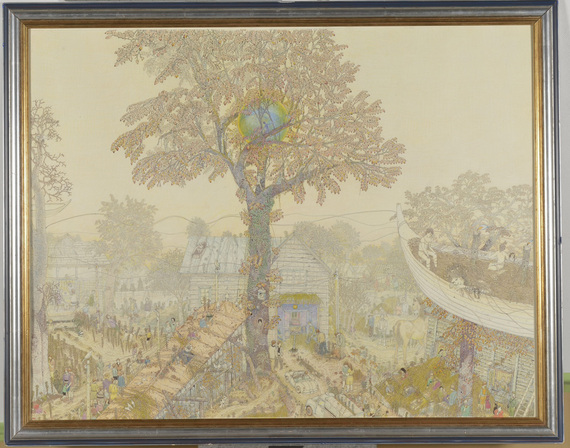 It has been said many times before that a basic secret of success for an artist is recognizable natural talent coupled with burning ambition and concentrated hard work. But looking back on contemporary art history, the jumping off point for most thriving artists is receiving professional acknowledgment early on in their efforts, which can lead to many obvious benefits, including gallery representation, and interest in their work from critics and the museum community. The question is, how to get the right type of specialized, affordable international exposure within a reasonable amount of time while building an arts career. There are numerous routes an artist may take to increase his or her chances of achievement, and among those is the laborious process of contacting galleries and museums, which unfortunately sometimes have their own agenda, making the odds of being given a show discouraging. On the other hand, another viable option for young and emerging artists is participation in a prestigious juried competition that receives global awareness, one of the few choices where there can be both substantial cash prizes and valuable exposure for the winners. 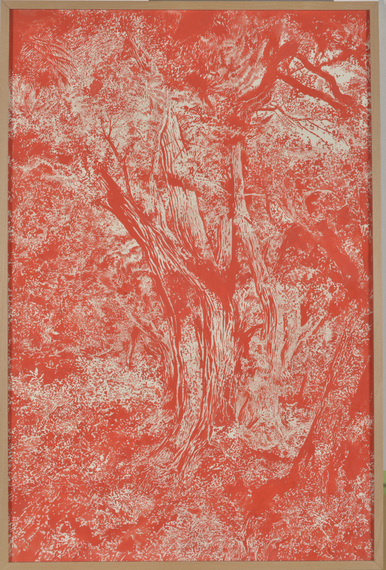 This kind of accomplishment-oriented attention often is an immediate game changer for an artist's reputation. These creative contests are usually artistic and literary, rather than sports or scholarship related challenges. Generally, juried competitions are when individuals actively enter to vie for prizes, rather than circumstances where others nominate worthy individuals, such as the Academy Awards or the coveted Turner Prize in painting. The Guggenheim Fellowship is a good example of an award that straddles the line between a scholarship contest and a juried art competition. 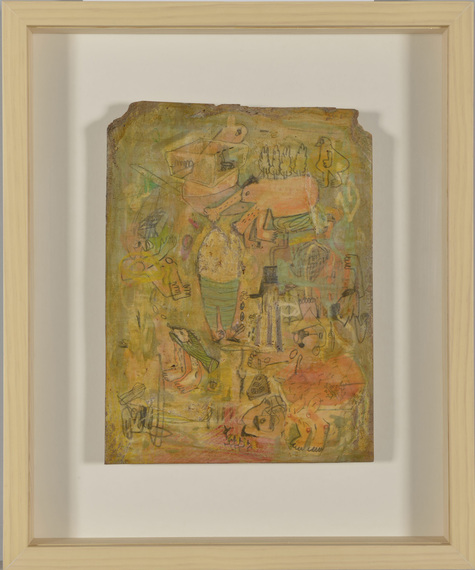 The history of juried competitions can be traced all the way back to Greece, under Aeschylus and his successors, who delighted in exploring both public theatrical and artists' contests, using these as competitive forums to discover fresh talent. More recently, but before the advent of the internet, national and international juried competitions were advertised in trade publications, with jurists selected from among the artistic or literary elite and visual works accepted primarily from submissions of photographic slides, which made it much easier than sending in a bulky portfolio of original art. Now this complicated process has entered a new age of simplicity and precision. 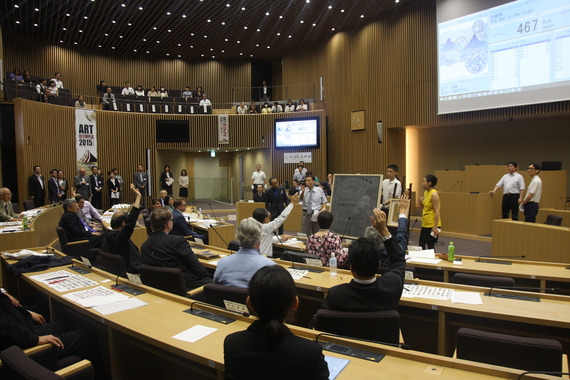 Art Olympia is an annual international competition held in Tokyo, Japan, which is supported by the Tokyo Metropolitan Government and follows the great tradition of determining and supporting various talented artists from around the world. For last year's event, nearly 3,000 artists from fifty-two different countries participated and approximately 4,000 works eventually were presented. 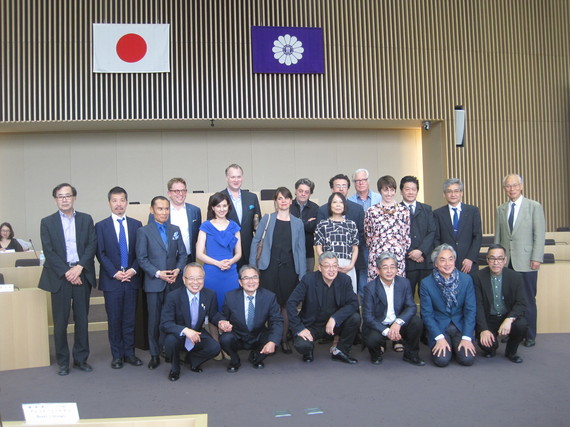 Juried Art Services, the respected art competition coordinators, has collaborated effectively with other international competitions, but Art Olympia certainly is the most successful ever. Juried Art Services (known as JAS) works with many major institutions, including the Smithsonian in Washington, D.C., as well as the American Craft Council and Harvard University, among others. As the Art Olympia competition has the largest global reach, along with its prestigious panel of judges and a remarkable sum of prize money, it needed to have an expedient method by which to screen thousands of artist applicants professionally and efficiently, and JAS has devised a foolproof system of review that would be essential for such an ambitious and logistically complicated program. 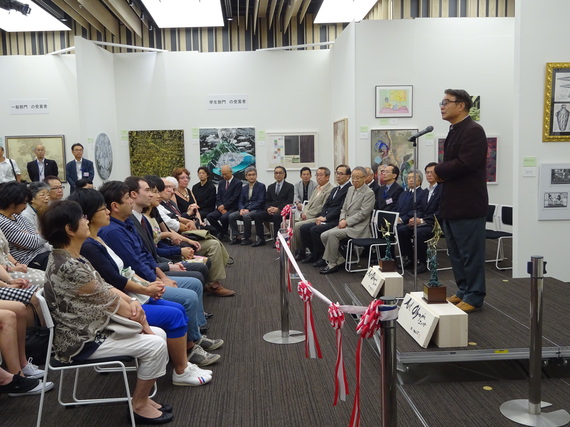 ARTISTS' Alert.....! There are many avenues to explore that may bolster your individual art careers, but the odds seem to be in your favor if you examine the cash and extra prizes totaling $500,000 that will be awarded at Art Olympia to 180 individual artists, along with the opportunity to show works in Tokyo. I notice people every day who are filling out lucky numbers for the Florida lottery at nearby convenience stores, but the odds of winning even a small prize are literally a multi-million to one! In all the competitions that I have judged over the past twenty-five years, I have never seen an equal to the opportunities and better odds of acceptance offered to artists by the Art Olympia organization. 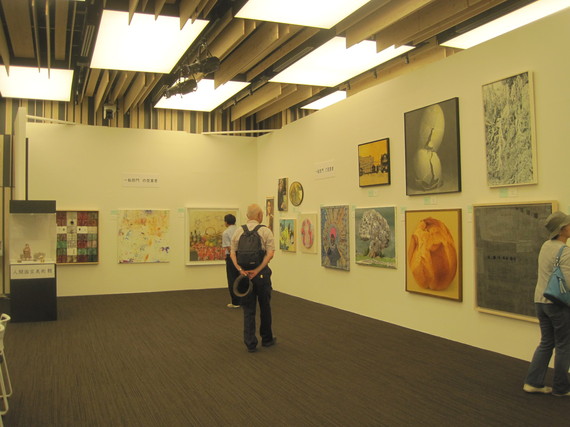 Exhibition at Toshima Ward Office Building in Tokyo, with more than 10,000 in attendance.

The concept is simple and direct and revolves around three core characteristics: This truly remarkable and singular competition has an outstanding team of professionals, and they have the necessary means, skills and determination to make Art Olympia the leading event of its kind. The ultimate goals are the development of a HUB for cultural exchanges among artists from all over, and to find and showcase talented artists from around the planet. The definitive objective is "the creation of new art for the next generation by world artists," and to expand overseas cultural exchanges that can pave the way to the creation of new art.

There are several important features of Art Olympia to consider: entries are accepted worldwide, with approximately eighty finalists from Japan and an additional 100 works from international sources. Another advantage is that the judges are experts from around the world, including Japan, the United States, France and other countries, who supervise the final review where a point system is utilized for fairness and accuracy in this impressive competition, which is held every two years. 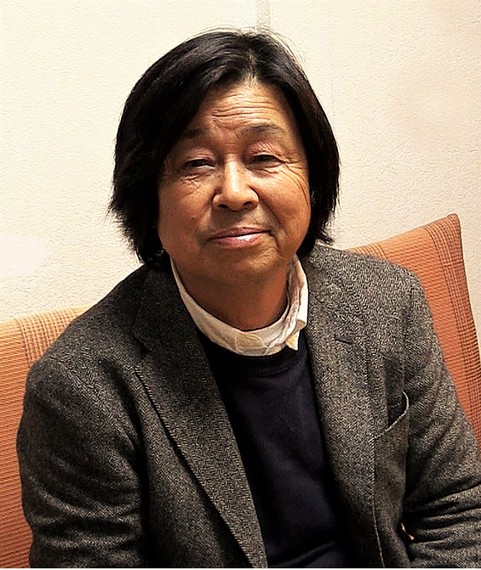 First prize winner Tadashi Tanaka, who is a professional house painter, as well as an artist.