Once there was a time when we had to defend art from being classified as pornography and, therefore, outlawed. Andres Serrano's Piss Christ. Robert Mapplethorpe's bullwhip-in-the-anus photo. When you say to a twenty-something, "Pornography: I know it when I see it," it's quite likely they won't know what you're referencing. Try the name "Jesse Helms," and you might get the same blank stare. It's ancient history. 1989.

Because in 2010, the fuzzy, narrow line will more often be drawn between art and advertising--which, let's face it, is a much worse scourge than poor old pornography.

Recently, New York City's Department of Buildings has decided that the Shepard Fairey mural on Houston Street and Bowery is not art, but advertising. It's a billboard, they say, promoting his show at the Deitch gallery. In this way, the government is echoing the sentiments of some of the people on the street, those who see Fairey's mural not as rebellious street art, but as marketing. The people have expressed their opinion by throwing rocks through the mural. The City is expressing its with violation notices.

It's an interesting turn of events. 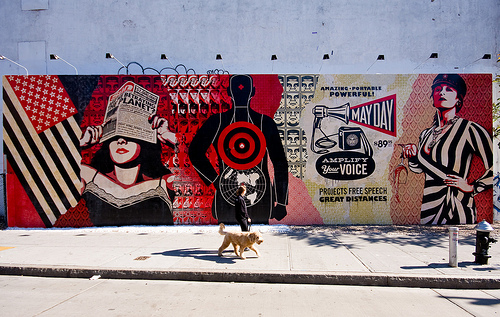 Said Fairey to the New York Post, "This is a work of art, not an advertisement, and it is disappointing and shortsighted that city officials want to ignore the rich history and role that public art has played in revitalizing this particular area of lower Manhattan."

That revitalization of the Bowery, also known as hyper-gentrification, is directly connected to the owner of the Houston Wall, Tony Goldman, uber-creator of high-end neighborhoods like Soho. He told the Post, "That wall is the last of the old culture. Each of those murals that I put up there are for the benefit of the public. I don't make any money off it. It's all artistic. You may not like it, but I'm going to put the best of the best up there."

"You may not like it" leads us to think that this is a question of artistic taste. You may not like to see a bullwhip shoved in a man's anus, but it's still art. What happens if it's blown up to billboard size and used to promote the sale of bullwhips? Or to promote a show of photos involving bullwhips in anuses?

"You may not like it" echoes with free speech cries--which, interestingly, is the theme of Fairey's mural. The words "free speech" are written across the mural's middle. It's confusing, isn't it? When the artistic mockery of commodification becomes commodified itself, we are walking into quicksand.

As they did 20 years ago for Mapplethorpe, will protesters gather to fight the City as it decides if Fairey's mural should be removed? If so, what will be defended--art or advertising?

I'm troubled by a trend in which artists today are more easily taken for advertisers than pornographers. Is there less of a drive to be sexually subversive and more of a drive to be subliminally persuasive? Is capital-A Advertising, in its infinite dark genius, positioning itself, via artists, to appear subversive and therefore revolutionary--and worthy of protection by the people?

It is time not to "obey," but to pay very close attention.