"The artist, with little or no awareness of what is going on in the field of physics, manages to conjur up images and metaphors that are strikingly appropriate when superimposed upon the conceptual framework of the physicist's later revisions of our ideas about physical reality. Repeatedly throughout history, the artist introduces symbols and icons that in retrospect prove to have been an avant garde for the thought patters of a scientific age not yet born. " - Leonard Shlain, Art & Physics" Chapter One: Illusion/Reality

This was the huge meme that grew inside my late father's head throughout my childhood. It spilled forth onto our dining room table, on walks along the beach during family outings, on napkins where he diagrammed what it would look like to sit astride a beam of light and how Einstein's Theory of Relativity corresponded with, say, Cubism and Marcel Duchamp's 'Nude Descending a Staircaise' and it spilled forth within the reams of paper that I edited, chapter by chapter of what would become his first best-selling book, throughout high school in and college.

Still in the chrysalis of his first career as a prominent surgeon, he started to give multimedia presentations about his ideas around the country. He always told the story of how I, his budding artist, would constantly tug on his sleeve during modern art museum visits while he flashed, to my horror, a slide of a 7th grade picture of me with a Dorothy Hamill haircut along with images for Cezanne, Einstein, Picasso and Bohr. He said my thousand questions about why modern art was great when coupled with his own questions about his understanding of the new physics is what spawned the idea for the book.

Lecture of Art and Physics by Leonard Shlain

Some lives are long and winding roads. When it comes to Art and Science, mine has been more like a Mobius strip or Escher's staircases or hands drawing themselves. Or perhaps more fittingly, the Magritte image on the Art and Physics paperback edition of a man looking at an egg and painting a bird. 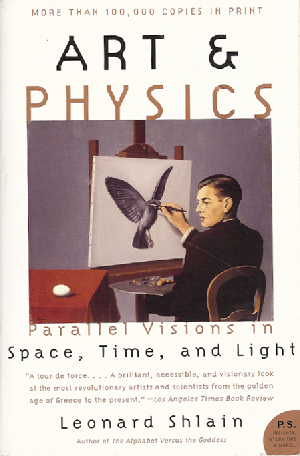 Science and art were woven like DNA strands through my upbringing. While my father appreciated and encouraged my passion and talent as a child, a common saying around the house was "You can be anything you want, as long as you're a doctor first." In middle and high school, along with art classes, I often attended Sunday morning rounds and an occasional operation. But in college, I also took Chemistry, Biology, Physics "just in case".

As a practicing artist I see a lot in common with my scientific counterparts. My studio is my laboratory where I'm constantly experimenting with new materials and subjects. I wear a really messy version of a lab coat splattered with paint. I 'publish' my findings in the form of exhibitions. I even conducted an experiment on myself while painting to dissect the the creative process, which I determined to have eight stages, in one my earliest essays for HuffPost. Of course whether or not my art is predicting the next major breakthrough in physics remains to be seen. 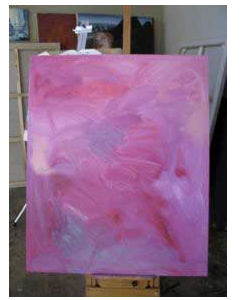 Eighteen months ago, when Arianna approached me to create the Arts Page, I took it on as I would any art project and still see it as a daily canvas, always wet and malleable, always a laboratory of ideas to share with others. But the fact that the medium is photons instead of oil paint and courtesy of the World Wide Web, which, lest we forget, was created so that Physicists at CERN could communicate with each other, was never lost on me either.

When Arianna surprised me by asking me to help launch science section too, with Cara Santa Maria and senior science editor David Freeman, my mouth at first fell open but then my eyes welled with how much it made perfect sense. My father's greatest gift with Art and Physics was to make both subjects accessible to the everyone. I know that I, along with Arianna and the incredible science team including Neil Katz, David Flumenbaum, Travis Korte, Emily Cohn and Tavish Nanda, feel the same way. I will continue my involvement here by regularly featuring artists standing at the intersection of art and science, illuminating science thought art, opening with "Dark Matters". I'm equally thrilled and honored to have some of the greatest thinkers, inventors and adventurers of our time blogging for us right out of the gate, including Dean Kamen, Physicists Lisa Randall, and Nobel Laureates Saul Perlmutter and George Smoot, III, Robert Branson and Buzz Aldrin. 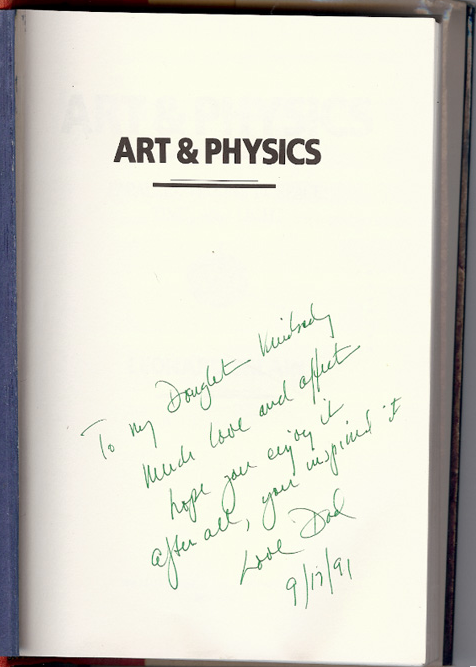 In 1991, my father handed me the first hard copy edition of his first book, Art and Physics with the following enscription. In the act itself, he had become, or transformed from scientist to an artist. Today, I hold a mirror to that act or paint a bird and present it to you.