In her outstanding new show, "Kisses Kisses," at bitforms, Yael Kanarek offers an illuminating view of her wide-ranging digital and multi-media practice. Co-curated by Kerry Doran and Dylan Kerr, and thoughtfully installed, the exhibition exists as a series of overlapping windows and screens. It begins on the street where the viewer confronts a wall of bright yellow flyers, the kind that used to be plastered all over the East Village. 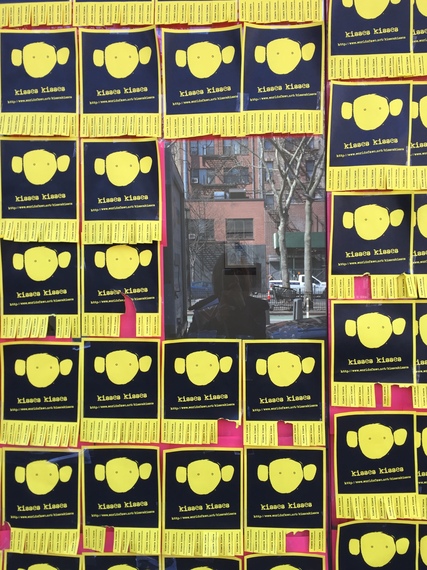 Literally the entire glass front of the gallery is papered with a cartoon drawing that features a URL for a newly created net art piece. Amidst all these screens, only a small window remains through which the viewer can look into the gallery and into yet another window: a Polaroid encased in a glass frame, which documents the original flyer in situ on a street corner. 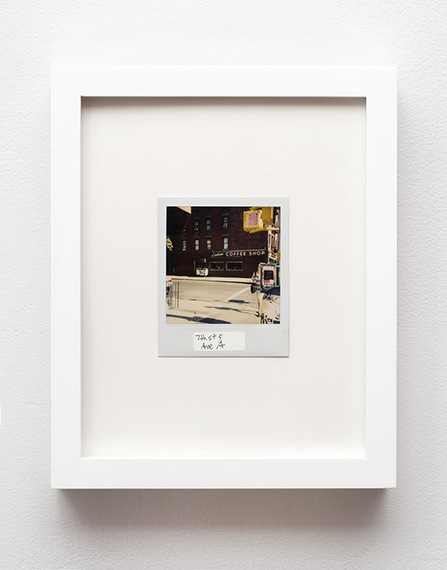 "Corner of 7th & A," Polaroid photograph

The inward side of the gallery front is likewise plastered with fliers, replicas of one the artist created in 1995 which include a URL that now no longer exists. Inside, much of the exhibition is devoted to never-before-shown twenty-year old mixed media paintings, which complement the multimedia narrative "World of Awe," sound pieces, sculptural objects, performance documentation and ephemera. Additional archival documentary Polaroids appear in a take-away zine that also contains "essays, conversations, lists, travelogs, love letters, puzzles, games paper sculpture, and good times for all." 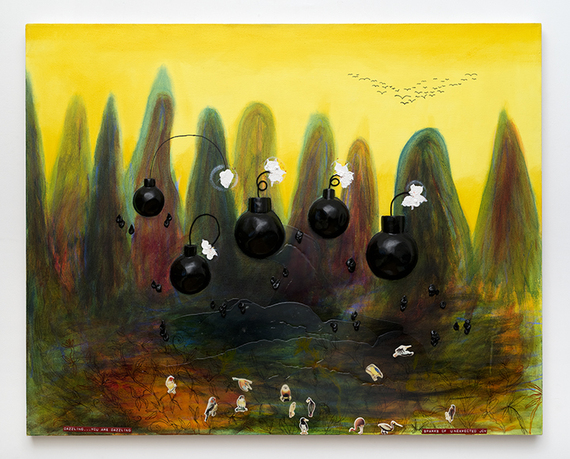 In these works, we can see now what perhaps we could not have seen then: how we communicate, how we "stay in touch," how we think of time and space and intimacy has profoundly changed. It is not so much that the content of painting and literature has altered, it is that, just as interface has supplanted "face-to-face" intercourse, the surface effects of those languages have become at least as important as the actual subject matter. Content and form here act as a unit to create digestible visual codes. 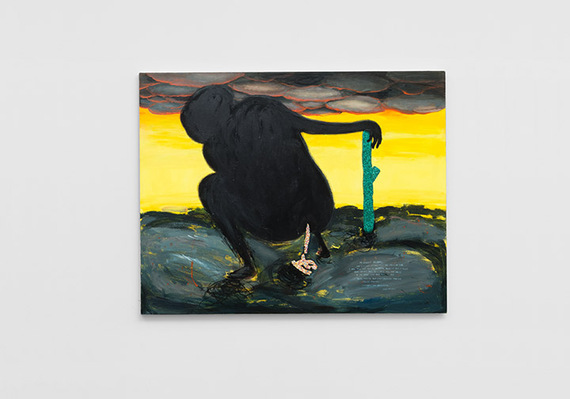 For instance, the lone cactus in "Candy Poop" signals the desert landscape through which the protagonist of "World of Awe" journeys. Kanarek enlivens this encoding, which anticipates the now ubiquitous use of computer icons, by invoking the lived reality of embodied existence or at least the increasingly distant memory of it. Thus, the texture of the cactus and the way the humanoid figure grips it, incites an experience of virtual tactility, though Kanarek playfully employs glitter instead of sharp spines. In some paintings, the reference to sensual experience is even more overt. Kanarek inscribes these with impossible-to-fulfill commands to "lick me," "smell me" and, anticipating Facebook by several years, "like me." 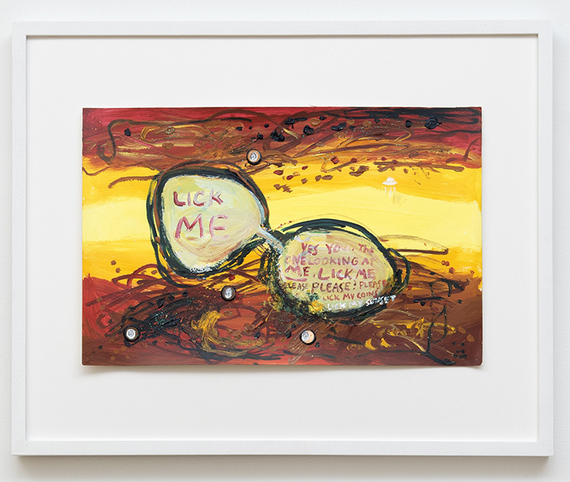 Soon after these paintings were completed, the artist began her multiyear online narrative "World of Awe" which consists primarily of a series of digital love letters between "The Traveler "and his/her "Beloved," a description of navigational tools, and places. Although social media has created an environment in which intimacies now occur in the open, it is important to remember that the first chapter of "World of Awe: A Traveler's Journal, Chapter 1: Forever, 1999" was featured in the Whitney Biennial in 2002, two years before Facebook launched. In it, Kanarek's traveler journeys through a barren desert landscape, frozen in a kind of Google Earth non-time, a "forever" between night and day seeking "lost treasure." Given that funny cat videos on YouTube, garner millions of views, it is perhaps unsurprising that these treasure crumbs are not some form of enlightened knowledge, but rather "surprisingly resemble candy sprinkles." 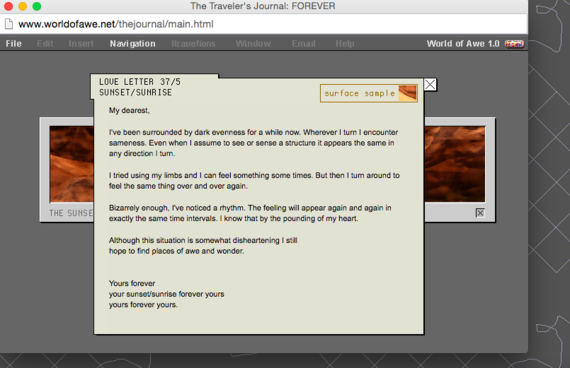 Philosopher Villem Flusser has characterized the time we live in as a crisis in what he calls "the gesture of searching" for meaning or for knowledge. With the recognition that there is no "transcendent intellect" or "absolute knowledge," this gesture has shifted from a "digging down" for reasons and final causes characteristic of 19th and 20th century science, to a seeking of possibilities, a moving along surfaces, and an examination of the aesthetic and relational qualities of things. In such a scenario, conventional orientation in space and time is lost. Thus, it is not surprising that The Traveler carries a number of odd navigational tools with him/her including a magnifying glass and a mood ring. 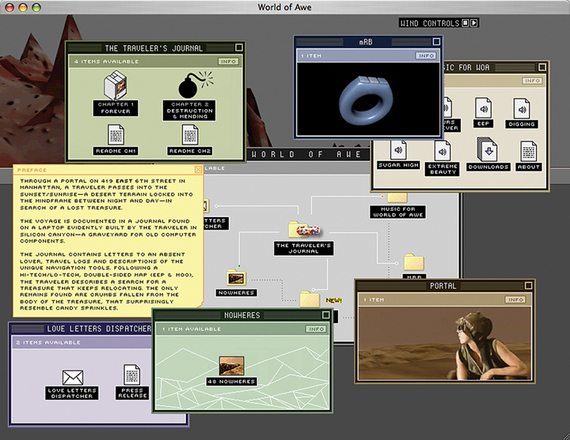 For Flusser, with this crisis of meaning, the primary distinction we make is not between "true" and "false," but between "art" and "kitsch." Moreover, kitsch is no longer related to superficiality, for, in a virtual world, there is no true depth. Rather, it describes a situation where, although gesture is easily read ("coded"), it, like the heart symbol on Twitter, yields little information. Kanarek's use of text is critical to her art as art. The overwrought poetic language (each letter ends with "Yours forever your sunset/sunrise 4ever yours.") and the longing they convey is what makes the letters so evocative, strange and "true," especially compared to a "like" and the limited set of reaction emoticons now available on Facebook, those now ubiquitous conveyors of encoded sentiment. 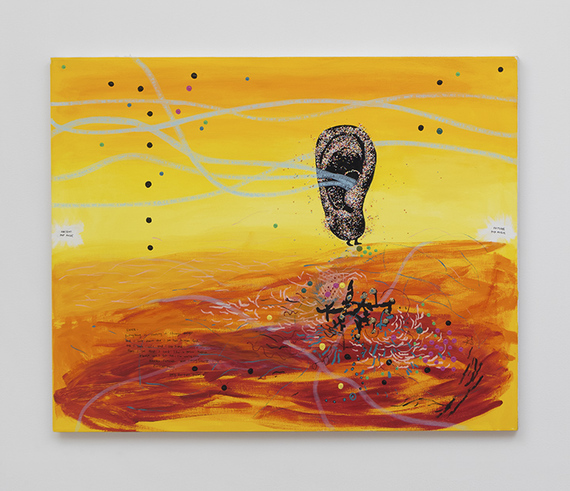 The tension between sensual embodiment and transcendence plays throughout the show. With an economy of means, the paintings transmit the feeling of gravity acting on a body. Many feature a solid black humanoid figure in some bent-over act--squatting to defecate, laboriously climbing up a hill. These figures which, at in an earlier time be read as "primitive," today can be seen for what they are, prototype emoji's for human gesture. This dialectic of embodiment and transcendence also operates in the sculptural piece Feedback-Loop (2004). Here, Kanarek took the Linux Kernel file source code defining schedule task and transcribed it on the verso (?), (the terms "front and back", "inside and outside" which arise from our embodied state are not so clear here) of a piece of vellum, semi-translucent calf skin parchment. On the recto, she hand drew a computer screen and wrote out the text of "The Love Letter: 69.325 from World of Awe, Chapter 2, Destruction & Mending." A candle which acts as the "heart" or kernel of the contraption illuminates the texts. There is also a pearl on a metal arm that serves as a digit-less "hand" for this fragmented, mechanical body. 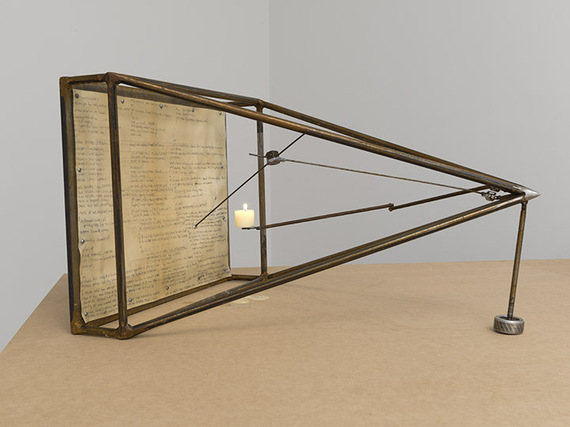 Kanarek is no Luddite. Although the sound of someone calling "hello" into the gallery as if across a vast Alpine valley is disconcerting, it also speaks to the everyday coexistence of virtual spaces and also to the human desire for connection. The call emanates from "Speaker Tree" (2001), a "tree" hung with naked audio speakers that resemble both artificial leaves and severed ears. Additionally, on a nearby computer, visitors can listen to the CD, Bit by Bit, Cell by Cell (2005), a collaboration between composer Yoav Gal and dance filmmaker Evann Siebens, consists of the love letters and travelogs from the Traveler's Journal set to music: a digitally manipulated soprano (Sarah Rivkin) and instrumental music composed for an Atari 800 XL. 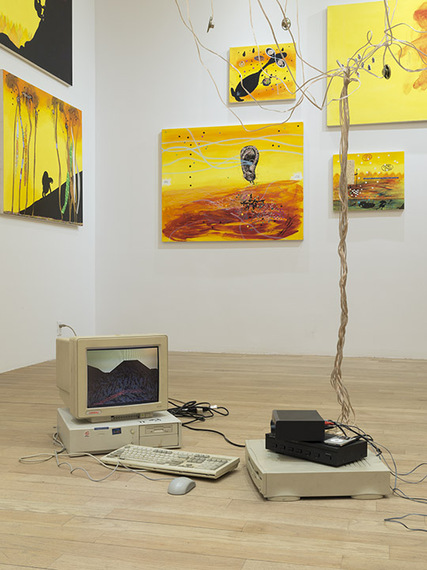 Despite the pervasive and unavoidable (given when the pieces were made) references to obsolete computer hardware, "Kisses Kisses" is a must-see exhibition, not because it offers a nostalgic look back, but because it reveals the truth of our future.

all photos courtesy of the artist and bitforms unless otherwise indicated