Economic policies annihilate. Numbers are the worst enemy of human values. Wall Street's suits make millions from the pain and misery of their fellow human beings. Politics serves a few big interests. When corporate interest ends, crisis sets in; decline is followed by abandonment. This is a story most of us have experienced or consider a given.

Aside from individual stories there are also the stories of entire communities or even cities that bear the marks of these circumstances. The proud city of Detroit is one of these, or perhaps the most famous. The details are insignificant in the face of the desertion you see when roaming its neighborhoods. The urban landscape speaks for itself. And these once-magnificent derelict buildings like Michigan Central Station reveal the city's recent history, or rather its consequences.

Yet there is a word that creates a glimmer of hope that something new may emerge amid the desolation. This word is synonymous with the meaning of rebirth, or renaissance, through the century. It's a word familiar to everyone. 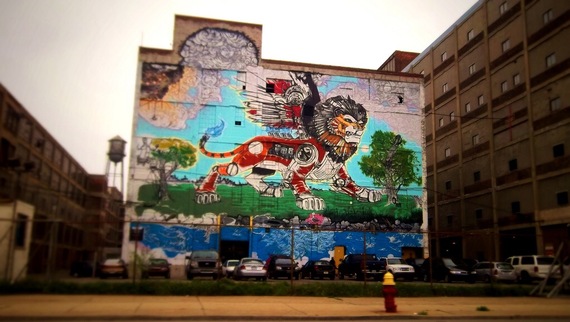 Living proof of this has a name in Detroit. It's The Russell Industrial Center. Since 1915, The Russell has one of the great industrial complexes in this one-time bustling industrial city. It was designed by Albert Kahn and was an auto-body manufacturing plant. During the second world war, it handled manufactured parts for the U.S. air force. In the 1970s, it slid into decline with the rest of the city's economy until it was left dilapidated for several decades.

That was until the start of the new millennium and a change of ownership. Detroit's art community "occupied" The Russell, filling the empty "giant" with color and music, transforming it into an arts multiplex.

"The Russell Industrial Center currently has more than 140 on-site tenants with the majority being artists, making it one of the largest artistic communities in the Midwest United States. It is a haven for artists and small businesses alike. The new industrial Mall is one of the biggest projects going on here at the complex, and will welcome all small businesses and manufacturers ranging from the food industry, to furniture, to the arts and fashion, and beyond," says Yorg Kerasiotis, one of the first artists to move in to The Russell and help develop the arts community that is now based there.

In recent years, The Russell has hosted a range of exhibitions and concerts; groups like the FlashClash have used it as a setting for their music videos. Scores of struggling artists have literally found refuge there. One of them is Steven Triant, lead singer for My Excuse. When the band's other members decided that they didn't wish to continue this lifestyle, he found a free roof under The Russell and, especially, an opportunity to interact and join the local arts community.

But most importantly, what the Russell offers is a shining example of how art can revive all those abandoned industrial plants and transform them into creative spaces, holding out hope to urban societies in an era when hope, through art, is a necessity.