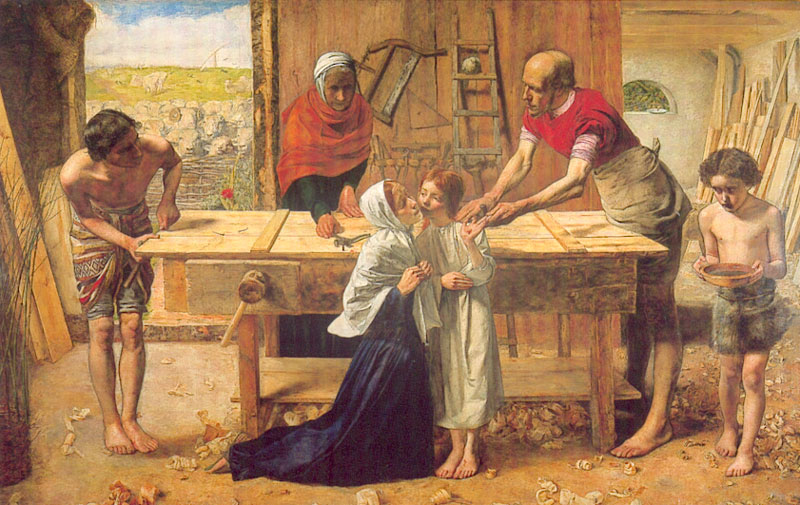 An exhibit of Pre-Raphaelite art opened at Washington's National Gallery of Art on Feb. 17th that will run through May 19th. This art genre was launched in 1848, when seven British artists led by William Holman Hunt, John Everett Millais and Dante Gabriel Rossetti, all associated with the Royal Academy of Art in London, formed a secret society called the Pre-Raphaelite Brotherhood. According to a New York Times review of the exhibit, these artists "were repelled by the decadence of art and society, much of which they ascribed to the Industrial Revolution. They wanted to turn back the clock to purer, more thoroughly Christian times."

One painting in the exhibit, Christ in the House of His Parents (1849-50), by John Everett Millais, features Jesus and his family. The setting is Joseph's carpentry shop. Mary is seen comforting young Jesus, while Joseph examines a cut from a nail on Jesus' palm (a symbol of the stigmata of the crucifixion). It appears to be a realistic portrait of a family at work. Why then did it incite public outrage? It was too Jewish was the critics' accusation. They deplored the artist's depiction of a "gawky" Jesus in an ordinary working-class setting.

When the painting was shown at a Royal Academy Exhibition in 1850 the publication Builder called it a "painful display of anatomical knowledge, and studious vulgarity of portraying the youthful Saviour as a red-headed Jew boy, and the sublime personage of the virgin a sore-heeled, ugly, every-day sempstress [seamstress]..."

No less notable, novelist Charles Dickens was equally distressed by the display of a "wry-necked boy in a nightgown who seems to have received a poke playing in an adjacent gutter." In a scathing review, the London Times said that Millais's "attempt to associate the Holy Family with the meanest details of a carpenter's shop, with no conceivable omission of misery, of dirt, of even disease, all finished with loathsome minuteness, is disgusting."

A similar incident occurred three decades later, in 1879, when German artist Max Liebermann painted The 12-Year-Old Jesus in the Temple with the Scholars. The image of Jesus debating the rabbis and scholars was inspired by the well-known account of the event in the Gospel of Luke (2:46-47). It was an unusual painting for Liebermann, a secular Jew who created few pieces of religious art. When the painting was displayed at an international art show in Munich that year it met a storm of protest. The public and the critics charged that the painting blasphemed Christianity. The Crown Prince of Bavaria voiced his protest, prompting a debate in the Bavarian Parliament.

In view of these efforts to recast Jesus as a Christian and erase his Jewish identity and lifelong commitment to Judaism, is it any wonder that classical Medieval and Renaissance artworks routinely omitted any Jewish connection for Jesus, his family, and community? In my walking tour of New York's Metropolitan Museum of Art and examination of other classical artworks, I noted that virtually none showed even a hint of the image represented in the Gospels of a thoroughly Jewish Jesus immersed in Jewish life, teachings, and practices. At every turn I was confronted with a blond, fair-skinned, Northern European Jesus (and others in his family and followers). What's more, they appear in anachronistic settings of latter-day Christian Saints and Christian artifacts, in palatial surroundings far removed from Jesus' life in a rural Galilean village

This ethnic cleansing of Judaism in artworks must now be reexamined for its contribution to anti-Semitism by omission of Jesus' Jewish identity. In setting Jesus apart from the others -- the Jews -- it established a false dichotomy that Jesus and Jews were of different ethnicities and religions. The distortions and falsification of biblical history not only led to the persecution of countless numbers of Jews but contributed to the great divide between Judaism and Christianity, which only now is on a path of reconciliation.

Bernard Starr, PhD is a psychologist, journalist, and professor emeritus at the City University of New York, Brooklyn College. He is the author of Jesus Uncensored: Restoring the Authentic Jew.