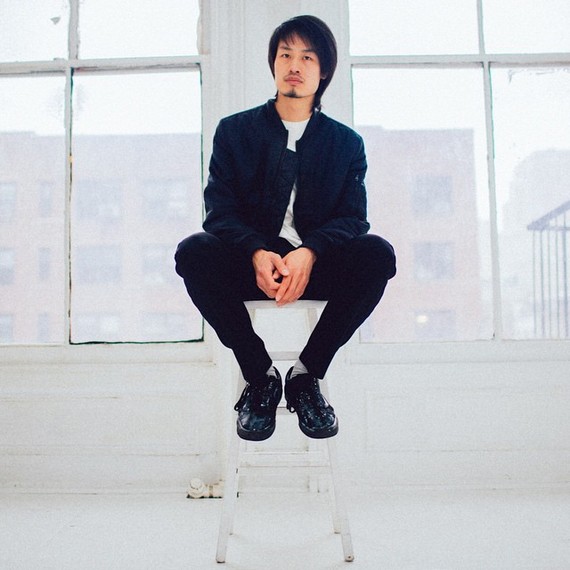 As New Yorkers we are constantly around a diverse group of individuals yet are probably too busy with our own schedules to take notice . We sometimes witness amazing subway performances, but then sometimes are bothered by terrible ones that almost get us kicked while sitting on the train home. We walk by street artists and the homeless every few blocks like they are trees and go about our day . Every now and then though, we all see something that grabs our attention and we take out our headphones, and take a break from our hectic schedules to enjoy some of the magic that makes this city great . A while back I had one of those days just walking through union square like I do most days. I noticed an epileptic homeless man begging, which is unfortunately a common sight in New York City . What got my attention was taking place directly across from the homeless gentleman. An artist named Pairoj began to lay out his canvas with supplies then proceeded to paint the gentleman across from him on this large canvas laid on the sidewalk . There was a sign that read "Hope For Him" and a jar for money . Clearly this money was being raised for the homeless man, which is quite the selfless move from a stranger. The epileptic gentleman was clearly in need of help and what appeared to be a stranger was investing his time and creative talents to help this man . I was completely moved by what I was witnessing and stuck around to see how the crowd began to form . Slowly people started talking to Pairoj and the homeless man and donating and asking questions as Pairoj continued to paint. Pairoj was painting a large oil portrait of this man which conveyed so much emotion. As if this wasn't moving enough to witness first hand, the homeless man took out his supplies and began to draw what he saw in front of him . He was drawing Pairoj drawing himself , it was amazing . Two strangers across from each other, who you would think have nothing in common actually having more of a connection than most of us have in our day to day interactions .

What Pairoj did was something much more valuable than just money to the homeless. He gave him visibility, as a human. Through his deeply expressive portrait work that can be found set up all throughout Manhattan, Pairoj is able to bring humanity, compassion and awareness to a very serious problem. People were compelled to talk to both Pairoj and the epileptic man as well as donate money. He got the conversation started, the who, the why, the how can I help conversation. When most would have continued walking , the art drew in interest and compassion. Not just in NYC but as humanity why is it that we ignore those who need help, and even more so if they look like the stereotype that one "in need" looks like. In NYC alone there were over 60,000 homeless citizens with more than 23,000 of those being children this past year. These numbers are way too high for a 1st world country, world power, and "greatest city in the world." It's embarrassing to hear tourists that come to NYC for holiday say that a major take away from their NYC experience is that we have a major homeless problem. We see it everyday but what does it mean to be homeless in NYC? Turns out Pairoj has a little experience walking in those shoes as well.

The more I talked with Pairoj the more interesting he got . Pairoj wanted to better understand what a day in the life of a NYC homeless citizen was like so he lived in a homeless shelter for 3 weeks. He was interested to hear their stories and talk with them only to find that it is that exact same thing that they are in search of. Someone to listen and treat them as a human. For 3 weeks Pairoj cooked meals for them, got to know, and painted those he befriended in the shelter. He invited his new friends to his exhibits in the city and says they are beyond shocked to see their own face in a gallery with such crowds. I can only imagine the feeling of visibility Pairoj has given to those who go unnoticed far to often through his art. A beautiful giant portrait in a fancy gallery in the city is not something we see ourselves in everyday. The take away for me is that we don't need to only give money to help the homeless or to make the world a better place for that matter. Pairoj's gift is art so he was able to create a way to help not just through money but by bringing humanity back to those who need our compassion . We all have our own special way to give back to the world and even if you don't have a dollar you can always treat the homeless as humans because they are nothing less and we are nothing more.

Pairoj plans to continue his work and experience here in NYC for two more years, then return to his home country of Thailand to give back to the youth art programs. He has been apart of many exhibits and events which all give back to the community. Proceeds from his artwork sold have gone towards the art youth programs in Bangkok as well as the Bowery homeless mission and of course repaying those who have helped him along the way . I have no doubt he will continue to positively impact the communities he is a part of and leave a positive impression on those he meets. I'm happy that a normal New York day involved me witnessing his work which lead to hearing his story. Its good to see someone doing what they can to give a helping hand as we all should be. We are all just people trying to make it the best we can. Pairoj is very thankful for everyone that has helped him in his life which allows him to be the artist we all could learn from. Pairoj would like to thank James Lim of Spicy Shallot and Keith Schweiter for giving him the opportunity to create.