This article originally appeared on artnet News. by Ben Davis

It's a new year, which is a fine excuse as any to ditch old bad habits. Here below, I have assembled a not-at-all exhaustive list of art-writing words that I could do without in 2015. I admit, I've been guilty myself of abusing some or all of them—but of course that's what New Year's resolutions are for. 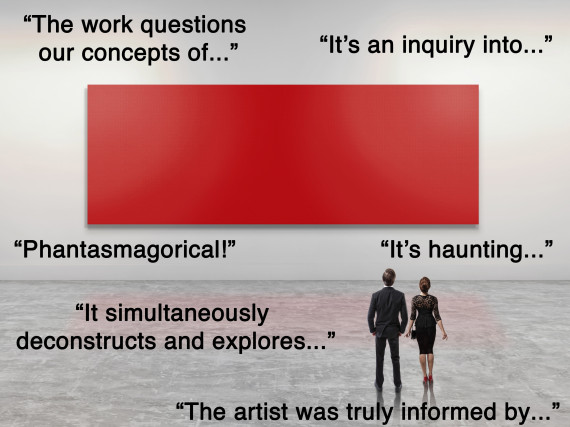 1) assembles As in, “This exhibition assembles works from throughout X's career…." Why use this universally accepted but fairly stilted convention? Perhaps it makes putting together an exhibition sound excitingly technical—but it also makes the exhibition in question sound as if it were put together from a kit.

2) Borgesian Jorge Luis Borges is the most overused of all literary references in art, and calling something "Borgesian" has essentially become a shortcut way to create an aura of luxuriant enigma. In some cases, the art in question may also include 1) mirrors, 2) labyrinths, 3) encyclopedias, 4) very detailed invented worlds—just like the works of the Argentine author.

(Long side note: I once saw Lawrence Weschler interview Open Veins of Latin America author Eduardo Galeano at the Society for Ethical Culture. Weschler just kept coming back to the idea of “mirrors," and asking Galeano about his relationship to Borges. After maybe the third time, Galeano had to shut him down by saying, “I love Borges. Borges was a great writer. But he was a racist." Which is true. And his politics stank too. Think about that the next time someone calls something “Borgesian.")

3) businessman/woman This is an oldie but a goodie that comes to me from the Art + Auction copy desk (and could be supplemented by the even vaguer terms “millionaire" and “billionaire"). As in, “For this interview, we sat down with businessman and art collector X…." If the person is—oh, I don't know—an arms dealer, maybe just say that.

4) challenges Particularly in these usages: “challenges the viewer…" or “challenges ideas of…." Very few things are genuinely challenging, particularly when the art crowd is so very blasé about being challenged.

5) concerns Artists are “concerned with issues of representation," or “tackle concerns of authorship." They are really “concerned" about these things! It's super “concerning!"

6) controversial There are artworks that really merit the label “controversial," but the term is killed by overuse. Just because people are saying mean things about something on Facebook doesn't mean it is “controversial." It just means that it is on Facebook.

7) deconstructs This is a paradoxical term in that the people who know what “deconstruction" actually was will probably roll their eyes. But the air of theoretical sophistication that it brings seems to me the main reason that it is so overused. Saying that Marilyn Minter's book featuring photography of female public hair "simultaneously deconstructs and glamorizes her subject" seems rather gratuitous, no?

8) explores Specifically as it refers to the artist's intention: “She explores ideas of…." In general, if something is still in the exploration phase, then I would give it some more time before writing about it.

9) famous There are artworks, artists, and art things that are legitimately “famous" (as in, you might find news of them in a non-art publication), like Michelangelo's David or Thomas Kinkade's The Christmas Cottage. Most often, what the author really means here is “talked about among art people."

10) haunting This is a popular shortcut to making it sound like a work is really good if there is not that much more to say about it.

11) heterogeneous You could say that the décor in my apartment is a “heterogeneous ensemble of elements" but that would just be an unnecessarily high-flown way of saying that it is a mess. In any case, there is definitely a reason this word gets used so much—essentially, eclecticism is the order of the day—but it is an unlovely way to do the job.

12) hybrid This may well be a cliché about clichéd art writing. And yet the tide of hybridity goes on, unabated.

13) iconic This is like “famous," only worse, since even among famous things you can count the real “icons" on two hands. It smacks of marketing copy.

15) immersive I take it that the idea of being "immersed" in something is a big, big selling point. Gagosian Gallery described Takashi Murakami's recent show as an “immersive installation;" but no, it was just full of big things. Which is not the same.

16) informed by To me, when a writer says that an artist's work was “informed by" a certain set of ideas, that can be translated to, “What this show was about was unclear to me—but then I read the press release and it said the artist had read something."

17) an inquiry into This is similar to 16, above, but more ambitious. Still, saying an art show is “an inquiry into notions of X and Y…" is a good way to make it sound like a B term paper.

18) interrogates This is so common it hurts every time I read it. It makes art sound literally torturous.

19) interested Artists may well be “interested" in things (or, worse, in “notions" about them)—beauty, sexuality, globalization, the history of art itself—but this is a passionless, clinical way of pitching their work. Artist Steve Lambert has a good essay about why he struck the phrase "I am interested in" from his vocabulary. Personally, when I hear the word, I think of Susan Sontag's "An Argument About Beauty:" “Imagine saying, 'That sunset is interesting.'"

20) “on acid" No matter how straight-laced the writer is otherwise, if an artwork looks like a vaguely freaky version of something else, than you can be sure that it is that-thing-on-acid. But, you know, man, acid is so passé. Everyone is into "crazy clown" now.

21) palimpsest Describing something as "palimpsest-like" is a good way of telling the reader that you are really invested in arcane cultural trivia. (For the uninitiated, a palimpsest is “a manuscript or piece of writing material on which the original writing has been effaced to make room for later writing but of which traces remain.") I don't know what joker is responsible for making it cool to do so, but when I find out, you can be sure I will write a merciless clerihew about him.

22) phantasmagorical This term is like palimpsest, only on acid. I am almost certain no one outside of the circle of people who get paid to write about the arts ever refers to something as “phantasmagorical" (except possibly people who are still crazy into 19th-century magic lanterns).

23) problematic A tetchy way to say you think something is wrong that immediately invokes the hothouse feuds of academia. Its subtext might be, "I strongly and forcefully disagree with you—or perhaps I am merely irritated because you didn't use proper MLA-style footnoting."

24) profound As a rule, it seems that artworks aren't just moving these days; they are “profoundly moving." An artist doesn't just get it; she has a “profound understanding" of what's going on. So much profundity out there! This is similar to just adding an exclamation point to things for emphasis!

25) provisional “Provisional Painting" has had its moment, and there is, no doubt, a lot of stuff that looks half-finished or fragile or tentative or underproduced or so-wrong-it's-right or just kind of funked-up. Nothing wrong with that. But “provisional" can mean some of that or all of that, and a lot of color is lost as provisionality becomes a rigid grid to view things through.

27) readymade I know I am not going to get my wish on this, but I think it's time we put to bed the entire industry of art criticism built around invocations of the “readymade." In a world full of interesting and plenteous manufactured things, artists sometimes use found objects—sometimes altered, sometimes just-as-they-are. (Art historian Alex Potts's idea of the "As Found" is a much better framework, incidentally). That is now an over-100-year-old way of working, and needn't be burdened with the idea that to do so means that the artist is "revisiting the tradition of the readymade."

28) referent Unless you are doing serious semiology (which mostly you are not, right?), this is an unnecessarily technocratic sounding synonym for “subject matter."

29) revelatory There is a major case of revelation inflation in art. (I can't help it: When people start having revelations at the drop of a hat, I start to think of the old Saturday Night Live character, "Orgasm Guy." Now you will too.)

30) rhizomatic Let's conclude with some more fun with Gagosian press releases: This year, the mega-gallery pitched Nancy Rubins's monumental sculptures of stuck-together toys as “rhizomatic," which, as Martha Schwendener pointed out, is all wrong. (The full sentence from the release is, "Geological in scope and metastatic in formation, these rhizomatic structures brim with dark energy"—yikes!) How did an adjective derived from a botanical term for an underground root structure become a way to describe basically anything that looks, you know, really complex? Philosophical duo Gilles Deleuze and Felix Guattari used the image of the "rhizome" in their opus A Thousand Plateaus as a way to describe meaning that defies being captured in any linear way. They would probably be spinning in their graves to see it transformed into a glib way to package art.