One man's road filled with the rotting, mangled corpses of unlucky fauna is another man's dining table.

Specifically, this UK man: Arthur Boyt, 73, has made eating roadkill a hobby. But he doesn't discriminate between fresh-looking specimens and festering cadavers -- he'll eat anything he finds. Thankfully, VICE followed him around his home county of Cornwall to document his filthy experiment in gastronomy (video below).

"I ate a badger once that someone else had picked up because they wanted its skull. It was blown up like a horse on the western front and it smelt rather horrible," Boyt told VICE. "When I cut into it the flesh was green but nevertheless I persevered and stewed it. It made the house smell like the old fashioned mental hospitals used too, but boy it tasted delicious!"

Boyt started as a taxidermist and says he used to simply mount roadkill. Later he decided he should eat what he finds. His meals include ferrets, badgers, and rabbits, among others. Sure, he's hit a few animals himself, but he "avoids killing anything" by his own hand (or car tire). 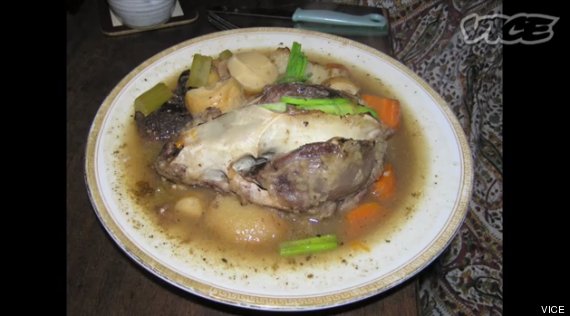 He'd probably have a great time living in Montana, where it's now legal to eat the animals you kill with your car. He should, at the very least, take a trip to London, where roadkill couture has hit the fashion scene. Earlier this month, a gallery there featured bridal gowns covered in dead animals. YUM.