Holiday movies and whimsy go hand in hand (unless they don't), and frankly this year Arthur Christmas knocks my stockings off. It is most gratifying to witness tried-and-true formulae (Santa, reindeer, elves, prezzies) brilliantly blended with high-tech upgrades (Web-savvy toddlers, spaceship-like "sleigh," tracking systems literally straight out of NASA) -- but here it's the whimsy, lovingly folded with wit and warmth, that brings it all home for audiences of all ages. Leave it to England's audacious Aardman studios (Wallace & Gromit, Chicken Run), now in cahoots with the digital deities of Sony Animation, to drop a treat this huge, homey and hilarious down our "chimbleys." 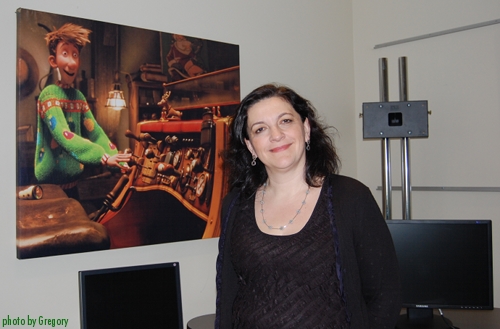 Arthur Christmas is the sort of movie for which I could gush with all sorts of phrases never used in ad copy, such as "Insightful yet peculiar!" and "Zaniest slippers ever!" and "You'll believe a curmudgeon can fly!" But instead let me slather the production with conveniently reprintable raves, such as "A magnificent ride!" and "Wondrous, witty and wise!" and "If you don't HO-HO-HO throughout, please check your pulse!" I love this movie, so I sat down with its director and co-writer Sarah Smith to discuss what she's too modest to call "A New Holiday Classic!" (so I will). Was it difficult, straddling "the Pond" to satisfy senses of humo(u)r both British and American?

"Uh, we didn't try -- at all," responds Smith, laughing freely. "I mean, being that I wrote completely from the point of view of what we (with co-writer Peter Baynham) thought was funny, and made us laugh, you know? Because I think if you don't do that you're patronising your audience, you're going, 'Well, they'll like this. We don't, but they will.' And at that point you're removing yourself from your audience. And I think you have to try and be honest and put up what you love, and hope that your taste somehow strikes a chord with your audience." 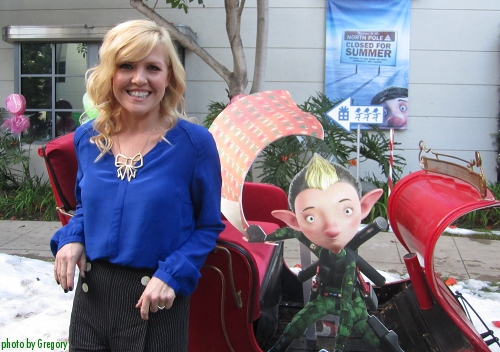 Having met Jensen at Sony's (Arthur) Christmas-in-October sneak-peek party (with real snow in SoCal!), I ask director Smith about working with her. "I love Ashley. I've always loved the comedy stuff she does. And she's just a brilliant mixture of fiesty and cheery and perky and lovable and all the things that we wanted that character to be, and she throws herself into it! Massively! If you see the videos of her doing the voice, I mean, the physicality of what she's doing -- when she screams! -- and I think she really puts a lot of physical energy in, and you can hear that in the voice, you can hear that she's absolutely going for it!"

Addressing us at the preview party, Jensen relates of the project's humble beginnings, "When I first started, all it was, was a few wee pencil drawings! And every time I went in and did another session, the animation got richer and more vibrant and more elaborate." Brandishing her own rave, she calls Arthur Christmas, "a wonderful family film with a fair bit of adult humo(u)r sprinkled in as well." (Two words: Lead paint.) 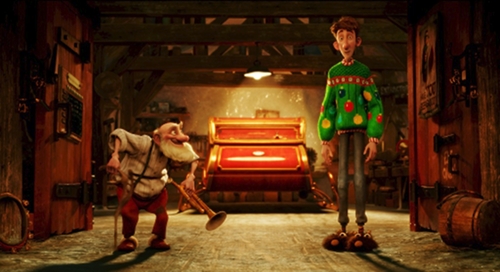 As for Mr. Nighy, Smith reflects: "Initially I thought of going to the comedy heroes of my youth, who are now in their 'Grandsanta' years -- which Bill isn't, I hasten to add -- but on the other hand I knew that I wanted someone with great energy, and someone wicked and fun who you want to spend a movie with, and Bill Nighy is one of those people. He's a got a sort of spirited naughtiness to him.

"I was due to meet him," Lady Smith continues, "and then actually I was pregnant and I was rushing to the hospital, and we cancelled the meeting and then I was confined to Bristol -- so, bless him, he got on a train and came down to Bristol, because he really loved the script, and he really wanted to be part of the movie. And so I lay on a bed, while he stood by a microphone, trying out voices. And he was just looking for something original, something that he hadn't heard before. And he tried voice after voice after voice, and I would go, 'That one! That one! That one!' -- and we kind of worked toward a style, and then, of all of the stuff he'd done, I picked four of five lines that felt to me the most promising, and we animated them." Smith chuckles at the memory: "But then when we first came in to record Grandsanta, he had really come up with an original voice for him, so it wasn't second nature. So I would have to keep replaying him the animation test over and over again, going, 'No, not that one! This one!' Until eventually he completely inhabited that character."

Smith lights up at how much fun it is to work with Nighy, due to his flexibility, and I recall a commentary track concerning Max von Sydow in What Dreams May Come, sternly telling the director that he was pleased with his take, he wouldn't be changing it, but if they'd like him to do it again exactly the same way, he would dutifully oblige. Not so, Nighy. "He's brilliant!" enthuses Smith of her Grandsanta. "He kind of cuts through all actorishness!" 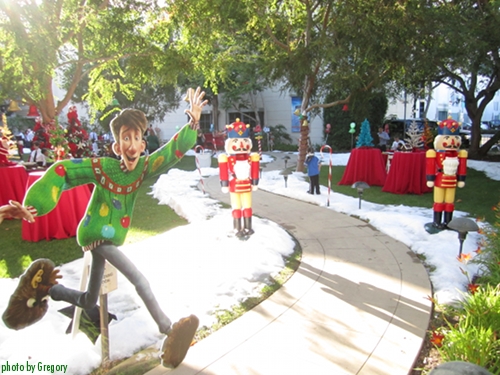 I came for the party. I stayed for the movie.

I ask Smith -- Oxford, comedy, BBC and even Michael Moore veteran that she is (also citing The Jungle Book and Chitty Chitty Bang Bang amongst her fave films) -- about coming on board with Aardman (founded in 1972 by Peter Lord and David Sproxton, joined by Nick Park), and how things evolved from there to directing their first co-production with Sony. "I joined Aardman about five or six years ago, really just for a six-month stint, because they were looking to develop a new slate of films." (Next up: Aardman/Sony's The Pirates! Band of Misfits.) "And that's not really exactly what I've done (before), but I loved Aardman, and I thought that was a fantastically interesting time in the company, and it was a great hono(u)r to be allowed to be a part of that process. One of the films that I picked up in that time was Arthur Christmas, and I just fell in love with it, and it became my joint baby and I couldn't let go of it." 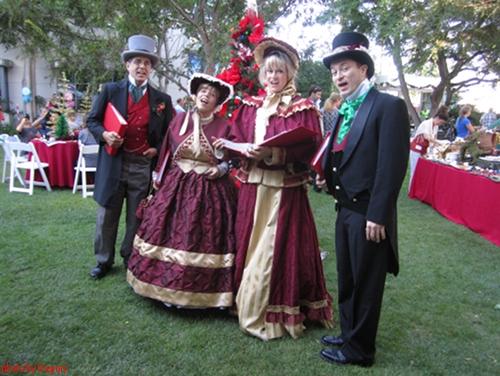 Things that make you go: "Well, this is rather nice!"

Bob Osher, President of Sony Pictures Digital Productions, warmed us up to the genesis of Arthur Christmas thusly: "Sarah called her very good friend Pete Baynham, who's a writer (Borat, Bruno), and said, 'Pete, what have you got for me?' And Pete said, 'I have the world's greatest idea about Christmas.'" Once Aardman hooked up with Sony in 2007, Sony's digital artists worked with Aardman in England, then "Aardman West" was set up at Sony.

American visual effects supervisor Doug Ikeler speaks with me as well, relating stories of the year and a half spent developing Arthur Christmas in Bristol, and then the wild ride of production that followed. "It's all in a scale of 200% more than anything we've ever done before. So just doing that much, and doing it as fast as we were doing it, it was actually pure pleasure. Because we were relying more on the instincts that we had initially -- you know, sometimes something is so big that you have to think about it, and it gets slow. We were building so much so fast that we were really just relying on what we thought was cool at the time!" Ikeler discusses the "tactile" nature of Aardman's classic stop-motion work, but also that, with Arthur Christmas, it was agreed from Sarah through the crew to create a new look. He also fondly mentions a scene Smith directed which truly tugs the heartstrings (always a feat, in animation!) -- but as it's in the third act I won't spoil it here. 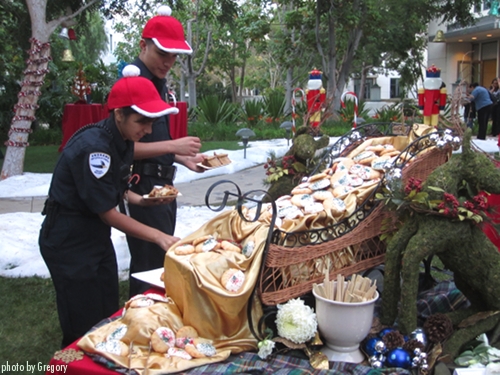 When security people get cookies, all shall know Peace.

I'm curious about balancing the many demographics represented in Arthur Christmas (the movie does literally span the Earth), whereupon Smith affords appropriate props to the little people: "Well, we made sure that the elves were a multinational force -- and that was something that Sony suggested to us, which we thought was a good idea, because that is the children's world. I mean, children live in a completely multicultural society, and that's what it needs, to look like their world." (Indeed: Ikeler confirms that, from an initial six prototypes, the animation software called Massive enabled them to create the movie's million or so elves.)

Smith knows her business, and puts it all, challenges and triumphs, in perspective: "We did have the problem -- I mean, we had the sleigh and reindeer that could travel incredibly fast around the world, but the problem is: where don't you go? Usually on a road movie, you're restricted by the miles-per-hour of the car," she laughs. "With us, we could go anywhere, so in the end we tried to find a path around the world that touched as many contrasting worlds and places as possible."

Indeed, as Santa himself intones: "So many countries these days!"