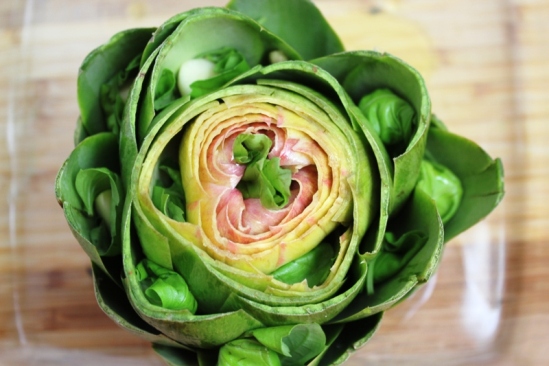 It's peak artichoke season from March to May, so don't let this intimidating vegetable scare you away! It's delicious, fun to eat, and high in antioxidants.(1) Most recipes call for baking, boiling or steaming, but which is the best way? I tried all three to find out!

But before we jump into cooking, let's get a little background on the vegetable itself. Much like broccoli, cauliflower and capers, artichokes are actually flowers! Specifically, the artichoke is the flower bud of a plant in the thistle family. It is thought to have originated along the Mediterranean, and it's been a part of the cuisine of that region for over a thousand years!

Artichokes are high in phenolic compounds, which give them their antioxidant power and contribute to rapid enzymatic browning when cut surfaces are exposed to air.(2) To stop this reaction, I rubbed a half lemon over the exposed areas to keep them from browning too quickly. If you prefer your artichoke lemon-free, a good rinse with water will slow the browning too, albeit a bit less effectively than lemon. 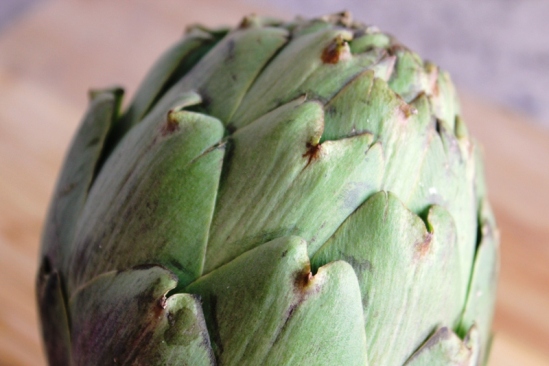 These are proportions to make a single artichoke, so converting this recipe to any number of artichokes is easy. I recommend cooking two at a time because this recipe calls for half a lemon and half a head of garlic. With the leftovers from making one, you can easily make a second, assuming you have 20 or so leaves of basil on hand. Now let's get cooking!

Ingredients:
1 medium-sized artichoke
1 Tbsp extra virgin olive oil
1/2 a lemon
1/2 head of garlic (5-6 cloves), each peeled and chopped in half
10-12 basil leaves (one per garlic chunk)
Salt and pepper to taste

Directions:
1. Wash and trim your artichoke. For a guide on how to trim (and eat) an artichoke, check out this post on Simply Recipes: How to Cook and Eat an Artichoke.

2. Rub your 1/2 lemon all over any cut surfaces of the artichoke (and stem) to prevent browning. Then, starting with the outside and working in, gently loosen and spread out the leaves of the artichoke. Drizzle the extra virgin olive oil and the juice of your 1/2 lemon over the artichoke (watch out for runaway seeds!), reserve rind for later step, if boiling. Now wrap each half garlic clove with a basil leaf and tuck it into a leaf. Make sure to get at least one big one in the center! Add salt and pepper to taste.

Now we're ready to cook! But which is better--bake, boil, or steam? 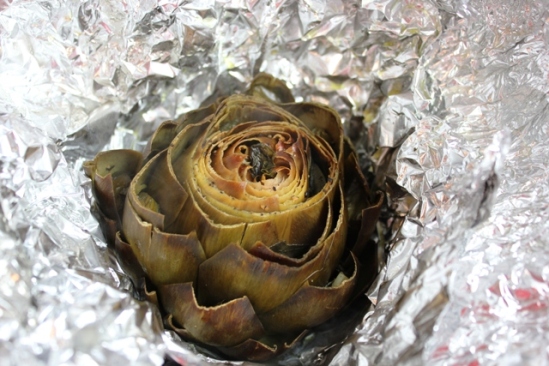 Preheat your oven to 425F. Wrap your prepped and seasoned artichoke in two layers of heavy duty tin foil and pinch any seams tightly closed. The intention is that the artichoke will steam in its own juices, but it won't work if you spring a leak! Set the artichoke in a baking dish and bake for about an hour. When it's done, a knife should go through the base of the artichoke with no resistance, much like a baked potato. 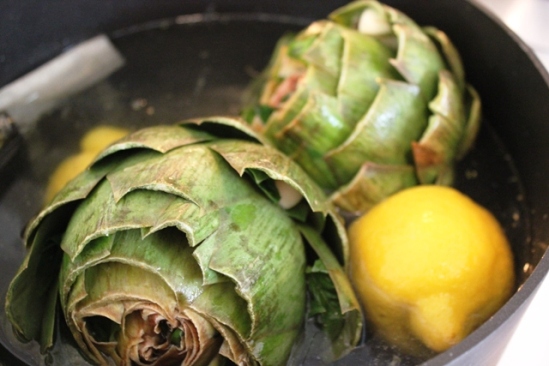 Since many of our seasonings are going to disperse into the water (like salt, pepper and lemon juice), I decided it was only fair to supplement the water with a few of our seasonings to level the playing field. Seasoning the water is typical in boiled artichoke recipes. Here's what I did:

Fill a large pot with enough water to cover the artichoke. Add two tablespoons of salt and a sachet containing one tablespoon of whole black peppercorns to the water. (I used a teabag to make mine, but a coffee filter or cheesecloth would work as well, just tie or staple it closed.) Also add the rind from the 1/2 lemon you squeezed over the artichoke earlier (if you're cooking more than one artichoke add a lemon rind for each one). Add the artichoke to the water and weigh it down by using a heatproof lid, dish or bowl (artichokes float). Cover the pot and bring to a medium boil. Boil gently for about 20 minutes. The artichoke is done when a knife inserted into the base meets no resistance, much like a baked potato. Drain upside-down for a few minutes before serving. 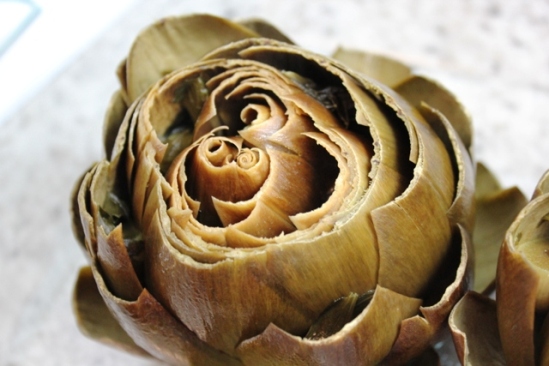 In a large pot, bring several inches of water to a boil. Put artichoke in a steamer basket and suspend over the boiling water. Cover and reduce heat to a simmer. Steam for about 25 minutes. The artichoke is done when a knife inserted into the base meets no resistance, much like a baked potato. Avoid checking too early or often for doneness. Each time the lid is removed, steam and heat escape and have to slowly build up again, which can significantly increase your cooking time.

There are four key elements in determining which cooking method produced the best quality artichoke:

1. Texture.
Dehydration is the enemy of the artichoke! Even a small loss of moisture can cause what should be a delicious leaf base to become leathery and inedible (or largely so). If you've ever dug into an artichoke and found that the first few layers of leaves have little or no meat, that artichoke was victim to dehydration. Even when shopping for a raw artichoke, you look for one that seems heavy for its size; that means that you're looking for one still plump with its own juices and not dried out! 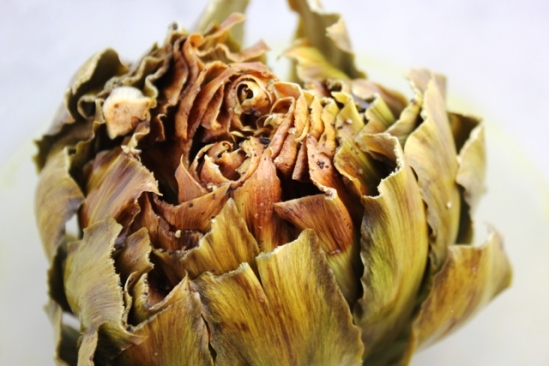 2. Flavor. I looked specifically at how well the flavor of the seasoning came through, as well as the natural flavor of the artichoke.

3. Ease of cooking. I compared cooking methods and gave preference to the easier, faster, and more foolproof.

4. Preventing oil smoke. Extra virgin olive oil has a relatively low smoke point compared to other oils. It's commonly used to season artichokes because of its flavor and Italian flare, but it poses a problem at higher temperatures. An obvious alternative might be to use more durable oil, like canola, or no oil at all, but it's such a ubiquitous seasoning tool in artichoke recipes -- baked, boiled, or steamed -- that I thought it was important to include it as part of the test. Will it hold up under all three cooking methods, or will it smoke and add off-flavors and smoky color to the artichokes? Can you guess which artichoke heart suffered smoke damage? Yeah. The black one.

To sum up, the best artichoke is one that retains its moisture, has great flavor, is easy to cook and doesn't succumb to smoky off-notes from overheated olive oil. In this contest, the winner is clear: BOILING!!

1. Boiling did the best job of preventing dehydration. The creamy texture of the boiled artichoke heart was sheer bliss, and the amount of soft edible meat was the highest of the three. 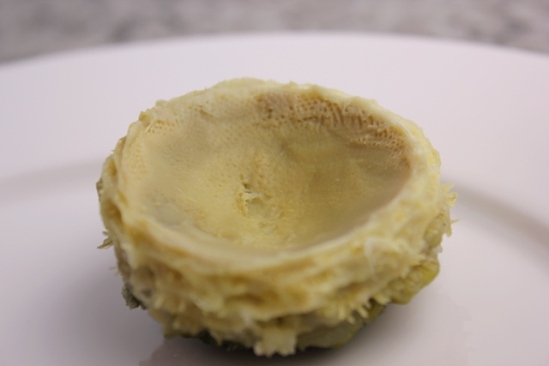 2. When it came to flavor, the boiled artichoke did not disappoint, though the flavor of the seasonings did not come through as strongly as they did in the other two versions. I enjoyed that the natural artichoke was the star of the show, and I thought my seasonings, though light, added a nice touch of savory garlic and lemony brightness. This loss of flavor is the boiling method's biggest weakness, but it still tasted great, and a more aggressive seasoning method could easily compensate.

3. Boiling was the clear winner in ease of cooking. Its cooking time was short and low maintenance. The large volume of water kept the temperature constant, so it was no big deal if I opened the lid to check on their progress from time to time. The hardest part was finding something to keep the artichoke submerged!

4. There were no issues from smoking olive oil, nor would there ever be with this cooking method. Boiling water has a maximum temperature of 212F, which is well below the smoke point of extra virgin olive oil. That's good insurance.

Steaming takes a comfortable second place. The steamed artichoke lost a bit more moisture than the boiled version, which meant there were a few more leathery leaves, and the heart was slightly less plump and creamy. The steamed version did have slightly more flavor from the seasonings, although the natural artichoke flavor was still the star of the show. Although steaming takes about the same amount of time as boiling, it's not as foolproof. If the lid is removed during cooking (for example, to check for doneness), heat and steam escape. Once you replace the lid, it takes a long time for them to rebuild, which can significantly increase your cooking time. The worst part is that it's almost impossible to guess by how much, so you're likely to open the lid too early again and have to wait for the steam and heat to rebuild again. As far as smoke goes, you're not in the clear by steaming. Unlike boiling water, steam's temperature doesn't cap off. In fact, steam can get hot enough to cause oil to smoke. In one of my earlier trials, I tried steaming directly in a few inches of water, without a steamer basket. The artichoke looked fine on the outside, but once I got to the inner leaves and heart, they were all dark and smoky from the overheated oil. So it is possible to smoke your oil using steam. However, if you use a steamer basket and reduce your heat to a simmer as I recommend, smoke shouldn't be an issue.

Baking comes in at a distant third place. The baked artichoke lost significant moisture; most of the outer leaves were leathery and the heart was small in comparison to the steamed and boiled versions. The flavor was really interesting though! My seasonings came through concentrated and zesty. The punch of acidity from the lemon was fun, but the seasonings really overpowered the natural artichoke flavor. Cooking them this way was low-maintenance, but it took about twice as long as the other methods. Now for the nail in the coffin, here is the baking method's greatest flaw: the high temperatures of the oven cause serious smoking damage. The artichoke came out dark and had noticeable off-notes from the oil that were difficult to overlook.

So don't be embarrassed to admit you boil your artichokes! I know boiling isn't always the "coolest" way to cook your vegetables, but when it comes time to eat your artichokes, you'll be glad you did.

More:
vegetablesfood scienceside dishesRecipescooking how to
Newsletter Sign Up
An essential daily guide to achieving the good life
Subscribe to our lifestyle email.
Successfully Subscribed!
Realness delivered to your inbox