We all know what it's like to suffer through a first date -- the canned conversation, awkward good night hug/kiss, forced laughter.

Rather than endure all that alone, like most of us, artist and programmer Lauren McCarthy has hired a team of anonymous online strangers to help her through the awkwardness.

That might sound like a nightmare to most people. But to McCarthy, who says "meeting new people is the #1 thing that terrifies me," this flirting by committee has offered some comfort -- and if not true love, then at least the chance to understand whether unbiased third-party "monitors" could navigate a social situation better than the people engaged in it.

For a project she dubbed "Social Turkers," McCarthy devised a way to broadcast live video of herself while out on a series of dates, a feed she streamed for an audience on Amazon Mechanical Turk that she paid to watch her interactions. McCarthy asked her dating coaches to offer feedback on what she should do, say or ask, which McCarthy immediately received via text message and then acted on. Suggestions included commands to "smile," "disagree," or make an advance, as well as conversation topics (two favorites: "'Abra-kadabra, I'm visible again" and "All the creatures of the sea love you Charlie"). 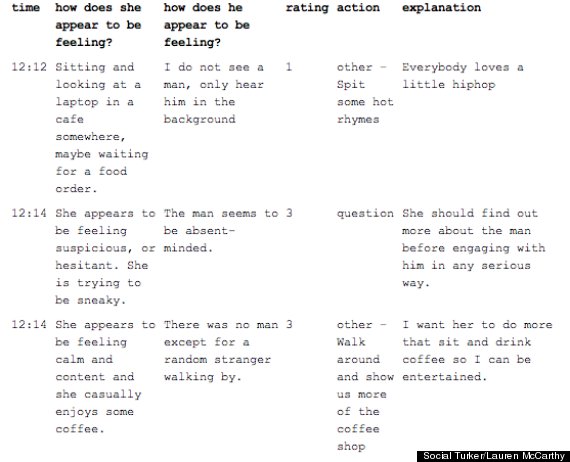 A screenshot of feedback from McCarthy's dating "assistants."

A growing number of us are walking around with virtual assistants in our pockets. But harnessing assistance from a team of humans, with their sense of humor, empathy and read on body language, is at once quaint -- humans?? In the algorithm age? -- and completely futuristic.

When we're out on the date of the future, who's to say we won't have virtual or human assistants constantly calibrating what we should do next for optimal results? McCarthy, for her part, is already working on developing an app that will let other daters take advantage of her technology. And, as I wrote earlier this week, couples are currently tracking their orgasms, weight, moods and foods in their quest for romantic bliss.

Given that it seems reasonable to expect that technology will continue to boss us around in increasingly powerful ways, we might be able to learn a thing or two about what's in store for us from McCarthy's own dating experiment.

In her logs for the Social Turkers project, McCarthy writes that the monitors got her to leave her comfort zone and didn't restrict her so much as they made her "aware of how many limitations I normally have."

Being bossed around by unseen assistants isn't so bad, it seems.

"[O]once I let go of the control I thought I needed, many of the cues from the workers pushed me to step outside my own normal boundaries and allowed me to interact and connect with people in ways I hadn't dared myself to explore before," McCarthy wrote in an email to The Huffington Post. "Also in doing this experiment, I refrained from filtering my dates or going in [with] preconceptions. I left the direction of the date up to the workers, and this often created moments that were completely unexpected and freeing."

McCarthy also quickly started to depend on and even take comfort in her unseen guides.

"For me, the gaze of the workers seems to provide company and comfort," McCarthy noted in a blog post. During the course of a particularly awkward date, during which advice from the Mechanical Turk volunteers was more sparse than usual, she observed, "I suddenly feel very alone ... I hadn't realized how much I had begun to rely on this system for a sense of security and as a guide for my actions and words."

But while McCarthy got her cues from humans, a source of "artificial artificial intelligence," in her words, most of us are so far hearing from just artificial intelligence -- full stop. Can software provide the same comfort or solace? Will we ever trust it as much, or find it as friendly? A recent survey found that 57 percent of cellphone users felt a personal connection with their virtual assistants.

"I originally thought about this project in terms of writing software, but realized leveraging this existing [Mechanical Turk] system with real people might be even more interesting and accurate," McCarthy wrote in an email. "Knowing the directions sent to me came from people made me feel less like a robot and more like a networked human, connected to a community of objective observers."