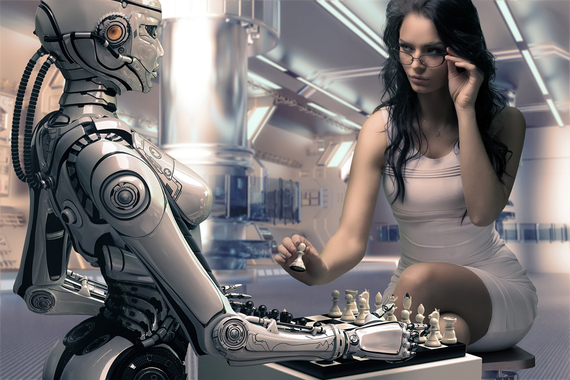 Bill Gates, Stephen Hawking and Elon Musk first warned us about Artificial Intelligence (AI). Elon Musk then turned around and with other technologists put $1B into starting a nonprofit research effort - OpenAI just to "keep an eye on it"! Facebook, Google, Amazon, Nvidia, Shopify and others are charging full steam at AI and even open sourcing it! So what is all the AI ruckus about?

AI has been subject matter for science fiction for a long time now. Every SciFi show you can think of has a intelligent computer or robot as a sidekick or with some prominent role. It has also been somewhat prominent in scientific research with the subject being formally founded in 1956 at a conference. Today as many as 378 different scientific journals accept and publish papers on AI and related areas from nearly 100K researchers.

In the past few decades we have had gradually more frequent news of AI being applied within various technologies to actually solve real world challenges. In the more recent past we have started to hear about "Deep Learning"! Just listen to Venture Capitalist Amit Karp wax eloquent about how this is a paradigm shift in the way AI is built and used. Probably the biggest piece of news is AlphaGo (Google and DeepMind) taking on and beating the worlds best player Lee Sedol of a rather complex game called Go. 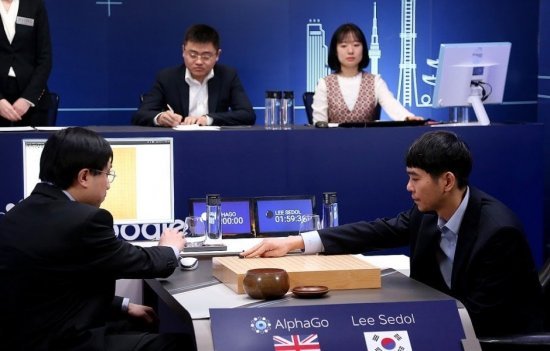 Source: GoGameGuru
This is not the same as IBM's Deep Blue playing World Chess Champion Garry Kasparov in 1997. This is different! AlphaGo learned how to improve its strategy while Deep Blue had every strategy explicitly programmed based on a search of a huge number of already played chess games. AlphaGo was self improvement while Deep Blue was pure machine brawn!

Voice and image recognition software have been vastly improved by applying Deep Learning. Your automatic photo groupings, your speech to text and even translation of speech to other languages is courtesy of advances in AI. Self driving cars and your Kinect game controller are also a consequence of AI. Many new areas like lung cancer and other medical diagnoses, big data modeling are now tractable challenges with Deep Learning. Here is a robot that taught itself how to pick things up in 10 days! Investor Nisa Amoils says that with things smart shelves, robot run hotels, and food service bots AI is already found roots! Here are many projected applications for this technology! Infact Google even opensourced its AI brain - TensorFlow so that anyone can develop applications with it.

So what is Deep Learning?

If you are trying to make a tough decision you might engage a number of advisers to help you. If you are wise you engage advisers who are experts on different aspects of the decision process and you consider each of their inputs, weigh them and hopefully come to the best possible decision given the specific premises or inputs you had to start with. Each adviser has become an expert in his or her area via learning, training and experience over the years! Imagine for a second that in order for each adviser to give you their input they in turn engage a number of advisers as well who are in turn experts in deeper aspects of the decision process. Each of their advisers pass their advice or input to your advisers who then give you advice. This works very similarly to the way brain cells or neurons communicate and hence the term neural net! In a deeper neural net many layers of experts are likely involved and help reach a better decision.

Deep Learning is exactly such a many layered set of trainable software modules. Each layer in turn takes inputs from the previous layer and deliver outputs to the next layer. Each module or layer's output is a consequence of having been "trained" which gives the module an ability to weigh specific factors in delivering the output. The construction of the different layers and the training of each will become specific to the problem being solved and the decision process for the solution.

Here is a fun video explanation:

One of the most powerful decision makers in the world - POTUS is NOT an expert on ALL the decisions to be made. Aren't we all glad POTUS has many advisers?!

However even Deep Learning has a very long way to go:
1.Each of the advisers or modules has only learned and trained so much. They are not infallible
2.More complex decisions and problems have many and complex aspects in the decision process and as a team the different layers of advisers or modules can be trained together only so much as the cases they have worked on together. In real life curve balls are the norm and "intelligence" is not merely about dealing with the known. It is most definitely about dealing with the unknown. This is the essence of scientific progress and even art - to step outside the known ... er box!
3.The scientific process is a matter of continuous questioning and improvement of the current base of knowledge. Will AI ever be able to ask questions ... that are worthwhile? Will it be able to step outside the confines of logical impasses and find answers to them? Will it be able to then incorporate those answers into ways to improve itself and become ever more intelligent like the human mind does?

Predictions that precisely such a thing will happen abound! Infact futurist Ray Kurzweil along with others has even suggested it will happen as soon as 2045.

Thus far it is somewhat evident that AI can be used to replace even complex skills such as game playing. Due to availability of enormous computational resources and big data analysis, tasks that require intelligence but would be too tenuous for a human can now be taken over by AI. Skill is essentially the ability to process stimuli and react appropriately very fast. When the amount of stimuli increases or the reaction time required decreases human abilities may not measure up. These situations that demand heightened skill are ripe for AI and Deep Learning!

However progress and power are a matter of stepping past even skill and changing the game altogether.

Already Deep Learning AI systems like AlphaGO can beat the best humans at games. However it is in undertakings like the creative process that stepping past mere skill can be examined. Creativity is often serendipitous recombination of skills and existing knowledge. It is a fitting of patterns from other areas of knowledge to push past barriers in some specific area of knowledge.

How soon before a deep learning system is trained to ask self improvement and other existential questions?

How soon before a deep learning system is trained to try and solve problems by sniffing outside the box?

Is it possible to teach AI to find first interesting questions and then their answers by bringing together existing knowledge and all known patterns for solution? I am going to have to say any human understanding can be deconstructed and translated into some kind of skill which an AI can take on! And thus even the illusive creative process can become an AI option. However just as many a creative idea has died for lack of subscription, so too can AI's creations ... unless we put our subscription and resources into the hands of AI.

Will AI found solutions be humanitarian?

At that point will we have already irrevocably committed our resources to the control of Deep Learning AI decisioning systems?

Currently, companies sees huge possibilities in AI for the sake of economy in terms of salaries, for competitive advantage, to build their business positioning and with the hope that it frees human intellect to take on ever more esoteric challenges. After all it is because most of us do not have to hunt or farm that we evolved into computer scientists. If we do not have to drive ourselves around or take phone calls perhaps we will have more time to colonize other planets or dream up impossible art! Will a veiled drive for profit or some other inadvertent maneuver compromise our control over AI?

We can stay in command of AI for as long as we control resources and value exchange in the future. However there is probably some minor chance that a self-improving AI will figure out how to wrest that control from us ... at some time in the future. Despite the many SciFi yarns to this effect, no dates have been proposed by anyone for something like that ... yet!

I hope to see both advances in AI that allow us to shoot for the stars but also perspicacity on our part to keep ourselves in the drivers's seat!

In the meanwhile here is a very entertaining and perhaps prescient SciFi story that Isaac Asimov himself rated as one of his best about "The Last Question" humanity ever asked ... of AI!