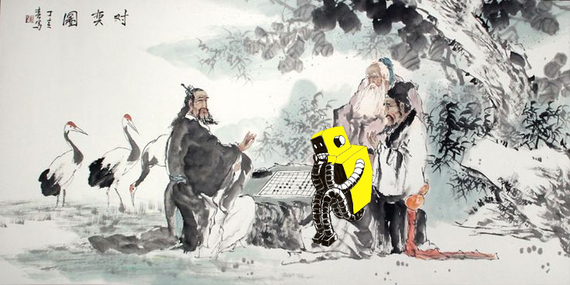 In classical Chinese painting, one sometimes sees distinguished figures in a mountain retreat, involved in "the four elegant pursuits." The first three are readily understandable: painting, music, and calligraphy. The fourth is a surprise: the game of Go. Seeing these paintings, it seemed most odd to include a board game in this pantheon of pursuits. But then I realized there was something quintessentially human about the game. Computers simply couldn't do it. In 1996 an IBM chess program, Deep Blue, beat the then reigning human champion. Its programs were designed by expert chess players, whose algorithms, pared with the computer's vast calculating powers, produced an unbeatable competitor. 20 years later, no computer program could play Go as well as decent amateur. Until last week.

Go, a 2,500-year-old game, requires players to encircle the opponent's pieces with pieces of the opposing color. It presents more board configurations than atoms in the universe. Brute force computational power won't work, and the problem has vexed computer scientists for decades. A team of researchers at Google have created a computer program, AlphaGo, to defeat a human champion at the game. It is a historic step forward, and could represent a major breakthrough in the evolution of artificial intelligence--or sound the alarm for many. What is striking about AlphaGo is that the computer actually learned to play. Unlike Deep Blue and the other chess programs, no expert player supplied algorithms. The computer simply analyzed millions of moves in professional level games and figured out for itself what configurations improved the chances of victory. Once it learned to play at a professional level, it played thousands of games against itself. It learned from those games how to improve its skills even further.

We are used to the idea that computers can do all manner of computational tasks faster and more accurately than humans. We understand that certain tasks, like recognizing faces, are pretty simple for humans, but difficult for computers. And we are now seeing computers reaching an almost human level at executing such tasks. But the common denominator is that humans are instructing the computer to do something the humans know how to do.

The Go program has potentially shifted that paradigm: it is teaching itself how to do something at a level that humans haven't figured out. This is the hallmark of true artificial intelligence. In this historic moment, many are skeptical, if not outright afraid of what is next. Remarkable innovations like AlphaGo scare enough people that there is a legitimate debate about whether the risks of artificial intelligence could outweigh the rewards.

Techno-pessimists believe that the survival of the human species will face an existential threat as AI advances dramatically. Each year AI's cognitive speed and power doubles -- ours does not. It may sound like science fiction, but machines are learning rapidly, as Google's Go program demonstrates. Once AI advances to the level of human intelligence, author James Barrat argues it may well develop survival drives similar to our own. When it exceeds our intelligence, as Barrat explains in his book Our Final Invention, it may be subject to no constraints at all.

On a less theoretical level, there is real concern that AI will destroy more jobs than it creates. Already, such repetitive tasks as reading radiology images can be done better by computers than by well trained human operators. Doctors diagnosing medical conditions, particularly unusual ones, might well find themselves competing with computers. Indeed, almost anyone doing repetitive tasks, even those that currently require advanced education and a high level of cognitive ability, might find their jobs under threat. Jaron Lanier, widely known as the father of virtual reality, makes this argument. Another concern is that as AI begins to drive cars, fly drones, and operate weapon systems, cyber-attacks will have the potential to create the most dire consequences.

On the other hand, techno-optimists like Martine Rothblatt, the author of Virtually Human and creator of BINA48, one of the world's most advanced social robots, envisage a golden age powered by Artificial Intelligence. AI leverages developments in robotics, big data, sensory devices, and genetics. Diseases are eradicated, the blind see, the deaf hear. Drudgery is eliminated from the workplace. Ultimately, humankind will merge with its machines, and this process will yield the best features of biological and electrical systems. Arguably, these developments will drive the advancement of the human species.

This debate has only just begun.

If I might end on a shameless note in my role as Chairman of Intelligence Squared U.S., the debate will continue in real life on March 9th in New York. Check the iq2us.org website for details. Or, on second thought, ask Siri to do it for you.