In what's being called a win-win for the environment and the production of renewable energy, researchers at Lawrence Berkeley National Laboratory and the University of California, Berkeley, have achieved a major breakthrough in artificial photosynthesis.

The scientists have created a system that can capture carbon dioxide emissions before they're released into the atmosphere and convert them into fuels, pharmaceuticals, plastics, and other valuable products.

Too much gas. Carbon dioxide is the principal greenhouse gas produced by the burning of fossil fuels and has been identified as a major contributor to rising global temperatures.

"Our system has the potential to fundamentally change the chemical and oil industry in that we can produce chemicals and fuels in a totally renewable way, rather than extracting them from deep below the ground," Dr. Peidong Yang, a chemist with the materials sciences division at Berkeley Lab and one of the researchers behind the breakthrough, said in a written statement. 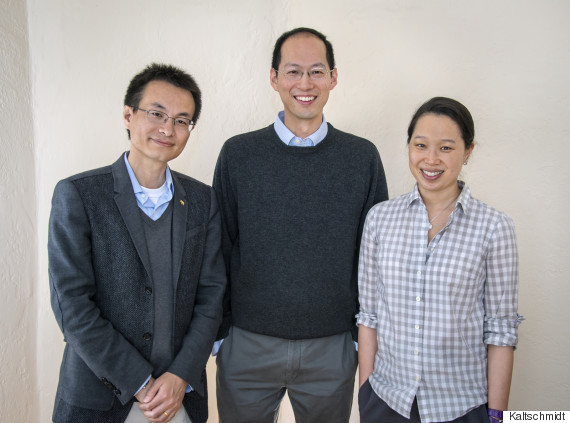 Scientists around the world have spent decades looking for a practical way to mimic photosynthesis. That's the process in which green plants use energy from sunlight to convert water and carbon dioxide into oxygen and carbohydrates. But it's proven to be a difficult technical challenge.

"The real issue comes from the balance of energy efficiency, cost, and stability, Dr. Amanda J. Morris, assistant professor of chemistry at Virginia Tech in Blacksburg and an expert in sustainable energy, told The Huffington Post in an email. "Electrons, which are required, are very expensive (either produced from gasoline, oil, coal or solar) and so, the process must be very efficient in terms of electron and energy balances."

Morris, who was not involved in the new research, called it "important," adding that it would guide future efforts in the field.

Biology-nanotechnology mash-up. The heart of the new system is an array of minute silicon and titanium oxide wires studded with Sporomusa ovata bacteria. The "nanowires" capture light energy and deliver it the bacteria, which convert carbon dioxide in the air into acetate (a key building block for the more complex organic molecules in fuels, biodegradable plastics, and pharmaceuticals).

(Story continues below diagram--click to enlarge.) 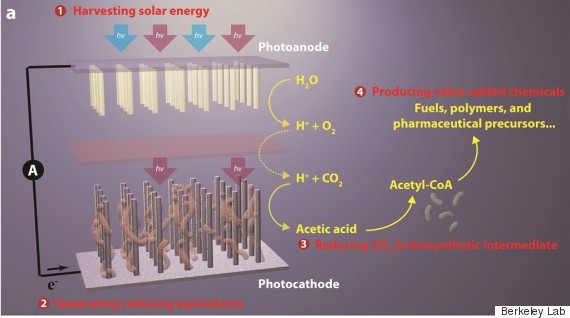 That could take awhile. Morris told HuffPost Science that "a device based on this technology will not hit the market anytime soon."

A paper describing the breakthrough was published online April 7, 2015 in the journal Nano Letters.