When Michael and Barbara Fouch first considered replacing their grassy lawn with artificial turf, they researched the growing array of options for the green plastic blades and the infill that holds them in place. They wanted a product that looked nice, but they also wanted something that wouldn't make any people or pets sick.

"Everyone here is pretty concerned about curb appeal," said Michael Fouch, 62, of Laguna Niguel, California. "Last summer, with the dry and sunny weather, the grass was getting brown and diseased."

Two weeks ago, the Fouches swapped out their water-guzzling grass for a plastic substitute designed to simulate water-quenched natural turf, saving about $1,000 in rebates in the process. They specifically chose an artificial lawn that had no infill made from crumb rubber, a controversial ingredient that may carry health risks.

Homeowners, schools and municipalities, especially in the often-parched Southwest, are increasingly removing natural grass from yards, sports fields and parks, with many opting to install synthetic grass instead. In California, where drought has led to a severe water shortage, the turf swappers are also motivated by generous city and county rebates.

But there is mounting concern over potential environmental and health hazards posed by the artificial alternative: from climate change impacts, to simple injuries like burns, to potential safety concerns about the chemicals, many of them carcinogens, found in infill. As this drought-resistant solution grows more popular, the debate has only intensified.

Landscape irrigation is estimated to account for nearly one-third of residential water use in the U.S., totaling nearly 9 billion gallons per day. In some regions, outdoor water use can account for up to 70 percent of a family's water consumption, according to Alice Webb-Cole, an expert with the Metropolitan Water District of Southern California's turf removal program.

"We think that turf removal is the best thing people can be doing right now," said Webb-Cole. She noted that rebates for removing natural grass in Southern California range from $1 to $2 per square foot for residential, commercial and public properties.

Victor Lanfranco, co-owner of the Synthetic Grass Warehouse, has seen the shift in public preference. His company, the largest artificial grass provider in the U.S., currently has four months of back orders. The industry has grown by some 50 percent this year, he said, "catapulted by the drought."

To reduce water usage, Webb-Cole's agency points Southern California residents toward options for drought-resistant plants to fill their yards. Still, many people prefer the look and feel of a grassy lawn, even if it's fake. Either route qualifies for rebates -- although the fake turf choice may come with consequences.

In recent months, some U.S. school districts discontinued construction of new artificial fields due to public outcry. The laying of artificial fields even sparked protests last week in Edmonds, Washington. And legislation to place a moratorium on artificial turf with rubber infill and to launch a rigorous study of the safety of crumb rubber was pushed, and then voted down in May, in the California Senate.

Much of the rising public concern has been driven by the efforts of Amy Griffin, a college soccer coach in Seattle who sparked a national conversation with her suspicions about the number of current and former soccer goalkeepers who had developed blood and other rare cancers. All the keepers had played on artificial turf infilled with recycled rubber tire crumbs. Rubber tires, according to the Environmental Protection Agency, can contain heavy metals, polycyclic aromatic hydrocarbons, carbon black and other known cancer-causing chemicals.

Griffin and other skeptics argue that not enough independent research has been done on the risks for those who make frequent contact with the turf, breathing in gases released from a hot field, ingesting the rubber particles and getting abrasions from the turf that can leave skin open to rubber particulate. They've expressed particular worry about children, who may not always adhere to stringent hygienic practices -- like not putting their hands, or even the black bits, in their mouths while on the turf and washing their hands after playing. Griffin keeps an informal list of soccer players who played on artificial turf and later battled cancer. Several of them recalled to HuffPost how they would track the black bits home from practices and games, and sometimes find them in their mouths and eyes.

"My fear is that most cancers require years of exposure and time to develop," said Dr. Barry Boyd, a medical oncologist with Yale New Haven Health. "Whatever exposure we have now, the adverse effects may not be seen for 20 years."

Echoing this sentiment, Elliot Kaye, chairman of the Consumer Product Safety Commission, said in May that a 2008 statement from the CPSC claiming that its staff had found “synthetic turf fields ok to install, ok to play on” was inaccurate.

“Safe to play on means something to parents that I don’t think we intended to convey, and I don't think we should have conveyed,” Kaye said at a May 19 congressional hearing, noting that a "political effort at the time" was behind that 2008 statement. The CPSC had based its assessment on samples from a small number of fields and only evaluated potential exposures to lead. Kaye further suggested that more thorough research needs to be done, especially on the potential hazards of crumb rubber.

The Fouches have a son, a former goalkeeper, who was diagnosed with Hodgkin's lymphoma at the age of 19 (he's now 27 and cancer-free). While no connection has yet to be proven between crumb rubber exposure and cancer -- chemical exposure is not on the list of risk factors for Hodgkin's lymphoma and the late teen years are a common age of onset for the disease -- his parents said they didn't want to take any chances.

The Synthetic Turf Council, an industry group, continues to insist on the product's safety. Artificial turf may even eliminate exposures to other harmful chemicals commonly applied to natural grass, according to Lanfranco, the artificial turf distributor.

It is true that some natural lawns receive 10 or more pesticide applications per season. Among the most commonly used pesticide products is Monsanto's Roundup, which is being scrutinized for potential toxicity. The World Health Organization determined in March that glyphosate, Roundup's key ingredient, has the potential to cause cancer.

The problems with artificial turf don't end with the type of infill used. Plastic grass heats up faster than its natural counterpart, causing heat-related injuries and worsening environmental concerns.

"Artificial turf acts and behaves like any other paved surface," explained Ronald Macfarlane, a public health manager for Toronto and lead author of an assessment of fake grass published by the city in April. "It gets very hot in the sun. People can get blisters and burns."

Elevated temperatures can also increase the rate at which toxic chemicals, such as benzothiozole and toluene, are released from some artificial fields into the surrounding air.

The heat factor has led manufacturers to recommend that customers water their artificial turf on sunny days to keep it cool -- thereby negating some of the water savings. (They also advise spraying with water to clean off dog poop and other materials that inevitably land on a lawn.)

But Macfarlane said the environmental risks don't end there: Just like the concrete of a city, artificial turf can raise local air temperatures by several degrees. In addition, while artificial turf is perforated, water typically doesn't penetrate as fast as it would through natural ground cover. The result, according to Macfarlane, could be less water absorbed into watersheds and more localized flooding.

"Widespread use of artificial turf would really have an impact on how well we would be able to respond to the more extreme heat we are expecting with climate change, as well as more extreme weather events," he said.

What's more, said Macfarlane, additional installations of the stuff may even contribute incrementally to climate change. Plants, lawns and other natural landscapes take in carbon dioxide and release oxygen. The plastic and other manmade components of fake grass don't provide the same greenhouse gas storage or air-purifying services.

Given all the knowns and unknowns, experts generally agree that use of artificial turf should be reserved for situations in which no other options are practical. On the one hand, Macfarlane said, "You have to weigh taking away opportunities for physical activity." On the other, he said, "Having an artificial turf to look like you have a green lawn is not necessarily the best. It has no health benefit."

"When there are natural ways of landscaping available, they should be looked at and preference given to those where they are viable," he added.

Don Shor, a retail nurseryman in Davis, California, sees any increase in use of drought-resistant plants as one silver lining to his state's water shortage. "I'm really happy when I see people kill their lawn and put in low-water plants," he said. "They are turning their old boring green lawns into pretty gardens and reducing their long-term water use."

"There are lots and lots of plants to choose from," he added, recommending that people check with local arboretums for ideas of what might grow best in their region. "Many plants draw hummingbirds, dragonflies and bees. Many give food." 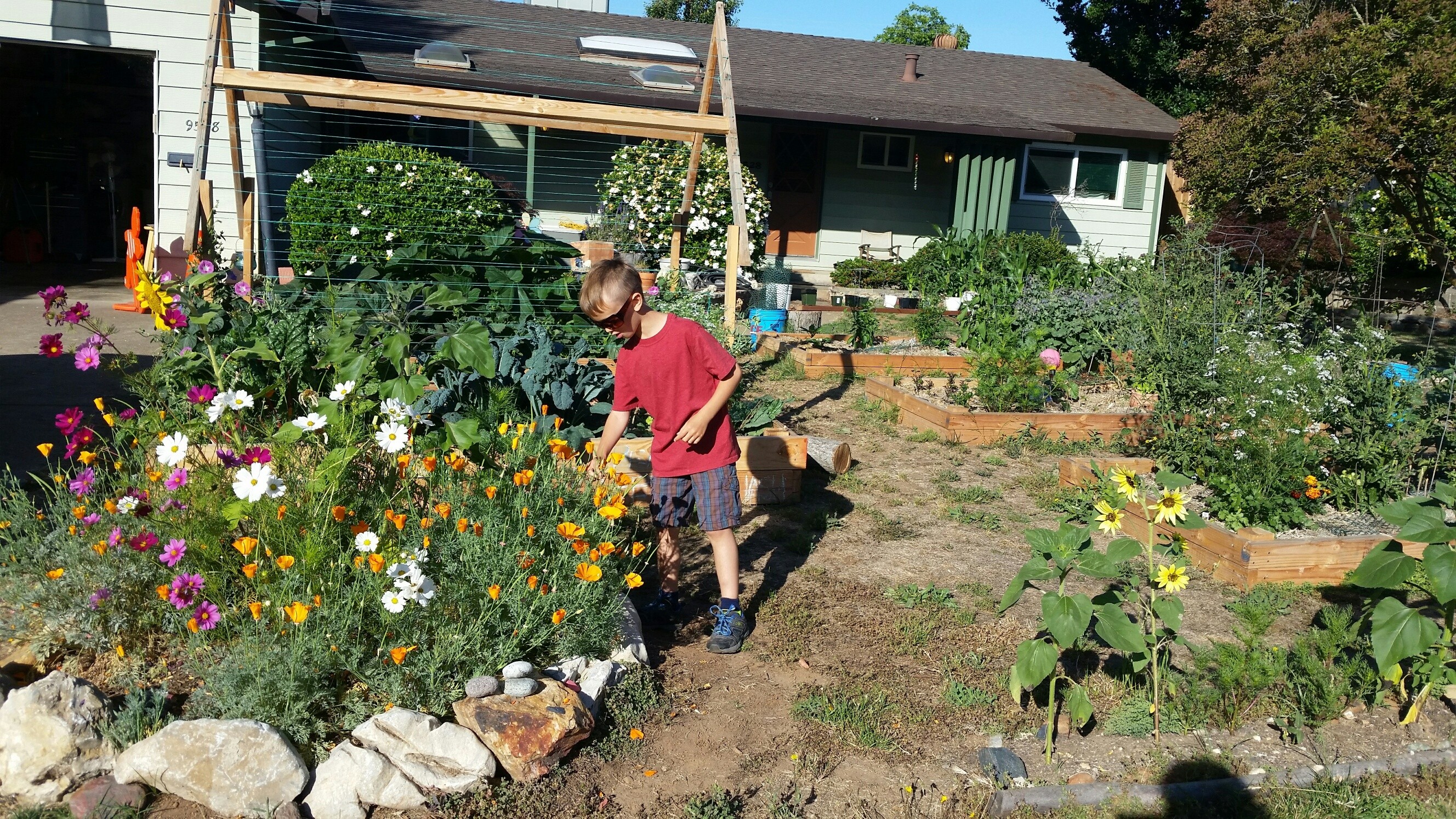 Last summer, as the California sun baked her front lawn a golden brown, Tamara Webb let it go without water. This spring, rather than nursing the grass back to green, she and her husband took the same step as the Fouches: They tore it out. But what they chose to put in its place differed significantly. Five vegetable garden beds, a flower-filled rock garden and several rows of corn and sunflowers now color their yard.

"It's brought me and the kids outside," said Webb, 37, of Orangevale, California. "My 5-year-old now grazes in the garden. He picks borage flowers and gives them to people walking by."

Webb noted that the blue borage flowers shared by her son are not only beautiful but also edible. "They taste like cucumbers," she said.