They never said being a mother was easy. They never said being an artist was easy either. "They," whoever that may be, never said being a woman was easy. And while being a woman may never be an effortless undertaking, it could and should be one of equality. In retrospect, we are graced with individuals who dedicate themselves to pushing through any deplorable barriers of equality, virtue, passion and basic human rights. From this progressive movement and our ever-evolving culture, creative forces are high, especially in women and mothers. We can see see an incremental change in successful female artists and in matriarch entrepreneurs who manage a domain that was once, not long ago, predominantly granted to males. While it seems women must have this certain zeal and tenacity to get to the crest of triumph, as a culture, many are beginning to work with a much more unapologetic demeanor. And for the sake of humanity, women are able to embrace their sincerely unapologetic selves.

Enter Japan born, inherently British, New York City dwelling artist, Amanda Dow Thompson, whose hand-carved sculptures are sexually liberating, awe-inspiring, significant dents in the female movement. With teenage twin girls in tow, Thompson explores motherhood and the art of passing along viable facts and realities of being a female in this culture. In saying this, Thompson's artwork plays a large role in this type of communication and deliverance. Typical mediums include wood, steel and resin, not to mention hardware and commanding resilient strength. In her new series, each piece is crafted from a single slab of lumber. Thompson's intriguing, detailed and visceral sculptures are odes to female strength and capability. Their form, brazen yet inviting, offer a 360 degree perspective, working with wood, depth, negative space and shadows. In crafting such intense work with methods that could suggest "danger," she breaks the barrier of what cliched machinery women are capable of handling. As stated by Thompson, these pieces are an ode to peeling back an inner strength that may have been hidden before, and that may be hidden in women as a whole. One can also find suggestively phallic sculptures as pieces which narrate an abstract tale of gender inequality and the juxtaposition of sexuality within.

"I identify with the twisting, stretching, spinning forms in that they represent a level of discomfort with my place in the world. My pieces convey the notion of isolation, of feeling separate. And this speaks both to my having literally been a foreigner for the majority of my adult life, and as a woman, having felt as if I had to moderate or inhibit myself and my voice to some extent. Strength and independence have not always been assets. I have suffered from anorexia, depression and I have been sexually assaulted. At times, I have felt very close to the edge- stretched, twisted, curled up, unraveled or falling apart. On the other hand, I am strong, independent and opinionated, and in love with life." 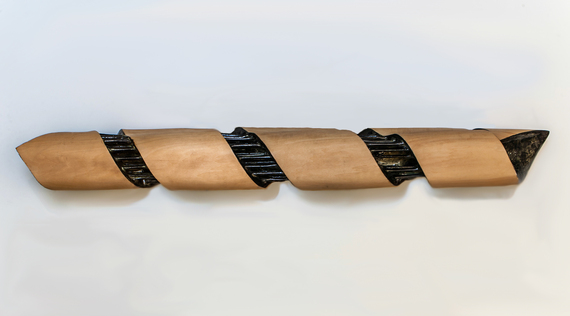 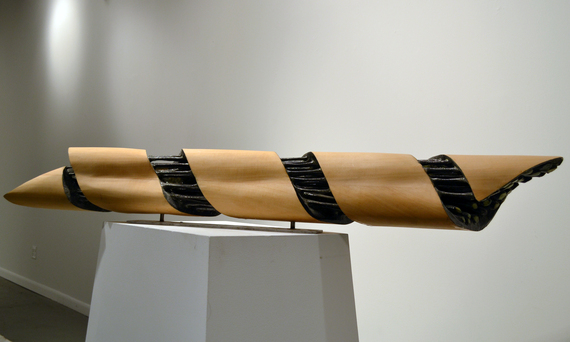 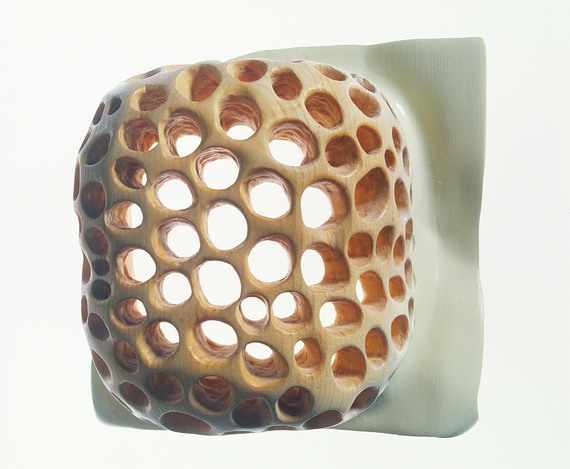 While many of Thompson's pieces are a stark portrayal of strength and beauty, it is also this fragmented and warped shape that adds not only an organic element, but creates detail in shadows symbolizing growth and possibility. A ghost-like, intermittently vacant backbone often masks a sturdy interior in some pieces, revealing what looks like bars or metal. One could take this as a metaphor. Other pieces hang stagnant in the air, directing light and attention as if completely in charge of their surroundings. The technique of her more recent pieces, in her series Slippery When Wet, exemplifies a headway into a more candid self. For what began as delicate, perceptibly feminine sculptures swiftly evolved into the unabashed, determined work we have today. 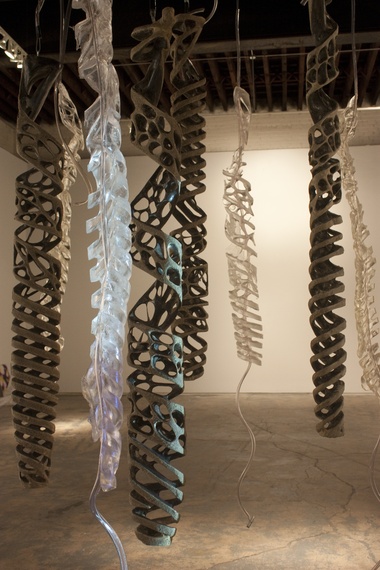 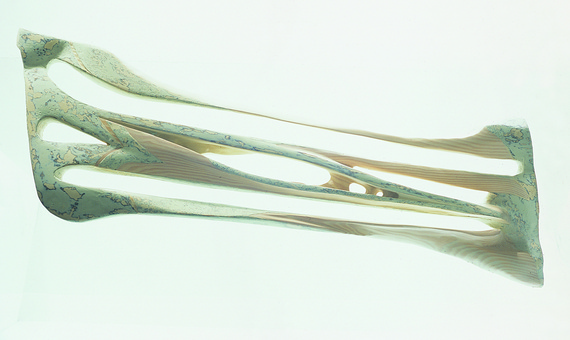 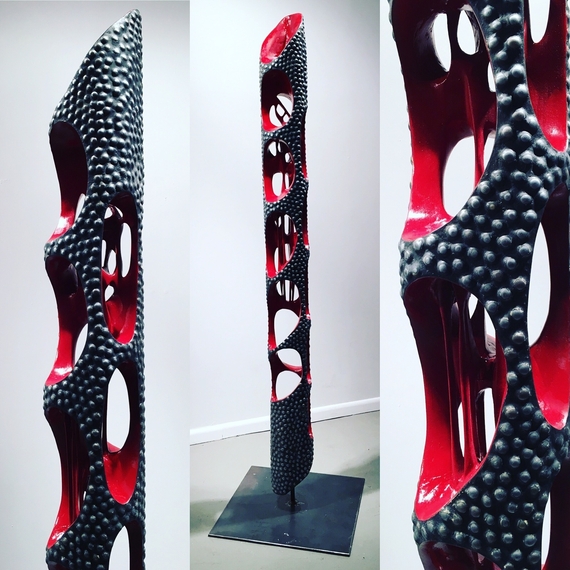 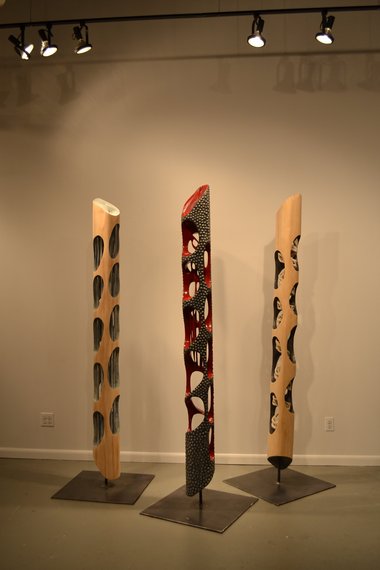 "My newer work, though still playing with some of the same shapes, is more robust, more solid, larger in scale," Thompson comments. "At the same time, pieces are moving away from the wall to the middle of the room, landing on their own feet. The new work is unapologetic, it symbolizes a breaking out of inhibition. Giant Crimson phalluses adorned with metal, say 'here I am, I'm strong, I'm sensual, I'm in this."

In pieces such as Beholden, there is a specific target marked. "It is a comment on beauty standards, referencing the fascisti symbol as way of commenting on the narrow standards the media and fashion industry adhere to- young, white, thin. The title is a play on the phrase, 'In the eye of the beholder', collating with 'to be beholden, to be a trophy or a belonging'." 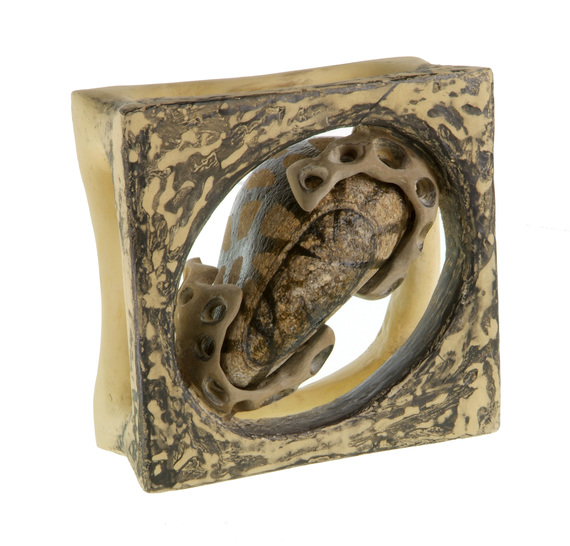 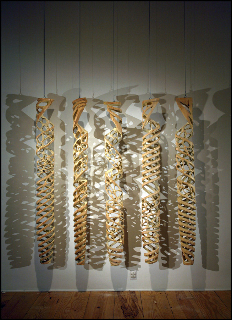