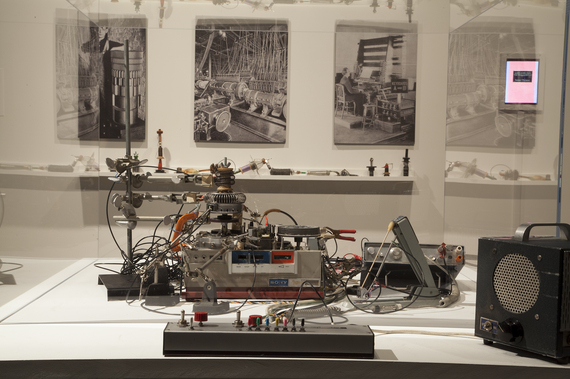 There is much to hear at "Aftersound: Frequency, Attack, Return," currently on display at Carnegie Mellon's Miller Gallery in Pittsburgh.

Sound represented as data. Sound captured on modern graphic illustrated scores. Giant medieval scores written in calligraphy. Sound captured by microphones in the pulse of a flame. Copper 'tongues' that act as resonators. A modern interpretation of a telharmonium, fashioned from an old VCR and household objects. And a theory of silence.

"Aftersound" explores the physical inducement and representation of sound by and for the senses. The exhibit positions artist as scientist, as alchemist, capturing human experience when sound waves become brain waves.

"The exhibition explores sound's infiltration into contemporary discussions of aural and visual culture, with a particular focus on sound visualization, the physics of sound, political uses of sound -- sonic warfare and DIY -- as well as the resurgence of neo-metaphysical experiments with sound as a portal to new sensory experiences," said Ragona.

"The themes and concepts of the exhibition have broad appeal across disciplines of music, art, and physics. These ideas have multiple points of entry that visitors experience through dynamic and interactive installations, graphic scores that visualize sound, live and site-specific performances and workshops," said Cox.

'Aftersound' is inextricably tied to the concept of an afterimage, according to composer and psychoacoustics pioneer Maryanne Amacher, whose "City-Links, 1967-1981" is included in the exhibit. She explored the idea that the tiny bones of the inner ear act as transducers, causing the head and, consequently, the body to continue to resonate once the actual sound had ceased to emit. This is similar to 'seeing' an image after it has been viewed under 'intense circumstances', such as strobe lights or direct sunlight.

The exhibit begins with a visual score from composer John Cage, who famously investigated silence in an anechoic chamber at Harvard University. While Cage did not experience silence per se, he did experience the high and low-pitched hums of his nervous and circulatory systems. Cage would go on to compose 4'33", a 1952 composition where musicians sat silently with their instruments, inviting the audience to listen to the sounds of their environment.

The sounds of "Aftersound" can be ethereal, harmonic or discordant.

The five copper 'tongues' attached to a wall in Sergei Tcherepnin's "Subharmonic Sparks (Five Copper Tongues)" demonstrate Amacher's theory. Two of the 'tongues' have transducers attached. When gently bent, these two tongues 'elicit a new composition'. The visitor is encouraged to explore the way sound manifests in the body and auditory system by gently bending the tongues and noting the effects.

"I think of them as Venus flytraps. They are quiet until you touch the tongue," said Tcherepnin. 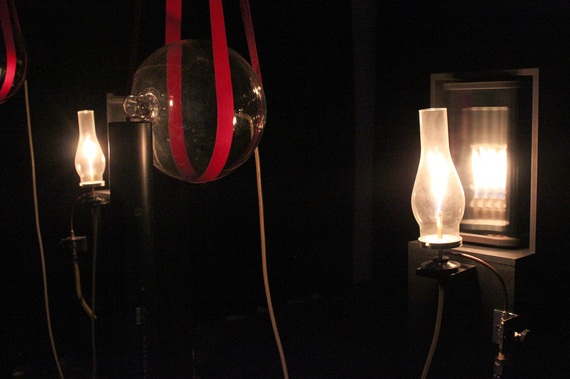 There is a mystical quality to "Helmholtz (DUO)" by Paul de Marinis, which brings to mind a darkened Victorian era performance hall. The piece is enveloped by a black curtain. Flames are accented by rotating mirrors. Glass spheres act as Helmholtz resonators. The flames vibrate when their pitch is present, allowing the viewer to visualize the shape of sound.

De Marinis was inspired by acoustic pioneers of ages past, including Herman Helmholtz, a Victorian era scientist who studied the acoustical properties of ancient Roman theaters and Rodolph Koenig who, in 1862, devised the manometric flame apparatus after becoming entranced with the way flames seemed to 'dance' during theatrical performances.

"IR Chorus", by Jesse Stiles of Pittsburgh, consists of a set of infrared sensors positioned above candles. The flames are converted into a varying voltage, which modulates a set of individually tuned oscillators. The resulting audio is ambient in nature. Stiles was inspired by a trip to India, where he witnessed a gaggle of telecommunications wires tacked to a tree and noted the drone-like music that emanated.

In "Folk-Telharmonium," Pittsburgh artist Michael Johnsen produces a machine that mimics a contemporary version of the Industrial era telharmonium designed by Thaddeus Cahill, audible on telephone earpieces. The original weighed nearly 200 tons, and produced sound in an era before generators and loudspeakers, via large rotating generators.

Johnsen's kitchen sink version uses a spinning wheel taken from an old Sony VCR and iron-rich objects from home -- a metal sink stopper, magnets, a thread spool, a piece of an old camera and steel wool. Induction coils pick up motion and produce sound currents. Individual toggle switches permit the visitor to isolate certain sounds. A master knob controls pitch. There is a vulnerability to the objects used.

"The sound passes through a spring in the stapler to add a reverb quality to the piece," explains Johnsen. "It's about scrounging a bit. Magnetism and electricity is something that still is fascinating to people. It's neglected in the present era," explains Johnsen, who also designs electronics for synthesizers. 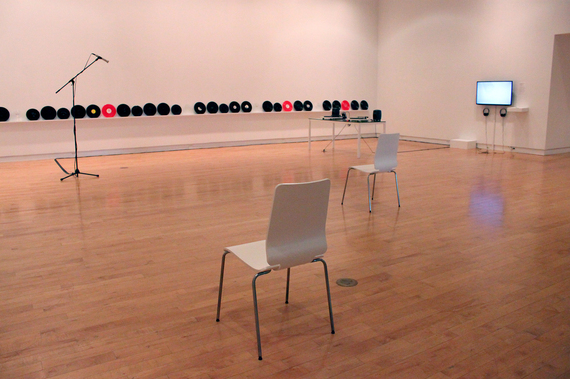 "Archive Machine," a collaborative work by Marina Rosenfeld and Caroline Record of Pittsburgh occupies the opposite wall. The software senses the dub plate playing and records the psychoacoustics of the room, which includes the voices and movement of visitors. It is possible to witness the deterioration of the dub plate onscreen before one's very eyes, and to feel a bit saddened by the temporal nature of it all. One can explore the 'attack' element of sound and corresponding political considerations. Who is included and who is excluded from a recording or discourse? The work also explores the artistic and performance considerations of silence, a la John Cage.

We live in a culture which tends to overemphasize seeing as knowing and regards sound, and information gleaned from the other senses, as secondary. "Aftersound" begs us to reconsider. The sounds of "Aftersound" are machine-like, but not unnatural -- the ambient soundtrack of a contemporary world -- a noise that, to us, may seem more like silence.

"Aftersound" will be on display until November 22. The gallery is located in the Purnell Center for the Arts on Carnegie Mellon University's Pittsburgh campus. Miller Gallery is open from 12-6pm Tuesday through Sunday. Admission is free. Read more about the exhibit at: www.cmu.edu/millergallery .