It is all too apt that James Franco should dedicate, in the metropolis that made gender-bending an art form, his latest multimedia exhibition made specifically for Peres Projects with the provocative title Gay Town.

The rabbit as a symbol of fertility and the spring of renewal. Gay Town's outpouring of id on the staid socialist Karl-Marx-Allee charges into a new era, not only for the Berlin arts scene but a universal expression free of political correctness surrounding gender labels.

Sexually sophisticated Berliners accepted Gay Town with open arms, while some expressed the art would benefit from the polymath setting his sights to the study of German!

This funhouse of an exhibition is actually one big installation that screams out the interconnections between the various expressions for which it strives to give form. Gay Town consisted of multimedia works completed specifically for this show which was timed for the ever-busy, ever-present Franco's red carpet appearances for his 2013 Berlinale triple play: Maladies, Interior. Leather Bar and Lovelace.

Transforming the vast emptiness of socialist Karl-Marx-Allee: Gay Town was in a temporary space across the wide boulevard from Peres Projects huge new space on Karl-Marx-Allee 82 that opened on March 1.

Inkjet prints on polycotton of tabloid articles articulated with the artist's crude hand markings -- either setting the record straight or expressing a reaction to the nonsense that is printed about him. Franco provides here the artifacts of performing Jackson Pollock pissing on celebrity itself. The authenticity in this pioneering and reckless form of art is sourced in a deep emotional need: to dispel the toxic dross of the 24/7 celebrity-obsessed corporate controlled entertainment media.

The resulting jumble of words and crude markings on painted and digital images is as energetically fierce and bold as it is chaotic.

Covering the entire wall space the literal interruption of text caused by the intentional overlapping of works screaming out for digging below the surfaces of this McCarthyesque phallic interventions into the closed circle of global entertainment media that typically operates outside of the realm of the art gallery.

Which is precisely what makes this exhibition notable. Moreover, what seems random on the surface shields the self-organizing systems of the artist's impulses. There is a certain underlying order in the four rooms of Gay Town that, under busy surfaces intent on penetrating the closed loop of the celebrity media cycle, provides insight into the very universality of the pioneering mission of this boundary-smashing iconoclast.

It comes in the form of a 21st century hero's journey, incorporating the Uncertainty Principle to examine the cinematic projection of universal archetypes entrapping the human in the toxicity of fame. 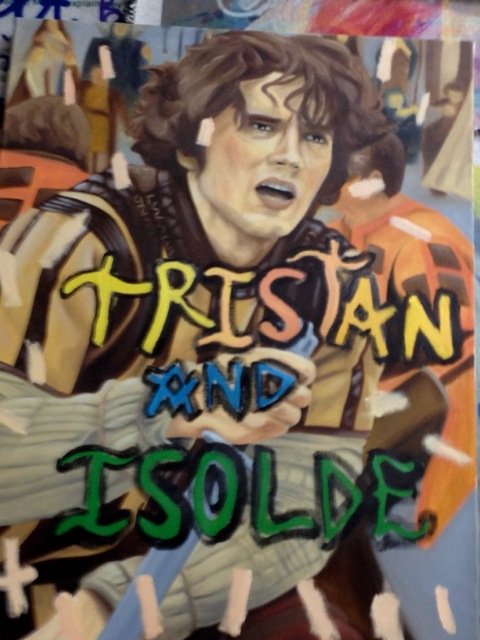 The legendary lovers Tristan and Isolde as the inner marriage, symbolized by the A as hexagram, universal symbol of the hieros gamos.

The wounded healer in 127 Hours.

Missing are direct references to James Dean, though the rebel is present everywhere; what seems in atrocious bad taste, "The Death of Natalie Wood" may well be a mourning for lost love.

The next room gets more personal with a large video installation... and yes, there is James Dean just above it.

"Franco/Rameriz" fuses of identities by way of a self-made digital marriage of image and prose. Photo courtesy of Peres Projects.

The artist dispels the soul-withering projections by way of intervention into the theft of his persona by the author of a book entitled Fucking James Franco. There a live breathing Ouroboric quality to this multichannel video installation, relayed in crude visuals mocking the vampirism of celebrity media by going one step lower on the common denominator scale.

And then, a hallway which contains a single work:

The Thinker's insight through the Other, in the form of what else but the celebrity media, leading to another room...

"Crystal Palace" heralds a fusion of prose and images, the marriage of secular and spiritual culminating in a marriage arrived at through an urban Garden of Eden of sorts...

... the Oz confrontation with the anima projected across the globe and personalized here...

It is here we experience the struggle to break out of the chasm of the narcissistic echo chamber evoked by the artist's prose competing with poetry in a hidden treasure.

Moving beyond the outward male gaze to the inner eye seeking integration. "Through the Fence" is a 49 minute loop of evocative ("'like a foam tipped water spent, she settles at last...") poetry read by the artist to the rhythm of vintage 8mm film of a couple's erotically charged dance hall performance cutting to footage of a single gymnast on a balance beam.

Nowhere in this exhibition is a label, an artist's statement, an essay. So a philosopher's mind wanders with the eye. Could it be that Gay Town takes us back to the original definition of gay, from the French gae that the German philosopherFriedrich Nietzsche adopted for The Gay Science (Die fröhliche Wissenschaft) referring to the French gae saber, the technical skill for writing poetry uniting singer, knight and free spirit?

The final gallery, replete with cow imagery, is a projection into the future -- the stability and connection with nature that comes with the internal integration, yes in the human heart, of gender opposites.

Circling around to bite the hand that feeds him, James Franco's Ouroboros opens up a dialogue bridging the largely separate mediums of art, film and literature -- intent on his collaborations to break through the systematic blockages by which the corporate controlled celebrity culture drowns out the authentic voices of art. 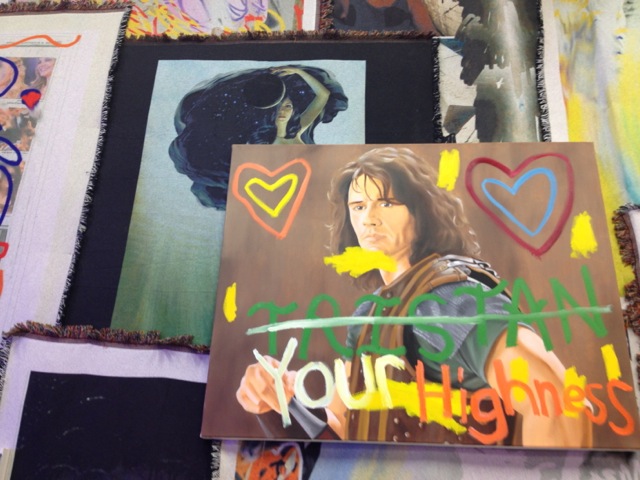 The artist's "altar" ego -- his self-portrait as Tristan with a red heart; the lover archetype that launched legions of fluttering-hearted fans.

In fact, what seems to be at work under Franco's surfaces is a new archetype that demands to be defined. Years ago, I tried to do so in a literary novel taking place in post-dictatorship Argentina, where gay people were charging out of the closet to be confronted with the dark specter of AIDS. The narrator's romantic quest in this frenzied gender shifting environment is summed up by her female companion:

... you want a man who looks gay but isn't gay, who is intellectual yet passionate, beautiful but not narcissistic, who has style but isn't superficial, who appears to be poor but has money and then -- of course -- he has to be responsible because you don't want to take responsibility for anyone but yourself!"

Yet, in this Ouroboric quest to shed cinematic identities to confront gay at its source, is the projection of a new archetype that, since 1933, has been struggling back into human form even as "gay science" was diminished to a sexual label.

Here we find the convergence justifying Franco's rush to engage the Uncertainty Principle with reflecting Heidegger's Sein und Zeit. I quote from my Berlinale review of Carter's Maladies, a brilliant follow-up to his Erased James Franco which was the movie star's vehicle into the art world:

Maladies had a gender balance reflected both in the film's formation and inspired pairing of the ever-present James Franco with Catherine Keener fulfilling a genuinely exciting evolutionary role of an awakened woman grounding the male spirit in desperate search for feminine form.

James the actor playing James the writer dedicated to the pursuit of gae saber directed by the multidisciplinary genius Carter on the set of Maladies. Photo credit: Pamela Berkovic.

Given that Franco's genius for collaboration is both the source and necessity of his ouroboric art form, Gay Town, timed to the premiere of Maladies in Berlin, portends an awakening. The cyclic time symbolized by the Ouroboros serves to renew the German historical cycle within the contemporary context of the Uncertainty Principle captured by the film's male narrator, the ego that is missing in the rampant id of Gay Town.

All in all, this marks in Berlin 2013 the quantum wave breaking to uncover a new archetype in the very place where it came into contemporary human form -- the Weimar film.

Lisa Paul Streitfeld is a philosopher based in Berlin and Ph.D. candidate in media and philosophy at European Graduate School.