This article originally appeared on artnet News. by Eileen Kinsella and Jonathan Yee 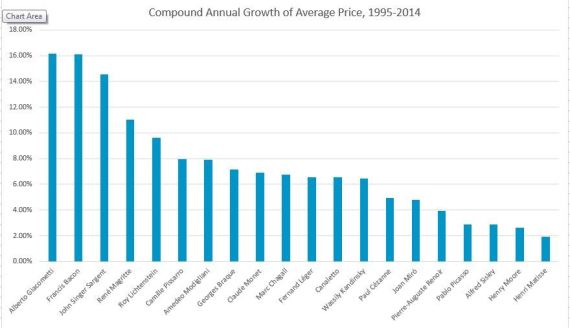 Which blue chip artists have performed the best from a financial standpoint in the past two decades?

The results might surprise you. Unlike other markets, where values are tied to set parameters—think stocks and bonds—the value of art is far more subjective, not to mention influenced by so many factors all at once: fickle collector tastes; ever-shifting critical and public appreciation; condition of individual works; and of course supply and demand. Take works by Vincent van Gogh for instance, which despite having scored some of the highest prices at auction over the years, rarely actually come on the auction block. (See: Do Riches Await In the Van Gogh Market?).

Using the time period 1993-1997 as a baseline, we looked back at the artists who were already selling for more than $1 million each at auction at that time and then followed their market performance through 2015 by tracking average prices and the compound annual growth rate of average prices. Alberto Giacometti tops the list of performers (see chart above) though some of that track record may be due to recent auction activity, say in the past five years. Though the list is understandably heavy with names of Impressionist and modern artists, it also includes at least one Old Master (Canaletto) and several more contemporary names (Francis Bacon and Roy Lichtenstein). (See: The Old Masters Market Is Restoring Its Image to Make It Sexy and Canaletto, Caravaggio Fail to Sell at Christie's Worst Old Masters Sale Since 2002.) 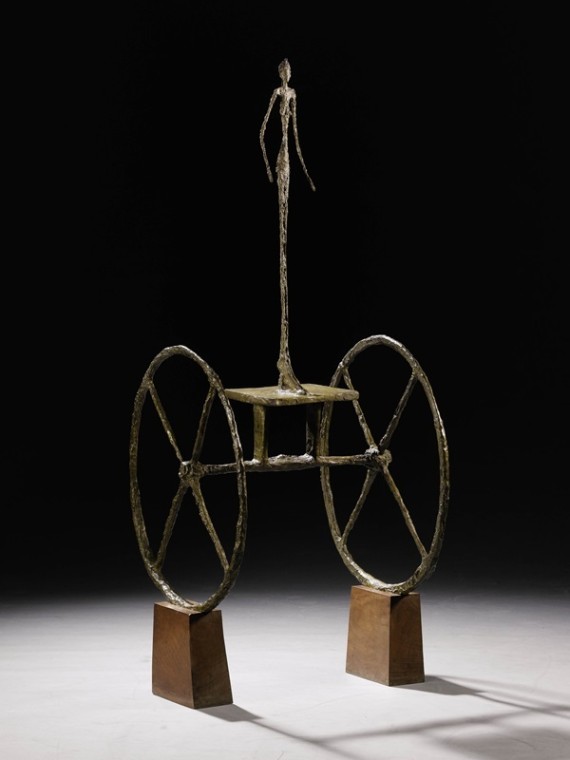 Alberto Giacometti's Chariot, which was conceived in 1950 and cast in 1951–2, sold for $101 million in New York this past May. Photo: Courtesy Sotheby's.

In 2010, Giacometti's record vaulted to $103 million (£65 million) when Sotheby's London sold the sculpture L'homme qui marche I (1960). The next three highest prices were all set in the years since then or right before (between 2008 to 2010), indicating that the market had been gathering considerable momentum in the past decade alone (See: $101 Million Giacometti Leads At Sotheby's Sale).

A similar pattern of activity can be seen with Francis Bacon, where auction activity has been extremely robust in the past decade. Bacon is second on our list of best performers as viewed by compound annual growth of average price. Bacon has been a favorite of some of the newer-to-the-game über collectors of contemporary art, particularly from the Middle East and China. The record for the highest price ever achieved at auction was the $142.4 million paid for the triptych Three Studies of Lucian Freud (1969) sold at Christie's in November 2013.

Picasso might seem to be the natural choice for first place but his market has been lofty for quite a long time now (see $140 Million Picasso at Christie's Is World's Most Expensive Painting at Auction). Artnet Analytics research indicates that between 1993 and 1997, 79 of Picasso's works sold for at least $1 million each at auction. But in terms of our measure of compound growth in price performance, his name turns up at #17.

Here is the complete list ranked in order from highest to lowest: