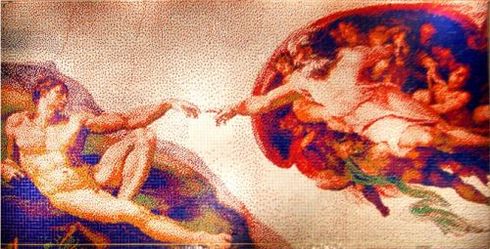 "Rubik's Cubism" is nothing new. The three-dimensional puzzle was created in 1974 by Hungarian professor Ernő Rubik and transformed into an icon in 1980 by Ideal Toy. As Chalom relates, "People have been creating art with Rubik's Cubes ever since, beginning with the first kid who took more than two and made a design." He adds, "I'm just taking it to a new level."

To reach world-record heights, Chalom faced several challenges, not least of which was the acquisition of material. He ended up buying Chinese Rubik's Cube knock-offs for about $1 apiece.

Because Rubik's Cubes offer just six colors -- white, red, blue, yellow, orange, and green -- Chalom faced difficult artistic choices too. "You couldn't have Adam looking like he just came out of a tanning salon or God looking too demonic," he says.

Finding adequate assistance presented still another hurdle. At the traditional source, art schools, the number of students longing for a paid assistant's gig is usually about the same as the total enrollment figure. But Chalom needed assistants who qualified as "Cubers"--capable of solving the puzzle in 30 seconds or less. "Like anything else you put it out on Craigslist," the artist says. His most recent "I Pay For You to Play" ad drew 168 respondents in Toronto, ages ranging from nine to 49. For the record-breaking "Hand of God," Chalom employed eight assistants as well as a project manager and a graphic architect.

The finished piece took 400 hours from drawing board to completion.

Fortunately for Chalom, the Rubik's Cube mosaic market doesn't offer significant competition; the discipline's only other major players are in France and Japan. Moreover, the market has embraced Chalom. His "Last Supper" sold in the neighborhood of $50,000 to a private collector in Florida. Chalom's many commissions include a likeness of Eva Longoria utilizing more than 800 cubes -- friends gave it to the actor as a gift.

Chalom is currently in discussions with a number of organizations, ranging from museums to casinos, to produce a full reproduction of the Sistine Chapel ceiling, 156-feet long, using more than 250,000 cubes. At the rate he's progressing, it may just be a matter of time until the rest of St. Peter's Square is cubed. 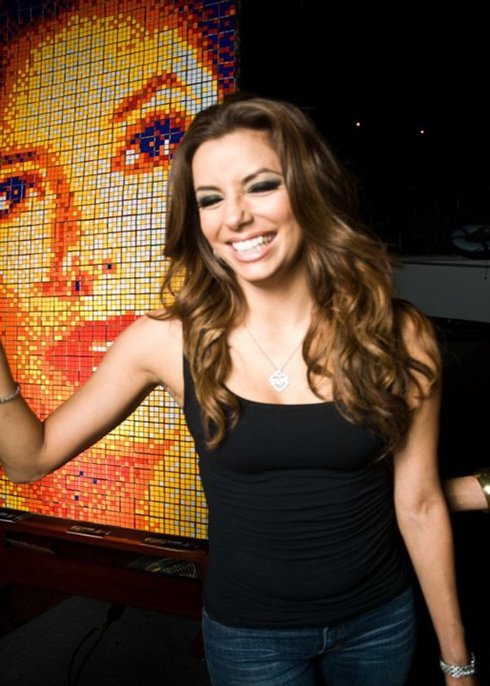 "The Last Supper" and "Eva Longoria" (with subject)