For the past eight years, Jesse Bransford has systematically engaged with ancient visual symbols and the cultural lore surrounding the seven classical planets, creating distinct bodies of work inspired by the Sun, Mars, Mercury, Moon, Venus, Jupiter and Saturn. Traversing cosmic realms, Bransford's inquiry will conclude with Saturn, during the late summer of 2012. 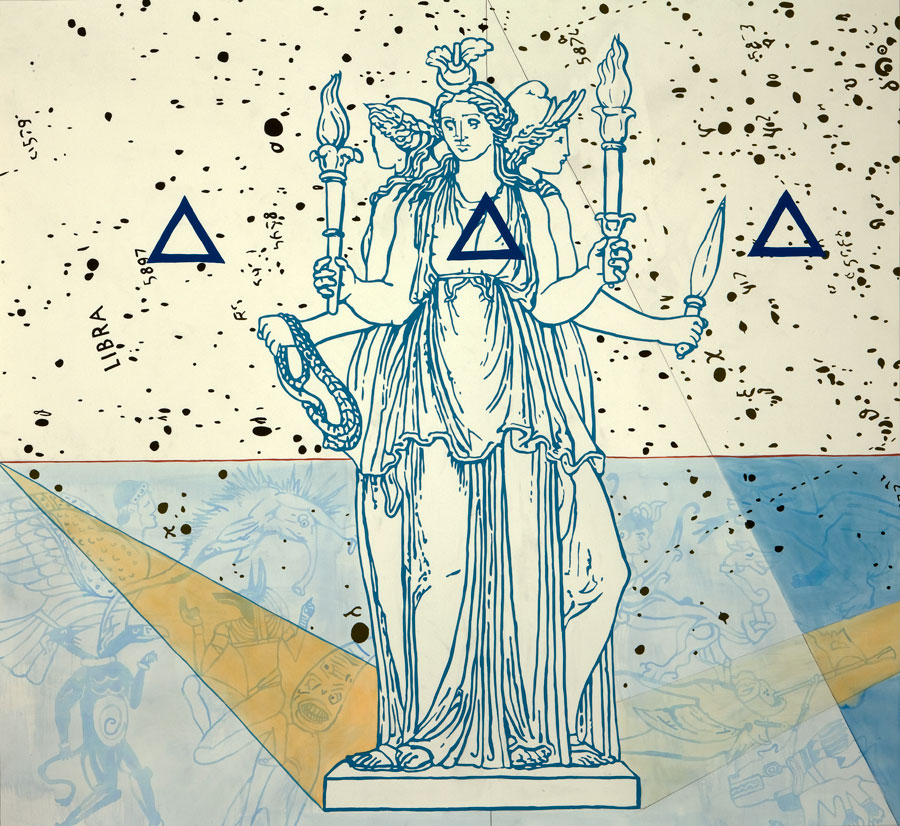 Jesse Bransford, Hecterion, 2009, 53.5x49.25", Acrylic, watercolor and ink and on paper.
Collection of the Artist. Image courtesy of the Artist and Feature Inc., New York

When you began the series in 2004, with Sol, were you consciously planning on engaging with seven planets?

Yes. I had read Frances Yates' The Art of Memory on a residency in Dijon in 2004 and the memory theaters described therein were so compelling and so tantalizing I thought "why not?" Many of the theaters organize the universe by the seven planets of antiquity and divide everything covered under those categories. There are lots of other sevens out there, days of the week, colors of the rainbow etc. and these fall right in line with the kind of organizational thinking Yates described. My work at the time was very concerned with taxonomy and organizational structures, and the planets presented a "universal" phenomena that I knew would resonate in whatever cultural context I focused on at any given moment. I wasn't sure where the idea would take me but I was sure the structure would keep me confident of my trajectory no matter how strange and complicated and weird it got. Boy did it get weird!

Can you tell us about your approach to planetary lore?  How did you wade through the complexity of belief systems, patterns, deities, avatars, situations and symbols?

I played a lot of D&D as a teenager. Gary Gygax, who is the primary figure responsible for the game, was a genius system consolidator. His ability to make feudal Japan compatible with H.P. Lovecraft's mythos (among a million other things) struck me even then. It fostered and encouraged my love of complexity and syncretism, which have both been very important to my thinking over the years. As for the specific navigation, I found myself relying more and more on a great book by H. Cornelius Agrippa, the infamous Three Books of Occult Philosophy. Yates mentions Agrippa throughout the course of her work and this text, essentially a compendium of Renaissance magic and natural philosophy, really bridged the fantasy/reality spectrum which I've been trying to get at since the 90s.

Was there any tension between representing precise ancient symbolism with
your own present-day associations?

Like all research, the deeper you dig, the more complicated it gets, but also the more universal it becomes. I think if anything, the historical and temporal dissonances in my work make more and more sense (both visual and otherwise) the further along I have gotten.

Through your research, did you find that any of the planet's meanings have changed, or eroded, over time?

Everything erodes over time. Facts melt into each other. Cultural biases tide and ebb and things get lost and forgotten and then rediscovered and re-evaluated. I've seen it on the time scale of the contemporary world and have tracked it in the space of the historical as well... I'm not sure if there is a teleology per se in the working of the universe, but things definitely evolve and change. Some of the associations and connections have been quite surprising. While researching Venus, I came upon one of the Mayan gods for Venus, Xux Ek, the "wasp star." The last two records by the British Pop band XTC were meditations of the idea of "woman" and one of the records was subtitled "wasp star," a reference I never understood previously. You have to dig quite deep in a Google search of "wasp star" to get to the Mayan reference. One of the sillier of a thousand gems of research! 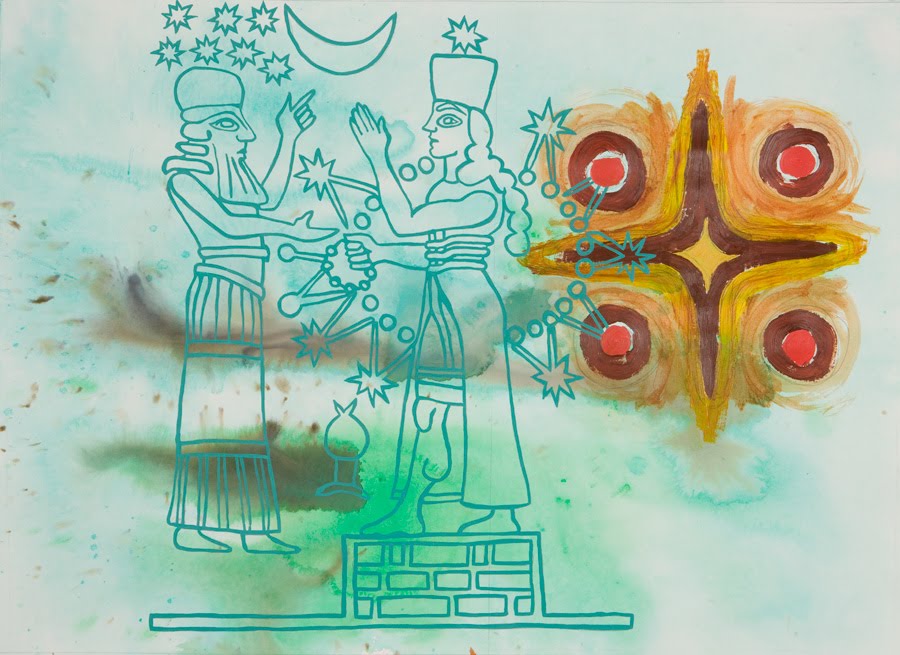 In terms of art history, spanning towards the present, what is the contemporary space that you see this work carving out?

Something I've realized is how self-made histories are in the contemporary moment. The reality of the historical record is such an interconnected tapestry it becomes very interesting to watch the movements and trends bleed into each other. These histories create quite an eclectic set of circumstances, so what really happens is you find yourself making your own genealogical threads. The novelty of Modernism's rupture isn't so novel. Time seems to be a series of perpetual ruptures and confluences, which is a bit scary because it leaves things very unstable. But things are very unstable.

Recently I've been researching the College of Sociology group in pre-war France and Andre Masson in particular. To discover his letter correspondence with Alfred Jensen (another person I look at a lot) is a great example of the kind of subtle interconnectivity I'm talking about...

Upon researching the cultural significance of each planet did any surprises emerge?  Did you find that any of your own assumptions or interpretations shattered?

I learned pretty quickly to leave my preconceptions at the door. I think you can really see it in the way the work develops. Things get really open by the time I'm working with the Moon, and Venus in particular feels loose and all over the place. I do notice that typically one or two civilizations seems to be more present than others in each planet. When India reared it's head in Jupiter I was very happy: I've been trying to get some sort of handle on the visual culture of India for over 20 years.

What was the most challenging planet to engage with? And meaningful?

By earmarking the last ten years of studio practice I can really focus on each time period and see the best and the most difficult aspects. It's been amazing to connect things to one another through the thinking that the planetary sequence almost universally suggests. Getting to install the Mars work in Köln in 2006 was a real highlight. For each exhibition I've been able to install temporary wall works, and something about their temporary presence in the world marks the completion of the work on that planet as a whole. The final three planets have yet to be exhibited, and I'm in the middle of Saturn currently, so I think there is still space for all sorts of other developments.

You also devote research to political and social philosophies; what are the social implications of this scholarship and practice?

I believe the position of the artist is absolutely political. I think how we choose to live our lives in relation to the world is the most important thing. It can be pretty intense to realize every exchange you make in the world means something, but it really does. I glimpsed this in high school and the feeling has only intensified over time. There's an infinity of versions of the world out there, but more and more it seems as though we choose not to see that fact. It's a scary time. But I try to remain skeptically optimistic. One way I like to think I exercise my politics is through my teaching. I think it's the highest privilege to teach and to help young people form their own autonomous views of the world is hugely political. How the teacher wields that responsibility has a huge impact. Having been teaching for the last 10 years, I can see the effect it has on the world in a very direct way, in some sense even more clearly than my work. Realizing the two activities (art and teaching) have a bridge in the political has been a real insight over the past few years. I was surprised and gratified to see how much traction the recent Paper Monument text Draw it With Your Eyes Closed: The Art of the Art Assignment has gained; it's reception says something in line with my sentiments I think. Participating in that was a real pleasure. 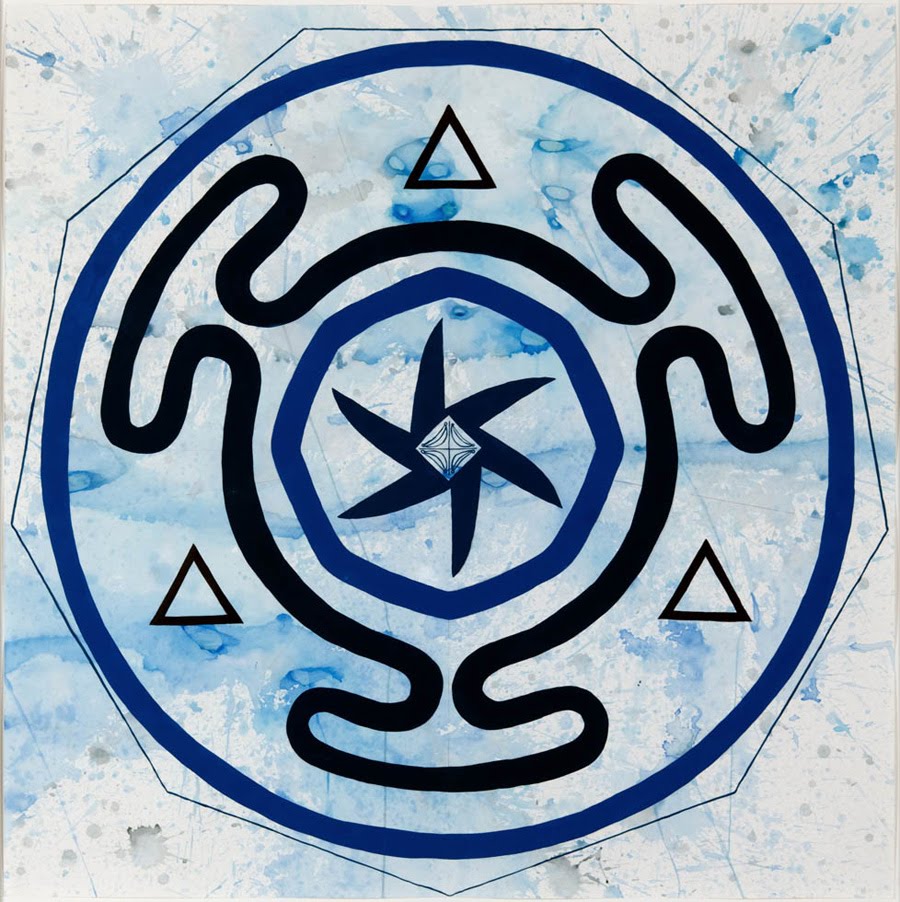 Jesse Bransford, Ἑκάτη (The Stars are Our Destination), 2009, 48x48", Acrylic, ink, watercolor and graphite on paper. Collection of the Artist. Image courtesy of the Artist and Feature Inc., New York

What role does magic play in this series?

My relation to magic was flirtatious at the beginning but consistently intensified every step of the way. What we're calling magic for convenience here takes all kinds of forms, but magic is more and more the best term to describe it, especially as I get more involved in the specific histories. Other historical terms, l'impossible, pure immanence, and even aesthetics aren't inappropriate either, but whatever we choose to call the action-at-a-distance in our being-as-people seems to ground everything. Put another way, the why of art gets more and more important the longer I do it, and various forms that can be considered magic have all become quite important to my thinking and doing. I don't think there's necessarily an answer to the why, and that lack of an answer is bound up in every system of "magic" anyone ever worked with. I've gotten pretty heavily involved with multiple versions of magic in the last several years.

How does it feel to be nearly finished?  Will you take on another cycle, in a planetary fashion?

Probably not. I've gotten much more interested in a dispersion of content. I used to run from the everything-is-everything headspace, but I've gotten a lot more comfortable and confident in that space. I doubt I'll stray too far from my core interests, my occult/magic studies have certainly intensified and deepened in a way I don't see letting up any time soon. But I doubt I'll have the urge for another 10 year project in the immediate future!

It seemed appropriate when I started (I knew I would start with the Sun and end with Saturn) and is doubly so here on the other side. There's a resignation that revealed itself a year or so ago that is bittersweet and melancholic, but also a wellspring of creative potential. I've always related to Saturn and melancholia, so it seems like a return of sorts. I also found Yates and the occult material after encountering melancholia as a concept in psychology. I relate to the idea that the melancholic temperament is conducive to creativity. Recognizing one's mortality and being unable to reconcile it seems a natural state to me.

What are you working on next?

I'm in a group show at Observatory in Gowanus opening April 27th called Signs & Sigils. I've been working closely with Pam Grossman, the curator for a few years now and she has really encouraged and supported the work. I'm curating a group exhibition at Southfirst Gallery in Williamsburg called That Sinking Sense of Wonder which is set to open June 15. And finally, this summer I will be finishing a NYC public art commission for a school that is being built on 35th and 1st Ave. I've been working on it for almost three years, so 2012 is very much a year of completions! After that I look forward to where the world might take me! 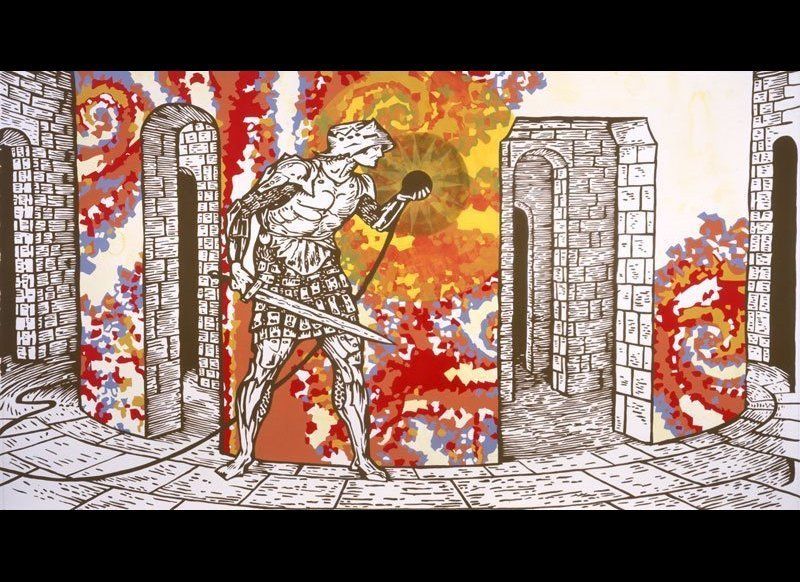