How have you sustained such a labor intensive, focused practice of layering soft graphite again and again, and how do you come to terms with finality upon knowing a drawing is finished, after this impressively focused repetition wanes? This measure of control, with your drawing methods, brings to mind the moon controlling the tides.

A black field is built up through the slow accumulation of many soft layers of graphite pencil laid in diagonal swaths. This method results in an even application of material with a skin that displays minimal surface markings. This is a pragmatic effort toward the realization of a truthful rendering. I know that a drawing is finished when the materials reach a saturation point: no successive layer of graphite will produce a darker image.

This working process is a satisfying experience. Progress is linear and improvements in my technical skill are immediately visible. I understand that some might find it oppressive to undertake something so laborious, but for me it's comforting to have such serene, abiding work. The tempo these drawings require rewards me with the gift of time. This precious resource is hard to come by and easily lost, especially when living in a big city. I feel really grateful that it's a byproduct of my studio work. Juliet Jacobson. Courtesy of the artist.

These two bodies of work have a lot in common. Physically each shares the durational aspect of painstaking execution, meticulous attention to surface treatment, all-over compositions, and the burden of horror vacui. Thematically, my interest in limits, the universal, the common, representation, and perception is expressed in both sets of drawings. I understand that your moon drawings engage with the limits of vision and are literal renderings that potentially escape metaphor, representation, or association. What has inspired this, since the moon is charged with complex symbolism, meaning, lore, and association? Is this why all of the drawings are untitled?

While the image of the moon conjures notions of the feminine, the remote, and of change, the treatment of my drawings emphasizes materiality and presence. The phases of the moon serve as markers in time recognizable to humankind throughout history. The depiction of these images punctuates the sequence of drawings of the dark, grounding them in visual experience as discrete scenes.I have always been interested in symbols that are over laden to the point that they lose power and become emptied of meaning. The mirror drawings are full of them, including moons. The image of a human skull is a clear illustration of this paradox -while a primary allegory for death, it is also ubiquitous, and so the image has no capacity to arrest your attention when it flutters by on a t-shirt. Figures like this are a shelter that unites the ecumenical, the cosmic, and the mundane.

In deference to this confluence, I used to pluck titles from trite song lyrics that I experienced as touching. The current drawings partake in the same kind of exultation of the generic, but are not at all solicitous of mediation or popular culture. "Untitled" is a neutral or unadorned way to describe the drawings, keeping the title out of the way of the work. 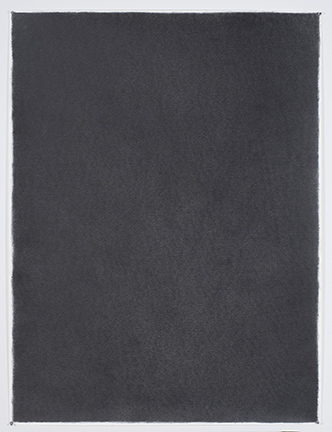 Can you tell us about the black drawings?

In some ways my drawings are like traditional landscape paintings. Yet they appear to depart from representation. The drawings are pictorial and invested in both naturalism and realism, though they rely on a serial strategy that appears in 1960s Pop and Minimalism. They are pictures of the everyday human experience of the limitations of vision. In the moonless pictures of the dark there is little remove between the referent and its representation.

I first launched this body of work on an isolated farm in upstate New York. I was able to live and draw on the farm a few days a week over several years. Sustained immersion in the natural landscape, coupled with an effort toward the careful observation of each passing moment, was instrumental in the inception of this project. Under these conditions which presented endless diversity in the sensual world, I encountered nights so black that not only the horizon, but all difference, was entirely lost. The Black Forest is not a figurative name; on a dark night when the trees hold their leaves there is no light to see by.

This experience at the very edge of human aptitude is shared by all; we have limits in common and share a certain poverty of being. I've been thinking of other subjects with similar qualities to use in my practice. People are incredibly inept at perceiving time and I have been preoccupied with the idea of saturating a space with time, the way the paper of my drawings is saturated with graphite. My fascination with the ocean has lasted for years, maybe because the idea of the horizon is a contradiction in that it represents the infinite but is actually only a narrow boundary of the visible before the earth bends away from our eyes. That's an extrinsic spatial limit, but is inescapable anyway. I was excited by your opening comment about tides because it pulls together time, the ocean, and the moon, all really elemental phenomena that I'm entranced with.