Syrian artist Jaber Al Azmeh began his series of red and black photographs during the early stages of the revolutionary movement in his country. He sought out individuals from his own social circle who were actively involved with the protests on the streets and began capturing their stories in a project titled "Wounds." That is, until clashes between activists and authorities escalated and forced Al Azmeh to leave his country along with others who had criticized the regime of Bashar al-Assad.

Forced to relocate, Al Azmeh continued his work in Doha, Qatar, re-enacting the stories of his fellow activists himself. He used his own body to mimic the movements and poses described to him in his subjects' stories, relying not on the individual features of a person but on the universal sentiments of their struggles. From a writhing body to the release of a single bird, the simple actions evoke notions of freedom characteristic not only of the revolutionary period in Syria, but of liberation movements everywhere.

In anticipation of the exhibition of his project at Green Art Gallery in Dubai, we asked Al Azmeh about his experience creating art in Syria and how he feels about the escalation of violence in his country. Scroll down for a slideshow of images. 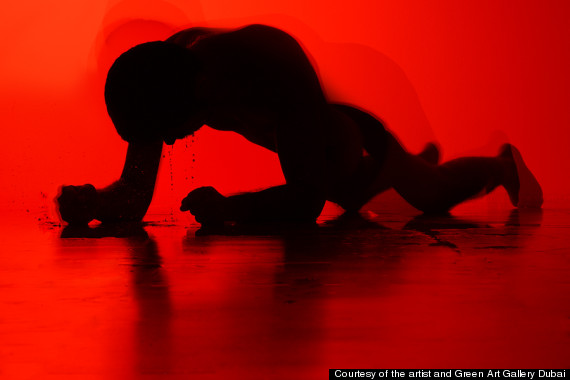 What was your opinion of the Assad regime before demonstrations broke out?

JAA: I'm almost 40 years old now and I have only ever known the "Assads" as presidents -- first the father and now the son. Both the regimes have always been brutal and I have despised them, but at that time you could only say how you really felt in front of your friends and people you trusted. We have been living in fear for decades, if you were caught speaking against the president than the chances were you would suddenly "disappear." Of course, if you were a "good citizen" (in their terms) you where allowed to live in Syria and have a normal life. But once you started asking for more rights, more dignity and freedom than the life "they allowed you to have" would also be destroyed. Their regimes verged on idolatry; they thought they were Gods and behaved accordingly. They believed they owned the country and therefore owned all the people within its borders. I would say most of the Syrian people felt the same way, and yet very, very few of us dared to speak our minds out loud. We either had to accept the life they imposed on us or face the deadly consequences.

While you were photographing the protests and interacting with activists in the revolutionary movement, did your view of the situation in your country change?

JAA: The vision of the revolutions was the same to everyone, it was clear: A struggle for dignity and freedom, a struggle to have a country for all Syrians as equals, and not a country run by one family who we did not rightfully elect.

Interacting with the activists is an amazing experience! They are people with such a clear vision and so much determination, will and bravery. In the beginning of the revolution, it was like a huge workshop that almost everybody was participating in, and lending a hand to; there was so much patriotism, so much love and belief that we are heading towards a long-lost dream we thought would never come true.

Your photographs do not show any distinct features of your subjects; instead they show only the outline of the individual’s body. Why did you choose to do this?

JAA: I've worked on two projects for the revolution. "Wounds" was the first, and I approached it in an artistic, dramatic, and perhaps romantic way, where my subject is the revolution itself rather than the individual participating in the revolution. This is about the "whole," where society and the individual blend and melt together in the pursuit of one dream, one goal.

While in the other project, "Small group of Syrians," I'm handling the matter with a more documentary-artistic approach, where my subjects appear clearly as individuals and are speaking out their names in a gesture of freedom and defiance to the regime, despite how dangerous this is for them.

The series are based on stories that your subjects witnessed or heard on the streets. How did you guide your subjects in reenacting these stories?

JAA: Only two of the works of the series are other individuals "performing" these stories. Unfortunately i had to flee the country at the early stages of the project for the safety of my family and myself. I had to create a very humble working environment and then began to reenact the stories myself. I felt that this project absolutely had to be completed; however, it didn't take much "guidance" so to speak. Everybody was following every story that was unfolding in our country, it was almost like we were all living these stories ourselves. 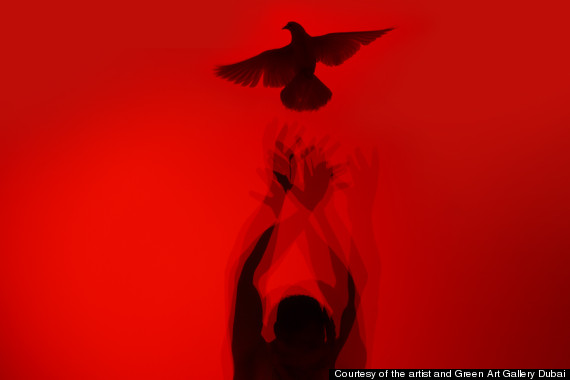 When you began reenacting the stories after you left the country, what was it like for you to step into the shoes of the activists?

JAA: We all had the same thoughts… visions… ideas and dreams. We were all activists in our hearts. It's not like the activists are people that different from us; they are us. My dentist, my barber, my students, my neighbor, my friends. The difference was in actions. It needed exceptional bravery to be an active revolutionary against this criminal regime. So stepping into their shoes was no difficult act, it was actually no act at all; it was an urge and a desire that alas I did not dare accomplish.

The revolution in Syria began with peaceful demonstrations and turned later into violent confrontations between protestors and the ruling regime. Was this change in sentiment something you tried to capture in your images?

JAA: This regime is targeting field hospitals treating the wounded .... targeting civilians standing in front of ovens to get some bread ... targeting drinking water pipes. They want to ensure that those who survive the bombings die of thirst or hunger. Does this really happen in the modern age of humanity?! Where is the world?!

When the revolution turned into an armed one, I chose to be rather silent about this shift, not because I'm against it as I know the extent of crimes the regime is doing and the extent of suffering that the people are enduring. I know that the people tried and tried to remain peaceful. Still we know that no revolution against a criminal dictator in history succeeded without a battle because dictators simply do not understand any other language. Violence is the only thing they know.

Yet this shift made me sad or frightened as I was aware that during the battle this will bring more bloodshed, more agony to the people, and it will bring on more international intervention from political forces who are simply watching the slaughter from afar.

How do you feel the artistic community overall has responded to the revolutionary movement? Have most artists been eager to express pro-revolution ideals?

JAA: No, not all the artists, but I would say most of them did; it's not an easy decision. Producing art works and publishing or exhibiting them from within the country is almost impossible. Yet I think that the art community in Syria has responded in a positive way, especially with young and new artists. We are seeing new forms of 'art' emerge, including street art, with very interesting and creative results.

View images from Jaber Al Azmeh's "Wounds" below. The exhibit at Green Art Gallery will run from September 10th until October 29th, 2012.