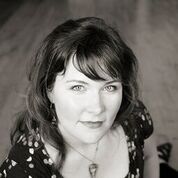 Francis Crick, shared the Nobel Prize in 1962 for discerning the structure of DNA. It was perhaps the most important biological discovery of the past century. But then Crick became fascinated with the nature of consciousness, an imprecise and controversial field at the time, and moved from England to La Jolla, CA, to the Salk Institute for Biological Studies. His granddaughter Kindra Crick, a cell biologist and artist who created the DNA sculpture called "What Mad Pursuit" for the billion dollar Crick Institute in London, recalls those heady times of early science on La Jolla's Mesa, "The Miracle Coast."

Intellectual Capital: How did you come to the Salk?

Kindra Crick: The summer after my freshman year at Princeton University I was trying to decide my major so my granddad, Francis Crick, arranged for me to be an intern in a neuroscience lab where he worked. This was so I could to learn the nitty gritty of research. In Dr. Martyn Goulding's lab, I helped perform experiments running DNA gels and watching neural tube development (cells that ultimately form the brain and spinal cord) under the microscope.

Coming from Seattle the Salk was bathed in sunshine. The labs seemed busy even during the summer and there were a number of stimulating lectures. One was on a computer-learning program that could determine the gender of both chimps and humans from a photograph. After training it would even rate a face on how masculine or feminine it was. There was good camaraderie and the labs surrounding mine would get together on Fridays for drinks and barbecues on the weekends. I played on the lab's softball team.

My granddad had made the move to the Salk in 1976. With this came a shift in the focus of his own research from work in molecular biology in England at the Medical Research Council to the brain and consciousness at the Salk in California. Then 60 years old, he wanted to tackle a problem that had been a lifelong interest, the brain. He wanted to move the field that treated the brain like a black box, where one only gained insight from resulting actions, to a field that would uncover the mechanism and functions that lead to how humans perceive the world, what happens during sleep and the elusive actions inside our skull that constitute our conscious world upon waking.

Intellectual Capital: Which scientists impressed you?

I vividly remember a long lunch with Dr. V.S. Ramachandran who spoke enthusiastically about his work with patients with phantom limbs who sometimes experienced excruciating pain in a hand or arm that was no longer present. He had discovered that with the use of a simple mirror he could instruct amputees to look at the mirror image of their working hand, which appeared to take the place of the missing one, and unclench it to relieve their phantom pain. My granddad was an attentive listener and would occasionally probe with a targeted question, but I realized a few years later when reading Dr. Ramachandran's book 'Phantoms in the Brain' that we had discussed many of the central themes and imaginative experiments in that book.

Another scientist that made a lasting impression was my granddad's long-time collaborator, Christof Koch. He would come by the house often while I was there, and they would discuss and debate the way the visual system worked in the brain. A conversation that stood out was how one perceived the blueness of blue. At first, I didn't understand the question, although it seemed like such a simple one. We walked through the basics of wavelength and the mechanisms of the eye with its cones and rods. And then we jumped into the visual cortex and the more abstract part of the question which was why at a particular wavelength our perception changes and we have a name for this color and there is a quality to that color that is a sensation separate from its name and the objects that we perceive to be blue. A quality missing, for example, from something outside our realm of seeing, like ultraviolet. One can describe everything about ultraviolet, but with our naked eye it does not possess a sensation of color like blue does, in our mind.

Intellectual Capital: What was it like living with Francis and your grandmother Odile Crick?

My grandparents lived in a quiet cul-de-sac near the top of Mount Soledad in La Jolla. I stayed in a large guest room which had its own entrance with French doors opening onto the deck and pool. People came over for dinner and lunch, but there were no large parties at the house that summer, as my granddad had been having slight heart problems. We did attend a few parties that summer, the most memorable being the one to celebrate the 85th birthday of Bradley Smith, the noted Life magazine photographer. Intellectual musings tended to be at smaller gatherings and over leisurely lunches by the pool, and most of the guests my grandparents entertained were photographers, painters or scientists.

Intellectual Capital: Do you visit the Salk now? How have things changed?

Not only did Francis end up tackling the problem of consciousness himself, collaborating with Koch, but he was slowly and deliberately recruiting some of the best and brightest to unlock the black box of the mind. For example, my granddad gathered with a small group of scientists who called themselves the Helmholtz Club. This group brought together scientists from various research fields as neuroanatomy, neurophysiology, psychophysics, computer science and engineering. All had an interest in the study of the visual system and of higher cognitive functions relying on visual perception such as visual consciousness. I believe one of the reasons San Diego and The Salk have become a hub of neuroscience research today is based partly on the work and vision of the scientists who attended those monthly meetings. The study of the brain is a burgeoning field and we are right in the middle of it. I have been told by many of my granddad's peers, that he was a tremendous inspiration and influence.

Intellectual Capital: And talk of your own art, its roots or themes--

At Princeton, I embraced the study of molecular biology but balanced it with my passion for drawing and painting by developing visuals and materials for campus theater. Biology itself is a visual subject, rich with a tradition in observation and communication through art. I still enjoy research, but I feel most driven when I am making art. My early experiments with the marriage of art and science came while at the School of the Art Institute of Chicago. In my paintings, I incorporated imagery from my observations under the microscope in the lab where I had worked on [breast cancer genes] BRCAI and BRCA2. Cancerous fibroblasts would envelop my canvas in layers. The birth of my daughter and my obsession with the new research on the biological basis of love fully crystalized my passion for merging science and visual expression. A series of prints and paintings questioning the science and symbolism of one of our most basic drives, love, soon followed. Now I create work that gives visual expression to the wonder and process of scientific inquiry. 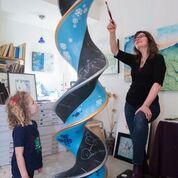 Intellectual Capital: And your approach to your new sculpture--

I was invited to paint 'What's in My DNA?' on a seven-foot double helix-inspired sculpture.
This sculpture was part of Cancer Research UK's campaign to raise awareness for the soon-to-be-finished Francis Crick Institute in London. Twenty-one sculptures were created by world-leading artists and designers, including Ai Weiwei, Zaha Hadid, and Benjamin Shine, based on what's in their DNA.
My sculpture, What Mad Pursuit, explores the creative possibilities achievable through the intermingling of art, science and imagination in the quest for knowledge. The piece is inspired by my grandparent's contribution to the discovery of the structure of DNA. My grandmother, Odile Crick, was the artist who first drew the iconic image of the double helix molecule.
Half of my double helix sculpture is a chalkboard layered with the patina of science. I christened the chalkboard by writing, erasing and rubbing in the dust the words from some of my favorite scientists, including Oliver Sacks. What I left visible for the viewer to discover are handwritten notations from my granddad's letters and his many chalkboards. The complementary helix strand is a flourish of vibrant blue bordered by a golden helix. The abstracted growing forms that spread and mutate up the sculpture can be seen as cellular life or as a metaphor for infectious ideas.

I took the title 'What Mad Pursuit' from the title of my granddad's 1988 memoir and essays on scientific discovery. My granddad chose that title from a line in the Keats poem "Ode on a Grecian Urn." It is a nice banter between art and science and speaks to the mad pursuit of both, and sold earlier this year at Christie's London, at an auction that raised $500,000 for the Francis Crick Institute, a leading center of biomedical research and innovation due to open in 2016. 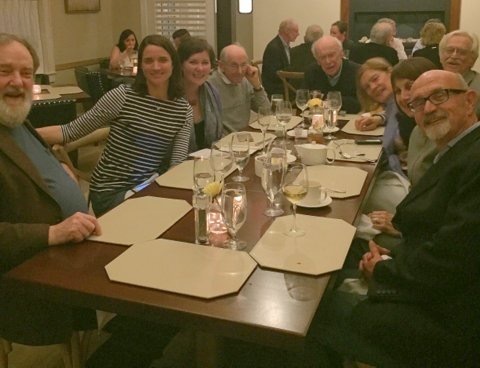