Religious groups have been major patrons of the arts throughout history, but they're also prone to raising objections with offensive pieces. The latest offender, a collage by Philippine artist Mideo Cruz, includes a poster of Jesus with wooden phallus glued to his face. Cruz's work is part of an exhibition held by a group of alumni from a religious university, in which artists were asked to create pieces that question figures they idolize.

The piece is displayed in the government-run Cultural Centre of the Philippines, a fact that has sparked protests from Catholic groups in the Philippines.

Catholic Filipinos have been outraged over what they call a blasphemous work, calling for its removal and threatening lawsuit. A statement on the website of the Catholic Bishops Conference of the Philippines quoted Catholic activist Jo Imbong, who said "those responsible for the public exhibit... have a liability because they offended the religious beliefs of a country that is 85 percent Christian."

Imbong also said that the exhibitors could be charged with violating an "immoral exhibition" law, a term usually applied to pornography. The show also includes an image of Jesus with a red clown nose and Mickey Mouse ears, as well as a cross made of discarded wood.

Emily Abrera, chair of the Cultural Center, defended the work and her choice to display the work, stating on ABS-CBN television, "We see nothing wrong with it. It is part of our culture to question, to seek answers, to look behind the surface and try to dig out what our real values are."

See the works below and voice your opinion on its offensiveness. 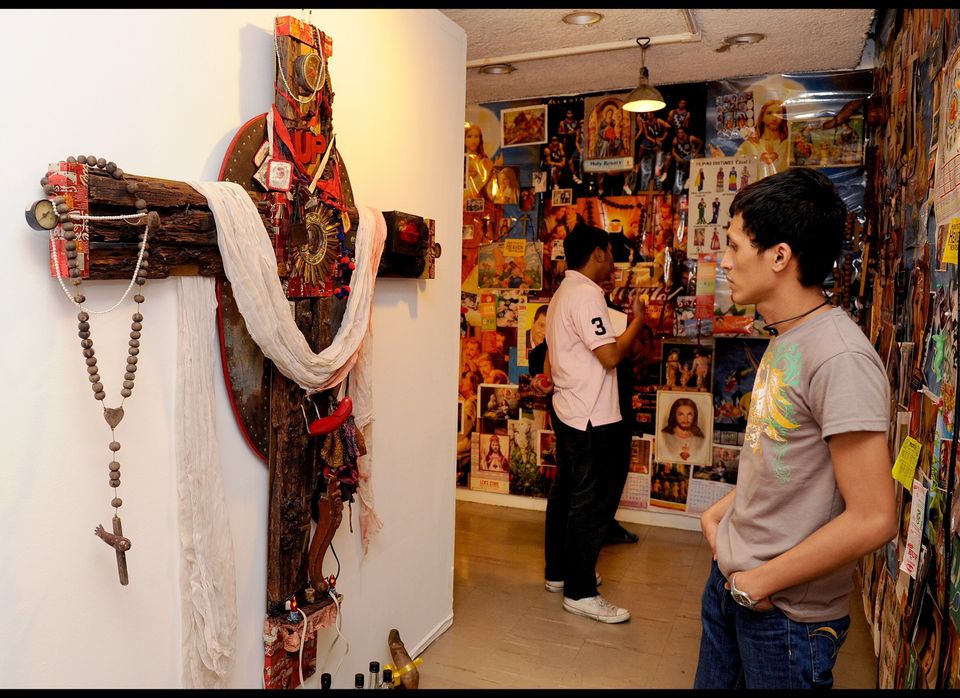 1 / 9
This photo taken on August 3, 2011 shows a student looking at artworks, which included a poster of Jesus Christ with a wooden penis glued to his face, at an art exhibit in Manila.
Getty