Ever since Bay Area painter Nellie King Solomon had her first solo show in San Francisco fresh out of graduate school in 2001, her work has met with positive reviews, even from the hard-to-please SF Chronicle art critic Kenneth Baker. (She's also a three-time SECA nominee, up again for the award this year.) The final words of his glowing appraisal of that first show also issued up a challenge that many shared: "Her show is a powerful debut that will be hard for her to follow." Solomon laughs about the gauntlet Baker threw. Her reaction? "I was like, you do not know who you're messing with." Almost a decade later, the work is stronger than ever. 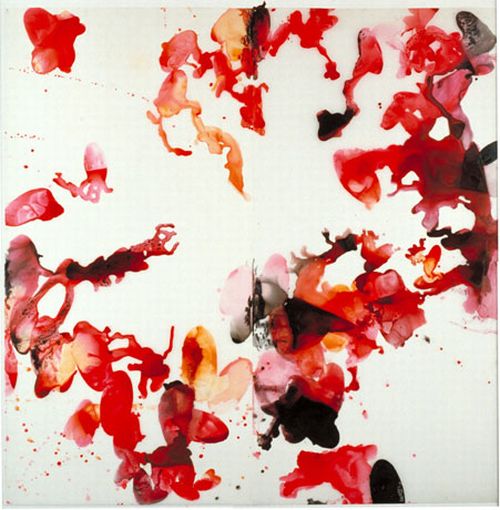 Solomon makes luscious, ephemeral large-scale abstract paintings on Mylar, addressing issues of space and environment, control and movement. They are created in her light-filled Hunter's Point studio, on a table using handmade tools or sometimes just gravity to maneuver the paint. The imperfect surface contributes to the creation. Her early works were bright and fluid; puddles and rivulets meandered over the opaque surface resulting in meditative, organic paintings. On some, oval marks stamped with one of her homemade wooden tools, are also evident, harkening back to the point at which Solomon started her artistic journey--with the dot. 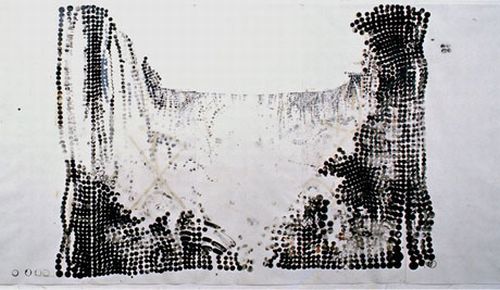 Solomon's path to painting was indirect. Raised in San Francisco by an architect father and philosopher/dancer/writer mother, she's known the creative life since birth. But it wasn't clear until she'd already pursued several different avenues, including sustainable agriculture and architecture, that painting would be her primary focus. The decision to pursue art--Solomon earned a master's of fine arts degree from California College of the Arts--coincided with a shift in momentum. "The reason for the dot was to stop traveling. Every two years I would leave some city and move to another. I needed to stop. The line, which was architecture, was also travel; so I took it away. I was in dots for four years before I touched representation and then another four years before I touched color. Then it moved to these ovals because I wanted a little bit of speed, but I still wanted it to stay slow." 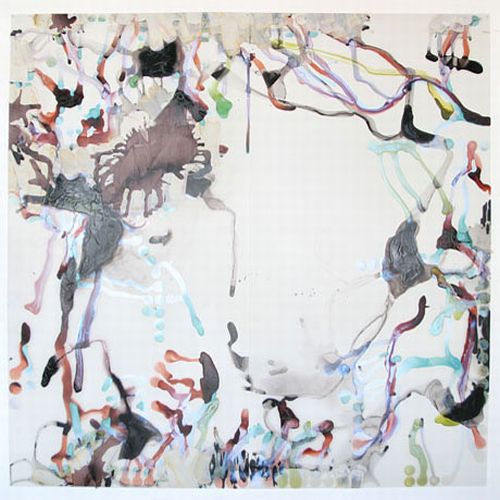 With this new work, Solomon is beginning to move. Whereas past paintings were almost self-created by the undulations of her work surface, in these, Solomon is the primary guiding force. A common feature throughout are large, thick rings that don't quite close; the shape is created with a graceful full-body gesture, a nod to Solomon's early training as a dancer. "I have hidden that strong arm behind my back for a long time," she explains. "I'm just letting it come out. That's one reason I work so large. I want it to be to some degree out of my control. If it's too big for me to be able to handle, it keeps me from getting glib. It keeps me a little scared." Solomon's increased boldness is also evident in her changing palette. Pretty pinks, reds, and yellows of the past are replaced by toxic neon oranges and magentas and dark browns, black, green, and blue mixed with glitter; the edges, caked with soda-ash, have a corroded texture. The influence of Solomon's interest in the environment, and the increasing degradation of it, is increasingly obvious. Gone are the delicate niceties of early work; these paintings are brave, brazen, and intense. 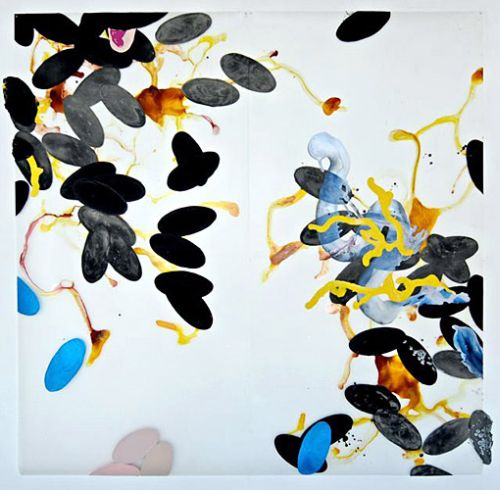 "I always knew I had something to say," says Solomon, reflecting back over her career to date. "I just didn't know what I was going to say. But I knew that nobody was going to do it if I didn't. I feel like I'm just getting started." 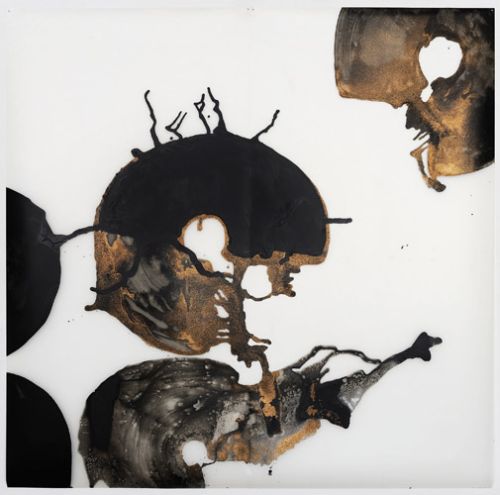