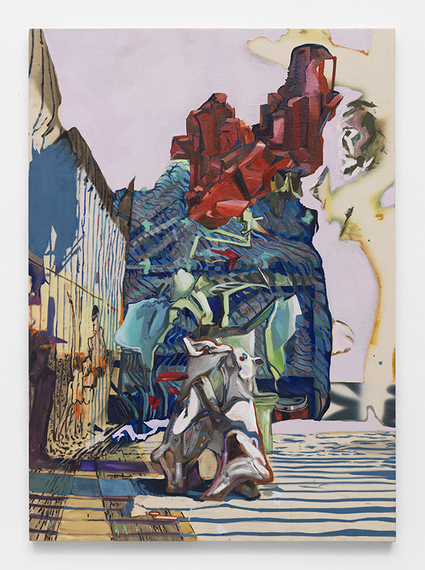 This is the second in my series on Virtual Reality as an emerging art form.

Sitting in a swivel office chair at The New Museum's incubator lab on the Lower East Side, I glide effortlessly across a horizonless, watery blue sky. My gaze has become a force of nature. It pulls me past a distorted refrigerator. I skim over potted plants, a bed, a painting. Bracing myself for impact, I dissolve like a ghost into a hazy open staircase that leads nowhere, and out the other side. The music ends. I make no attempt to move. I'm a little in awe like I've just seen the future. Rachel Rossin, the Virtual Reality Fellow at NEW INC, removes my earbuds. "It's over," she says, meaning "take off that Oculus Rift and get back to this other reality." 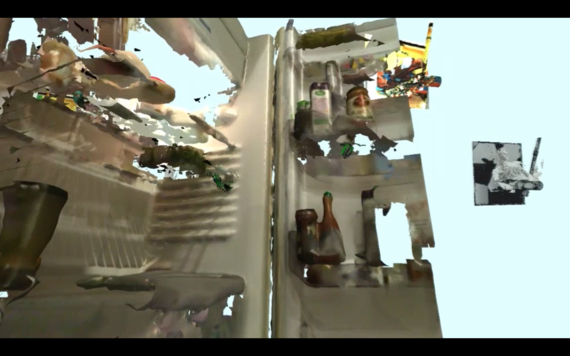 Screenshot, "I Came and Went as a Ghost Hand," Rachel Rossin

Rossin's "I Came and Went as a Ghost Hand" was part of her show "Lossy" at Zieher Smith & Horton gallery. In computer terms, "lossy" refers to the loss of data that can occur when a file is compressed and reconstructed. In Rossin's show, it also refers to how humans consolidate and filter experience to form memories. For this body of work, the artist began by taking intimate photos of her home and studio, scanning these into her computer and manipulating the images. She then used screenshots to create a series of physical paintings in oil and airbrush. Rossin likens this vertiginous oscillation between perception and memory, the real and the virtual to:

"(the experience) of walking past the pockets of reality when you're in New York. Walking past the lit windows in the city at night. People's bedrooms, Chinese gyms, little stores. I get the feeling that I am scrubbing a time line like a movie - going back and forth between realities on top of each other."

For me, however, these 3-D objects are not like incidental scenes imbued with possible real-time narratives, rather, they look like ancient artifacts, like cave-paintings or rock formations, caught in time. Experiencing "Ghost Hand," I felt like I was seeing familiar things differently, not just because of the data loss which reduces some objects to their raw qualities--color, shape, volume, and which causes erasures, but because of the unsettling experience itself: moving through objects, speeding up, slowing down, torque. When I liken this work to the architectural landscapes of Thomas Scheibitz or the installations of Mathew Ritchie, Rossin disagrees:

"I don't think 'Lossy' is an architectural space... It's about the absence and the void in between memories, these memories just happen to be captures of interiors...I see how you're drawing parallels in process between myself and these two but the spaces in my pieces are very personal."

Rossin admits that the uncanniness of the scenes, the making strange of the familiar, risks a descent into kitsch surrealism e.g. the melted clocks of Dali's Persistence of Memory.

"Yes, an artist worries about Dali as it tends to feel like low-lying fruit, but Dali, like Kahlo is interested in narrative and magical realism much more than Ritchie and Scheibitz." 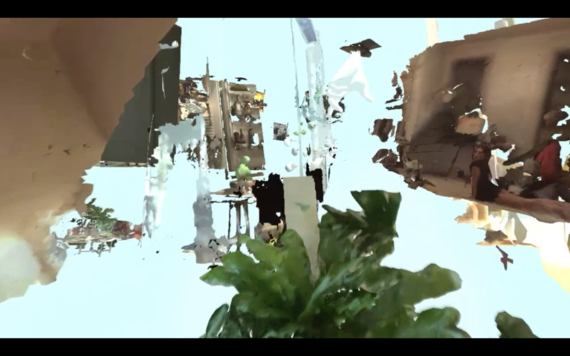 Screenshot, "I Came and Went as a Ghost Hand," Rachel Rossin

As "Ghost Hand" amply demonstrates, VR offers the possibility of a new kind of narrative--one that speaks to and through virtualized, cyborg bodies. This language relies far less on symbols and signs, and more on an iconic code that elicits both the memory of embodied sensations and the emergence of new ones. In such a language, affect and narrative results procedurally, through form and process more than through content. In his must-read essay, "Envisioning the Virtual," Brian Massumi discusses this tension between the sensual image and the virtual which produces "a field on intensity" within which the "pressure for resolution" acts as "a formative force."


"The question of perception is no longer one of truth or illusion, but of differing modes of reality, in the movement of emergence through which the forms of experience come to pass...(energy) refers to the tension between, on the one hand, the sensuous reality we associate with materiality , and on the other the nonsensuous reality of the abstract that sensuous reality envelops and by which, with equal immediacy, it is supervened." Brian Massumi, "Envisioning the Virtual," The Oxford Handbook of Virtuality (2014)

Significantly, in an earlier VR work "n=7/The Wake in Heat of Collapse," Rossin uses the procedural physics of gravity itself to shape narrative. In this work, users progress through three Dantesque landscapes populated by hacked video game and architectural elements, images from pop culture and art history. Rossin coded it so that, as the user descends, the gravity in the landscape decreases algorithmically, according to Fibonacci numbers, a naturally occurring sequence related to the golden ratio. The journey ends with a sophisticated visual pun: a broken staircase constructed from the cover of Susan Sontag's "Against Interpretation," an essay in which Sontag decries contemporary art criticism's tendency to ignore the sensual qualities of the art viewing experience in favor of theory and a convoluted search for meaning.

"None of us can ever retrieve that innocence before all theory when art knew no need to justify itself, when one did not ask of a work of art what it said because one knew (or thought one knew) what it did...In place of a hermeneutics we need an erotics of art." Susan Sontag, "Against Interpretation" (1964)

Speaking of N=7, Rossin invokes the virtual body of the player in a video game:

"In video games you have a certain type of hermeneutics...what you understand as the sort of "body language" or instinct that come with the world. Gravity - especially - falling off of things usually means death. We get this sad little feeling when we watch ourselves die in a video game and there is a pause that actually feels like critical distance and so I used that as a loose Virgil... the thing that pulls you through the layers of the separate worlds."

Unsurprisingly, Rossin, who began hacking video games as a kid, writes her own code or "scripts" for Maya, Cinema 4D, and Unity, the software that she uses to create her virtual reality pieces. Although in "Ghost Hand," Rossin gives the user freedom to move through space, the program also moves the user so that she will not miss certain images. Rossin is aware of how disorienting the virtual space can be, so she offers a familiar and friendly cartoon icon: a walking white gloved hand, that serves to reassure and orient the user. It reminds me of what Walter Benjamin wrote presciently, almost a hundred years ago, about the way in which things shift from "real" to virtual modes.

"Technology consigns the outer image of things to a long farewell...It is then that the hand retrieves this outer cast as in dreams and, even as they are slipping away, makes contact with familiar contours... which side does an object turn toward dreams? ...It is the side worn through by habit and patched with cheap maxims. The side which turns toward the dream is kitsch." Walter Benjamin, "Dream Kitsch: Gloss on Surrealism" (1925)

If Rossin's paintings skirt the edge of kitsch, they are saved by their own opacity. Her images resist telling. In this age of surveillance and TMI, her memories hide in the open. The oddly flat and static image of a woman lying on her stomach on the floor is not exactly human, just as the glowing orb in N=7 is maybe a sun or moon. What does a star or the shadow cast by a staircase mean here except as a marker, a place-holder for some memory of embodied experience? 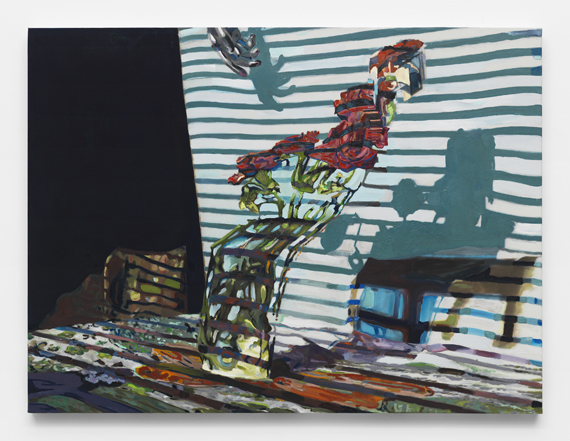 "Roses in a Vase," oil on canvas, Rachel Rossin

In technology, to be perceived as too "female" risks estrangement. As with the rest of computer technology, there is a relative paucity of women working in VR. The exception is 360 video documentary, a field which Rossin and I jokingly refer to as the "empathy industry." Rossin does not lack the sensitivity of these filmmakers. (After all, here is an artist who once invited visitors to walk through a room filled with 2500 eggshells blown clean by mouth.) But, rather than attempt to replicate the experience of the real, she explores how the compression of sensual experience into code and lived experience into memory produces new images and experiences, that is to say how it produces art.