An artist who danced with a rooster tied to his penis near the Eiffel Tower was convicted of sexual exhibitionism Monday, the Agence France-Presse reports.

Steven Cohen, 51, told the outlet the public performance -- and others he does around the world -- are meant to provoke. "Shocking is the first level we break through to get into understanding what is underneath the appearance of things," he said. 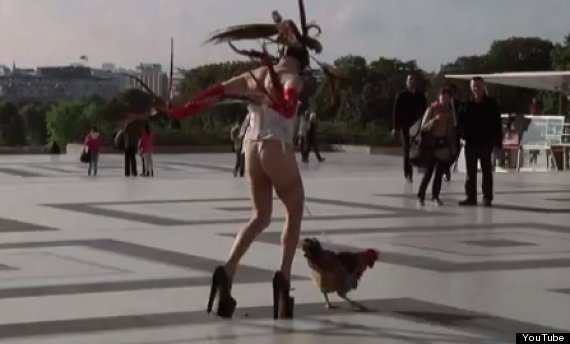 A Parisian court didn't exactly throw the book at him: It did not impose a penalty because he did not commit an actual sex act and no one filed a complaint, the Local wrote. Prosecutors had wanted him fined $1,390.

"I think the victim is art," Cohen said after the verdict, according to the publication.

Dancing in feather headdress, corset and high heels with the chicken attached to his penis, Cohen was arrested on charges of indecent exposure in September. Part of his mostly tourist audience was a group of nuns, Reuters noted. He spent nine hours in a holding cell, according to the Local. His lawyer later accused police of dealing with Cohen as if he were a "homosexual prostitute."

Cohen, who is gay and Jewish, has said his work confronts an "increasingly homophobic, xenophobic and anti-Semitic world," Reuters added.