"When I was about 6 years old I started drawing comic books. When I look back on it now I see that these comic books were about the everyday -- but I did not know that then. There were no superheroes in my comic books, which is interesting as I think back about it, but I guess the comic books that I was reading, like Archie and Garfield, were not filled with superheroes either. Why was I drawing comics? Because drawing comics allowed me to be in my own world. As a child I was really quiet and comics became a creative outlet for me. I found drawing to be freeing, and my mother told me that even as a young child I would cry really badly if I had an image in my head and could not get that image out of my head. Drawing allowed me to get all those images out of my head."

And more than two decades later, Sheena Rose is still doing what she did as a child; she is still trying to "get all those images" out of her head. Today drawing is an integral part of her artistic practice, though these days she is equally well known for her video, animation, installation and performance work.

Sheena Rose was born and raised on the island of Barbados, which retains its importance -- indeed, its centrality -- in her artistic works. She remembers that, as a child, fellow students would line up to read her really dramatic comic books and when asked what she wanted to be when she grew up, she said a cartoonist. "In primary school I got bullied a lot," the artist told me, "and so I turned to my drawing and coloring books to find solace. In time those drawings and colorings that I would do earned me a following, and helped me to better understand myself and the world around me."

For Rose drawing became one of the main vehicles she used to question all of what was going on around her. She attended an all-girls' high school where the information being fed to the young girls were at times contradictory and conflicting. For example, girls were told not to laugh too loudly, and to be "decent" when all around them women were indeed laughing loudly and being "indecent." She started using her drawings to figure out what this all meant and where she would fit into the scheme of things. More than that, she used her artwork to challenge the conventions of the society that she grew up in.

"For my senior thesis when I was graduating from college," the artist explained, "I decided to do a series of animation pieces based on dreams. In one I had a girl with a penis. I was also naked in some of these animations, which freaked my parents out. My parents begged me, 'Sheena, please don't do this!'"

But of course she did it.

She made what she calls "rough animations" utilizing her body, against which she juxtaposed classical music. "I had to do it. I just had to do that work," she emphasized to me. "My parents have always been supportive of me being an artist, and so it was doubly hard going against them, but it was really important to me that I not censor myself, not censor my work, not censor my ideas."

She continued, "I guess you could say that I love being provocative and I love making people uncomfortable, because I firmly believe that it is only when people are provoked or when they are uncomfortable that you get the truth from them. So I am the person who is always pointing out the elephant in the room. I am the one always saying what other people are thinking. People have said to me, 'Your work is so honest!' 'Sheena, you are too honest!' Some people have said that I am too frank or too open, but what I think they are really saying is: the subject matter that you bring up is making me uncomfortable. And I am like, yes, I know, but let's have this uncomfortable conversation. Let's have this uncomfortable discussion. Let's bring it all out in the open. But that tends to frighten people. At my thesis show, a woman wrote in the book I had placed there for comments, "Child, you need Jesus!" and I just loved that, because you can tell that person was challenged by the work."

Interestingly enough, this work that some thought should be censored was the very work that brought Sheena Rose not only to a national, but indeed to international, attention. The curator David Bailey came to Barbados, saw the work and ended up commissioning Rose to do a site-specific work called "Town to Town," in which she used drawings to make an animation in which the artist explored the everyday urban life in Barbados. This work too was an immediate success, due in large part because Rose was one of the first artists on the island to dive head-first into installation and video art.

"That trip to New York changed me. It totally changed me. If people say one trip cannot change you, then they are wrong. In New York we attended various museums and so my fellow students and I got to examine, up close, works we had only read about before. The Whitney Museum! Oh my goodness! Talk about contemporary art! Installation, sound and video. I remember being at the Whitney and just staring at a large video projection for a very long time. I became an artist from that trip to New York. That trip radically altered my artistic practice and I always go back to New York as a weird kind of thank-you ritual, because I was just never the same after that first trip."

And neither was her art.

For someone who was involved in basically only painting and drawing, she became, arguably, a multidisciplinary and an interdisciplinary artist after that New York trip.

Following receipt of her bachelor's degree Rose did several residencies in the Caribbean and elsewhere. In 2009 her work was seen in Barbados by artist Christopher Cozier, who invited her to do a residency at a place called "Alice Yard"; another artist Anna Lee Davis created the "Fresh Milk" residency in 2011 to serve as a place for artists to make work once they were out of school, which Rose participated in; she did a residency in Cape Town, South Africa; and Rose herself started her own "Project & Space" in which she tried to match artist projects to spaces. "There is more attention being paid to Caribbean art and Caribbean artists," Rose conceded, "driven by the fact that the world seems to finally be waking up to the work being produced in the Caribbean. It is all very exciting."

That said, studying in the United States has forced clarifications for the artist that has made itself into her work. Her most recent drawings, for example, are replete with Caribbean iconography such as sugarcanes, which have taken on a more politicized understanding in this newest work. Memory, notions of home, and gender considerations have also become more assertive themes in her work. As well, she finds that now, more than before, she is questioning, and at times breaking, many of the taboos that she grew up with in Barbados. In her recent work, "A Bit of Gossip," she invited an audience into her home as she reenacted factual and at times painful moments from her life. In this work she was intentionally blurring the rigid separations of private and public space. She also cross-dresses in performances as a means of questioning gender identity and gender roles. And she has taken to using social media as "a kind of personal dairy."

Throughout our talk she mentioned that she often planned out her life in five-year allotments. So, naturally, I wanted to know what she hoped the next five years would look like for her. "I would like to go to Europe for a bit; maybe to England to get a feel of what the art world there is like. With regard to my work, I want to do even more installation, performance and animation work. I would really like to do a sculptural installation of one of my drawings, although I often say I am really a two-dimensional artist. But like I told the Fulbright Commission when they invited me in to do an interview for the Fulbright scholarship, I want to help develop the art scene in Barbados. That is really what I want to do. Barbados is my drive. It is really where I am focused on right now. I want to offer help to others in Barbados, like help was offered to me there. Right now my plan is to go back home to the Caribbean."

All images copyrighted to Sheena Rose and used with permission. 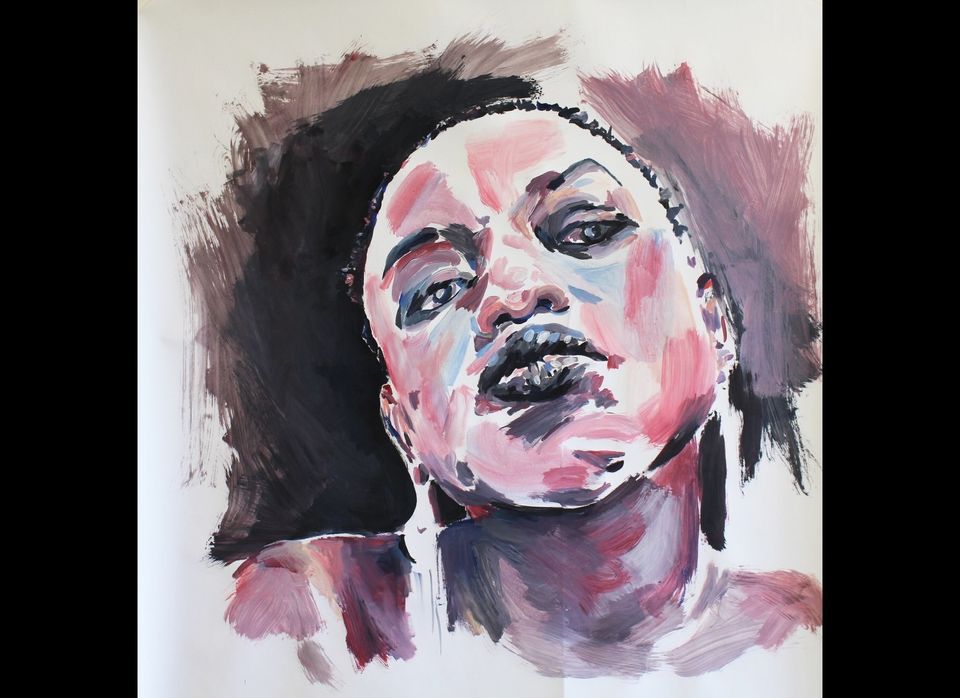