Two years ago this November, President Obama appeared on "60 Minutes" and reiterated his promise to close the Guantanamo Bay detention center.  This promise was seen by many as a first step to ending interrogation and torture methods employed by the United States government.  But as of July 2010, detainees remain at Guantanamo and little has been done to change U.S. interrogation policy. With the growth of supermax prisons, rising incarceration rates, and the influence of prison guard unions in states like California, prison reform is an issue the U.S. has only begun to come to terms with, both economically and legislatively.

On October 4, 2010, I sat down with artist, activist and Soros Justice Fellow Laurie Jo Reynolds to discuss her work with inmates from the Tamms Correctional Center, a "supermax" prison in Southern Illinois. All over the world, artists are engaging with timely issues and working with unexpected communities in the name of social justice. Laurie Jo Reynolds is one such artist who, in an effort to reform the US prison system, combines activism, social organizing, and experimental video. During the conversation, Reynolds spoke about her efforts to expose atrocities at Tamms and to change policies within the U.S. penal system. I asked Laurie Jo about her multi-level public art campaign, Tamms Year Ten, and what started her down the road of "legislative art."

Gregory Sholette: Where did your work on prison reform begin?

Laurie Jo Reynolds: I was a public policy major and was completely appalled that we [in the U.S.] have so many policies that are clearly counter productive to any goals we might have as a society, including public safety. Crime prevention policies and education really struck me as especially bad. We have high school drop out rates of fifty percent or more and prison recidivism rates of fifty percent or more. I worked with youths in housing projects, taught foster children, and certainly knew a lot of incarcerated and formerly incarcerated people. But about ten years ago, I met two mothers who had sons in Tamms supermax prison. I was so appalled and heartbroken at their stories. The more I looked into it, there really didn't seem to be any public policy justification for it. I started something called the Tamms Poetry Committee to do what seemed like the only thing you could do for somebody in long-term isolation with no human contact: send them mail. We sent poetry and letters to every single prisoner in Tamms, and we replied to those letters we received in return.

GS: And then you moved from the poetry project to directly targeting legislation surrounding the penal system. What prompted that shift?

LJR: There was a certain point where the prisoners were saying, "Hey, you know this poetry is great, but could you tell the governor what they're doing to us down here?" So the Tamms Year Ten project was born. We held hearings before the Prison Reform Committee of the Illinois House. We introduced legislation. We had lobby days, press conferences. We had a huge public education campaign with dozens and dozens of events: interventions and tactics that included blues concerts and fine art events and performances and panel discussions and state-wide prayer vigils and cultural projects and media correction projects and parsley eating contests. I mean, we had everything. We tried to saturate the market with information about the effects of long-term isolation.

GS: I understand that even journalists have largely ignored these virtually Abu Ghraib like conditions that exist right here in the United States. In seems supermax correctional facilities are using modern technology to carry out a medieval form of punishment, immobilizing the mind and body with physical restraint and constant surveillance. More like modern science in the service of retribution than reform.

LJR: Exactly. Exactly. We have absolutely moved as a society from encouraging rehabilitation and corrections to [a system] that is strictly punitive over the past thirty years thanks to "tough on crime" policies that pay no attention to the empirical evidence or results that [show these policies] are often contrary to public safety. With seven million people on probation, parole, or in prison in the United States, the system doesn't actually reduce crime and it doesn't reduce the number of future victims.

GS: But you have constructed a bridge into these shadows. I was struck by the similarity between current conditions inside Tamms and the way Frantz Fanon describes colonized people, in his 1925 classic The Wretched of the Earth, as forced into highly precarious, compressed spaces where they might die anywhere and at any moment. This humiliating immobilization reduces humans to the status of monsters. The colonizer then insists such monstrosities must be kept apart from normal society.

LJR: You're absolutely right. There are examples of people at Tamms who are so far gone and so mentally ill and so self-destructive that it is truly a challenge for the Department of Corrections to handle them safely and keep the staff safe. But if you start to look at some of these cases, you see that it's exactly as you describe. There was a cycle of violence and abuse that these people were part of that led to this. There are quite a few people in Tamms who came in with smaller crimes, robbery or whatever, in which they were serving ten years or less, and then, while in the prison system, they ended up getting assault charges. But [an] assault charge in prison can be something very dangerous and terrible or it can be something that's non-violent and doesn't really injure anyone, like throwing feces, throwing urine, shoving, or otherwise resisting the correctional officer. If somebody chooses to charge those people with assault, they end up getting years and years added to their sentence. So a lot of prisoners at Tamms came with shorter sentences and then got decades added. At the same time, a lot of them have mental illness or an inability to deal with institutional life. It's part of the cycle. Once they go to a supermax and they're in isolation or segregation, their behavior gets worse and worse. And then that justifies them being there.

GS: Could you tell me about the dreams or fantasy life of such isolated individuals?

LJR: Prisoners write to us about everything, including the "yard." The yard is just a concrete box, essentially--it's concrete on four sides--and it opens to the sky and there is a mesh roof on half of it. [An inmate wrote that] one day, a twig fell down [into the yard] and the letter just describes this twig...this bird must have brought this twig up there and just sort of dropped it. Being able to touch this twig and experience this twig was so profound to him.

GS: We are both aware of the modern cultural narrative that romanticizes the artist or intellectual who is placed behind bars for whatever reason. I'm wondering if you find the power of this myth useful or dangerous for the work that you're doing within the penal system?

LJR: I think it's dangerous any time you romanticize something that is just truly degrading. We work with a lot of ex-prisoners who came out of Tamms and they do not allow anyone to romanticize that experience. When you really talk about the worst things that happen in a supermax prison or in isolation, you're talking about people smearing feces on themselves and other people, throwing urine, mutilating their genitals, mutilating parts of their body in just unspeakable ways; people crying and screaming all night--just completely losing everything. On the other hand, some of the poetry and letters that we've gotten from these guys is eloquent and contemplative. Yes, some of them who committed murder and were gang leaders now express remorse and try to prevent youth from going into gangs through inspiring leadership. This change motivates people in our campaign. So there is truth to both things. These horrible conditions actually lead people to beautiful new insights, but there is nothing to romanticize about putting people through such conditions.

GS: Do you ever see this kind of art activism as a secular form of administering to those in need?

LJR: The problem with this question for me is that we're not really administering to the sick person, we're administering to the whole sick society. The United States has the highest incarceration rate in the world, with one out of every one hundred adults in jail. One out of nine of these [incarcerated individuals] is a black male, age twenty to thirty-four. Just in Illinois, seventy percent of all prisoners are in for non-violent crimes and fifty percent serve six months or less. Essentially, we now live in a virtual penal state.

GS: I guess what I meant was, what do you give those prisoners who are incarcerated for the long term?

LJR: You mean for those people who will seemingly never leave isolation, what do they get? I think they get the knowledge that somebody actually knows about them and thinks that they're human beings who are worthy of compassion. That is something their letters to us make clear.

GS: How do you prevent burning out Laurie Jo?

LJR: I think the main thing is just that it's been very inspiring as well as overwhelming. I've been able to see the good in really horribly maligned people. I also think of all the inspiring people that have made me keep going, including some Illinois legislators who have been courageous and principled because it was the right thing to do to change this situation.

GS: What kind of lessons have you drawn from this social art activism?

LJR: One of the major things I have learned is that the public policy we enact has zero to do with efficacy of the policy itself, and it has everything to do with how we demonize the group that's targeted by the policy, including what impressions we have from the media, legislators, etc. So real public policy work or media or artistic work has to involve fighting this demonization of whole categories of people, whether it's supermax prisoners, people with HIV AIDS, with addictions, with mental illness, homeless people, or sex offenders. [In the mid 19th century], Charles Dickens came over to the United States and observed the roots of this process. He has a kind of famous quote from 1842 about the Eastern State Penitentiary in Philadelphia that goes something like, "I hold this slow and daily tampering with the mysteries of the brain to be immeasurably worse than any torture of the body, and because its ghastly signs and tokens are not so palpable to the eye and sense of touch as scars upon the flesh--because its wounds are not upon the surface, and it extorts few cries that human ears can hear--therefore I the more denounce it, as a secret punishment which slumbering humanity is not roused up to stay." For a while, we had penal reforms in this nation that ended these practices. Those reforms have all but disappeared today.

Gregory Sholette is an artist, writer, activist, academic, educator, and is a consultant working with Creative Time on Artists on the News, a new initiative that brings artists' voices into contemporary journalism. 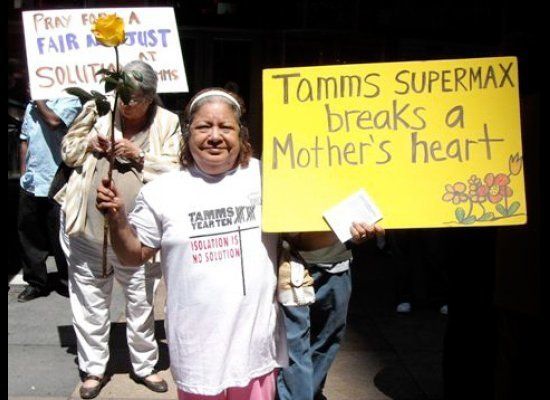 1 / 10
Geneva Mullins, mother of a Tamms prisoner, at a Tamms Year Ten rally.