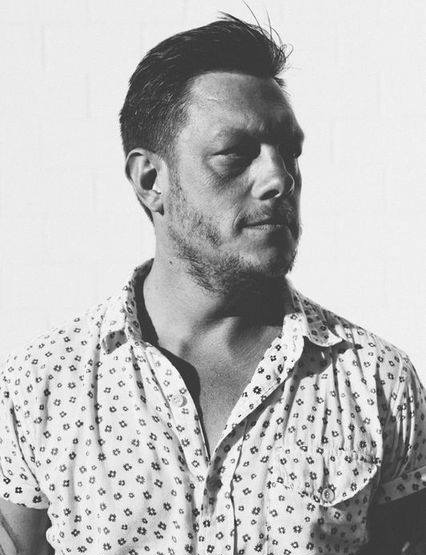 We've all heard the story before: a kid is raised in a super strict religious household and grows up to kill it in the music industry. It happened to Kings of Leon and it happened to Katy Perry. But what sets Avid Dancer's Jacob Summers apart (aside from him being fairly new to the scene) is his genuine unabashed enthusiasm for not only his own music (which brings to mind a low-key '70s beach rock movie), but for the music around him. Raised in a very strict Christian household, Summers didn't grow up idolizing MTV and learning the chords to whatever pop hit was blasting on the radio at the time -- he didn't even have the Internet. It wasn't until his late teens that he branched out into secular music, meaning that he still finds himself in a constant state of musical discovery. He grew up, joined the Marines, became a champion drumline dummer, and then moved to Los Angeles to pursue his own music -- which was constantly getting compared to bands he had never heard of, like The Kinks.

If you Google Avid Dancer, you'll find some Internet hype surrounding his first single Stop Playing With My Heart and some choice details about his life (including touring with several big-name artists like Hamilton Leithauser, Kopecky Family Band, Cold War Kids, and Warpaint), but you won't really get any sense of who he is and why you should pay attention. Which is exactly why we caught up with Summers before he took the stage at the Casbah in San Diego a couple weeks ago, where we chatted about musical discovery, thinking The Beatles sounded generic the first time he heard them, the time he thought he was auditioning to play drums for Elliott Smith, why people sometimes compare him to Morrissey, and why he refuses to put any pressure on himself musically. 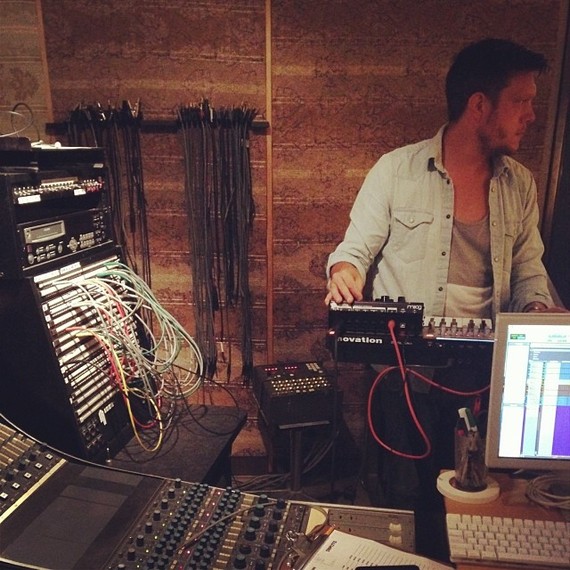 Mila Pantovich: What was it like discovering secular music?

Jacob Summers: As a Christian you are really cut off, completely, except for whatever Christian music you're allowed to listen to. So for me listening to music, almost all of it was...well all of music and everything you're supposed to do as a Christian is to glorify God, so I heard The Beatles for the first time [...] when I was in high school and it sounded fake....generic. Like maybe how people will listen to Christian music and [think], "That's generic." Just because it's on a different level. When I first heard non-Christian music I was kind of turned off by it, because I was like, "This isn't real. What are they singing about?" All this psychedelic weird stuff that they're doing didn't really make sense until after I was in the Marines, moved to California, and started smoking weed.

MP: It must have been a crash course in popular music.

JS: People would send me bands, like, "You've never heard of Elliott Smith? Dude." I remember somebody gave me an Elliott Smith burned CD, 'cause I had never heard of it, and then I was gonna audition for drums for a band for Elliot Hilton, and he also gave me a burned CD. I listened to this record Figure 8 thinking that that was the guy that I was auditioning for to play in his band 'cause I had never even heard it before. So I was listening to this Elliott Smith CD thinking, "Dude, if I get into this band, we are going to be f**king famous. It's so good." I showed up for the audition and was like, "That's a cool song, [but] let's try that second one on that CD you gave me." And they start playing this song that was not the song on the CD. "It was like, a waltz, you know? Remember?" And then he was like, "I don't know what you're talking about," so I went and put the CD in my car and [said], "This song." And he was like, "That's Elliott Smith. Not my band." 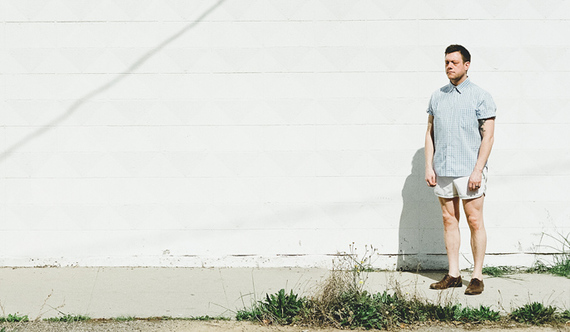 MP: Do you think growing up outside of popular music helped shape your personal sound?

JS: Maybe. The more music I listen to now, the more my music sounds like other people's music. When I was recording it, every song I did one at a time. I would do one song, save my money for the studio and do another song the next month. It was like, "I don't care what this band sounds like -- there is no band -- I'll just record any kind of song I want to and have anything on it." And as I would send the music out to my friends, they would be like, "Dude, that sounds like this band that I love. You know them right?" And I would be like, "No, I don't." I would listen to them and think, "Yeah, that does sound like that." Now, in my mind, I don't think that it sounds that different from other people's music -- I don't think it sounds as unique. When I was recording it I didn't know anything else that [sounded like it], but I also didn't listen to any other music.

MP: Do you feel pressure now to make something that you haven't heard out there?

JS: Personally, there are songs and then the skin that a song lives in -- the aesthetic, the instrumentation. There's always some weird thing that you can do to a song that will make it sound like you've never heard that sound before, but honestly I just try to write songs. I do so many versions of all my songs -- even on the EP there's an alternate version of a song that's on my album that's not even out yet, so it will be the first version that anyone ever hears and it's totally different. I don't really feel any pressure to do anything new 'cause I just don't put pressure on myself anyways. I'll work with a new person [...] that has a new perspective and just let them do what they do that will make it new enough that's not me. On my record there are three or four different drummers, I'm one of them, and eventually I just let other people drum on it 'cause they weren't as close to the song and they would have different ideas. 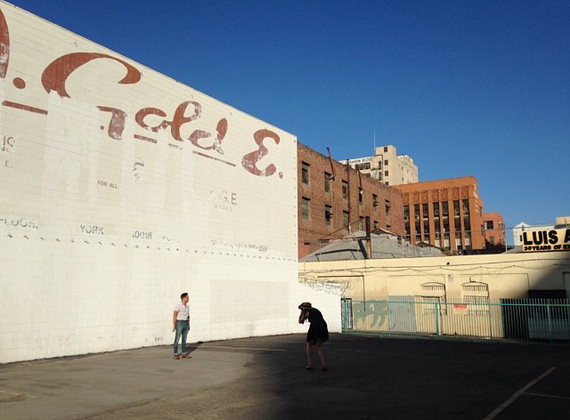 JS: I'm not a good guitar player or anything like that so usually I spend most of my time figuring out chords that I like -- 'cause I don't really know a whole lot of the chords that I'm playing. So, I'll figure out a song and usually at some point if I'm [...] really stoned or tired or something, one line will pop out. It'll be some honest thing that I'm really feeling [...] that I build around. What do I imagine also lives around that phrase? And then usually the lyrics will just go fast. But I don't have a whole lot of lyrics in my songs anyways [laughs].

MP: How would you describe your sound?

JS: I would say psychedelic pop music. It's not psychedelic music, [but] to me it is because I write when I'm stoned. But psychedelic can mean different things; to me if it's not a standard exact instrumentation and everything's not super linear, that's psychedelic. It sounds drugged out. I think they're pop songs that are just real loose.

Whatever references [people bring to it will change the sound]. I don't think it's on the record or anything but at the live shows, people are telling me lately, "Morrissey. There's Morrissey in there." It's not even on the album, but at our live shows they [see something]. I definitely sing different at the shows than I do on the album. 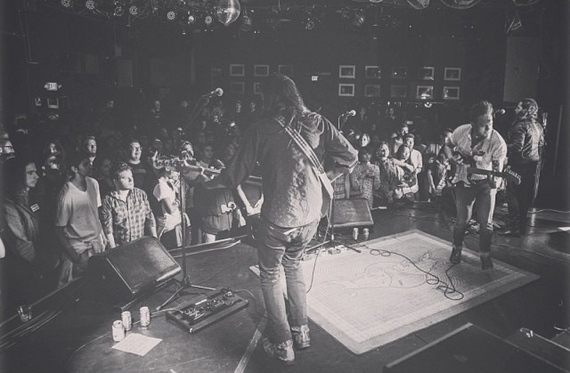 MP: When I saw you open for Hamilton Leithauser, I definitely didn't get a Morrissey feeling. He's just so dramatic.

JS: I know. I don't either. I don't even listen to Morrissey. I could not name you one Smiths song, I mean, I know I've heard them. But you never know what people are going to think about your music. Whatever they listen to, they'll find it in there. They'll put the pieces together, because that's what people do. There is one song where I definitely sang this thing that I don't normally sing and it's like this jump that he does on all of his songs. [Mimics Morrissey's trademark warbling yodel]. And so I did that on one of my songs, like if I'm just bored singing and I do it, and I realize that sounds like [Morrissey].

MP: So, what kind of music are you into right now? Any current favorites?

JS: I really like '60s soul music -- soulful old music. I like the recording style, the singing and the harmonies. [For new stuff], I love the new Arcade Fire record. That's the first Arcade Fire I ever listened to and I listened to it 'cause everybody kept telling me they hated it because it sounded so different from [their old music]. So I was like, "Great! I can't wait to hear it. I'll get to listen to this and tell you if it's good or not since your references are all f**ked 'cause you already know this band." I listened to it and [thought it] was freaking rad. It's like the Stones and Pink Floyd and it's real dancey and they're like, "I know, that's why I hate it!" 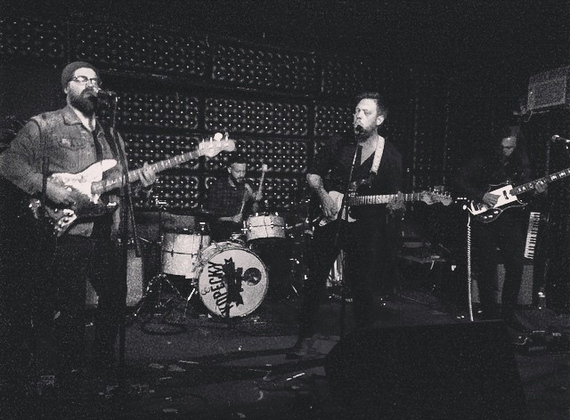 MP: Yeah, heaven forbid as an artist you try to do something new or grow.

JS: No! Just keep writing the same songs over and over again! Sometimes it works, sometimes it doesn't. Like the Bee Gees -- somebody dropped this old '60s Bee Gees record on me and it sounds like The Kinks. I had obviously only heard Saturday Night Fever and that stuff, and they really changed their sound and were really successful doing both.

MP: What's your favorite way to find out about new music?

JS: I like asking people, "Hey, what is your favorite music that you listen to?" Because most people are going to want to say something but will think, "Of course you've already heard that." But seriously, old, new, I don't care, what is something you couldn't not listen to? Most of the time people will say something that I haven't listened to. And they'll be like, "What!? We're listening to that right now." 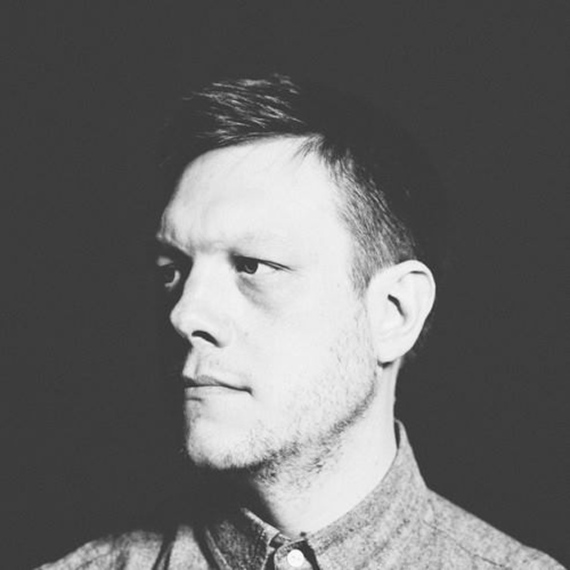 MP: How has touring been? Do you prefer your own shows or do you like opening for other bands the most?

JS: Oh, I like opening for bands. The idea of playing a show where we're the headliners terrifies me. There'd be nobody there, we're so new. We're lucky to be able to play for bands that are bigger for us and play for their fans; that's great. I certainly have played shows my whole life for five people and then to go and play for huge bands who have an agent makes my life so much easier. I am seriously so excited about some of the shows we have coming up. I mean, we're playing with Warpaint. And it's sold out. I don't even know what to say. So thrilled.

MP: Do you feel like things are gaining momentum?

JS: Yeah. I just signed a record deal with a really cool label [...] called Grand Jury, it's an imprint from Fat Possum. They're brand new. [And] it seems like nobody's hating on our songs on the Internet or anything. So yeah, I hope so. There's only one way to find out, just put your album out and if people like it, great. And if not...

*His EP called I Want To See You Dance is being released on October 21, with the LP tentatively scheduled for February 2015.