To the layperson, mollusks and insects might number among the most hideous creatures on the planet. But to biology buffs, the diverse groups of invertebrates are some of the most beautifully complex animals to ever walk, fly or swim.

Graphic designer Vladimir Stankovic is one so inclined. He might not be a malacologist or an entomologist, but his intricately designed GIF series "Cephalopodoptera" (which we first encountered on Design Boom), pays homage to the awe-inspiring diversity of arthropods and cephalopods alike. Titled to reference the word for marine mollusks (cephalopod) and the suffix associated with many insect orders (optera), the series depicts a fictional hybrid species.

In Stankovic's mythology, cephalopodopteras live in the world's deepest underwater caves. Bearing the wings of moths, the tentacles of squid, and the many furry legs of beetles, the creatures look like boldly-colored characters straight out of a science-fiction novel. Scroll down for GIFs. 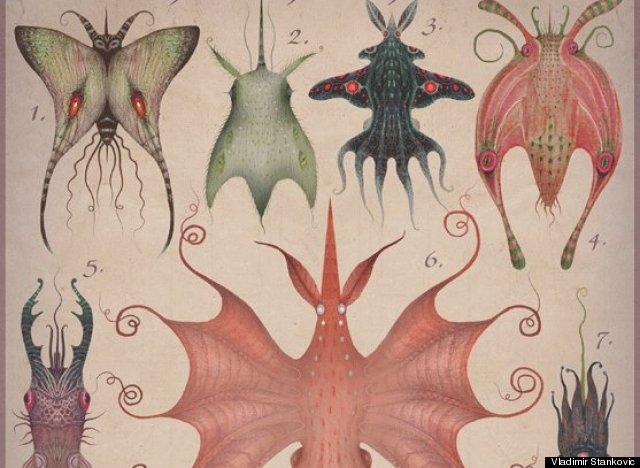 In an email to the Huffington Post, Stankovic described the inspiration behind his unique GIFs: "As I'm fascinated by both insects and molluscs (sic), I came to the idea to draw these imaginary species which are a combination of both. As a kid I spent hours reading and studying biology science books, so doing these type of illustrations was very natural, and making them 'animated' was a step further which made the process more interesting and fun."

In a blurb on his online portfolio Stankovic writes that "tests and experiments are being carried out in order to know more about these mysterious and elusive creatures." While we aren't taking the claim as proof of anything but Stankovic's whimsical mind, we are hoping it bodes more cephalopodoptera to come!

Check out the slideshow of Stankovic's underwater creatures below, and let us know what you think of his designs in the comments section. You can also see more work from the Serbian-born, Finland-based artist on his website.