Hang onto your cappellos Venice, Italy -- the future brides of the sea have arrived.

In what has to be the mother of all gay marriages -- or artistic wedding concepts in general, for that matter--artists Annie Sprinkle and Elizabeth Stephens have taken their Love Art Lab experiment to Venice, Italy.

The couple plan to get married in a performance art wedding at a pavilion dubbed Fear Society at the 53rd Venice Biennale on Friday Aug. 28.

The buzz on Sprinkle and Stephens has been growing steadily for several years now. More than four years ago, the creative couple embarked on a riveting seven-year art project that finds them exchanging marriage vows annually in themed performance art weddings around the globe. They're currently in Year Five of their curious artistic project, which was inspired by artist Linda M. Montano's "14 Years of Living Art."

Each year (each wedding) comes with a different mission and color, which, to use open-minded/spiritual vernacular, corresponds to one of the seven chakras.

The color red, for instance (the first chakra), launched the pair's first wedding back in 2005. The theme was security. Last year's extravaganza, held at UC Santa Cruz in front of more than 400 people, boasted an eco-conscious theme. The color scheme was, naturally, green (heart chakra) and the brides married themselves to Mother Earth, requesting participants to engage in an ongoing practice of being more eco-friendly. They also boldly suggested that everybody begin viewing the planet as "Lover Earth."

"We really took it seriously," notes Stephens, a multi-media artist and professor of art in the San Francisco Bay Area. "The term Mother Earth implies that the Earth has a responsibility to take care of us. But our problems are too big now. Humankind is too mature to have Mother Earth taking care of us. We need to have a "lover earth," where we're taking care of the Earth as our lover."

"And to inspire others to take advantage of all the sensual delights and the energy the Earth has to offer," adds Sprinkle, who, among other provocative titles, is known as an artist, sexologist, feminist, pioneering film director and college lecturer.

Deep and esoteric? That's the idea.

Needless to say, the couple, who "officially" married as a gay couple in Canada during Year Three of the seven-year artistic endeavor, have been generating international attention during the venture, which originally grew out of their response to the violence of war, the anti-gay marriage movement and, as they quip, "our prevailing culture of greed -- our projects are symbolic gestures intended to help make the world a more tolerant, sustainable, and peaceful place."

This year's outing -- Year Five -- is a blue color scheme (throat chakra). The theme: sex-ecology and communication. In addition to exchanging vows to each other, the duo will marry themselves to the sea. 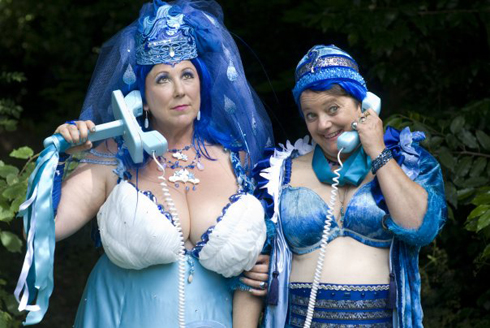 "This is the year of communication for us, and also the year that we are doing two weddings," notes Stephens, "We did a wedding in Oxford, England, where we were got married to the sky."

Sprinkle also notes that during the past year they became "sex-ecologists."

"That grew out of the response to 'Lover Earth,'" Stephens chimes in. "Because we're ecologists -- we're trying to help the Earth -- and we're sexologists. We think sex is a fun ecological system."

A fruitful one at that.

Clearly, the work of Sprinkle and Stephens pours out into the community. Their performance art weddings inspire others to take action. The art generated from the events is placed in art installations that appear in prominent art galleries around the world.

Regardless, when most traditional marriages seem to center only on a couple and the couple's love for each other -- notice how that model has been working -- it's downright refreshing, riveting perhaps, to discover a duo whose love and aspirations extend far beyond themselves.

Imagine that -- a love that is bigger than you and yours? Emotional Viagra for 21st centurians exhausted from Tweeting and Wii-ing all over each other. 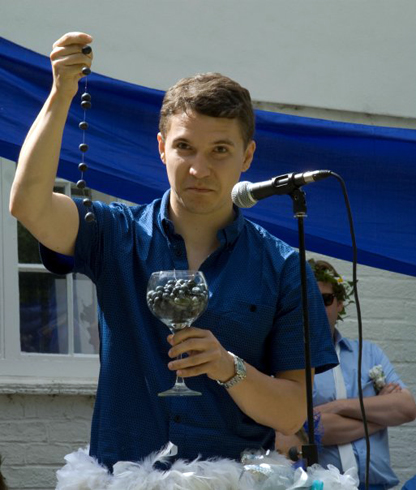 Learn more about the performance art weddings of Annie Sprinkle and Elizabeth Stephens at loveartlab.net. For a glimpse at last year's GREEN WEDDING, click here.

Pictured at the Oxford Blue Wedding in May: Top: Sprinkle, left, and Stephens. Bottom: Rolf Baltromejus, who performed a poem dubbed "Blue Love Interest"--like pearls, he proceeded to put a string of blueberries in his mouth and then removed the string leaving only the blueberries, which he swallowed.

COMING SOON: Blog 2 on the BLUE WEDDING IN VENICE.